Google is a great company — from its record $23 billion IPO in 2004 (at a time when Nasdaq was below 2000!) to its dominant mobile OS. My associates and I have such an admiration for Google that we built our latest web conferencing platform with Google’s technologies. 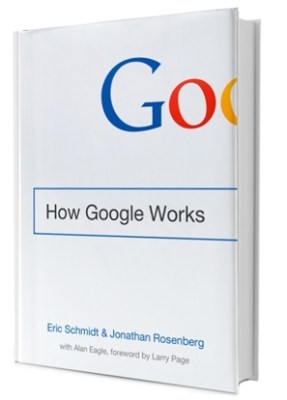 But we also know that Eric Schmidt, together with other key executives at Google have contributed to this success through a stable management since the early days. As a fan of his, I’ve followed most articles, interviews, and slides about his latest book How Google Works and eventually read it. It’s an interesting book that reads like a story. I highly recommend it, but not as a management book the way the authors seem to position it, because it may take technology startups in the wrong direction. In fact, I think Schmidt and Rosenberg are totally wrong about how Google works. Here’s why:

First off, the authors are confusing causation and correlation. Schmidt points out a series of characteristics of Google as a company and presents them as the reasons for Google’s success, but in my opinion, they are all consequences of Google’s success.

For example the authors write: “Their plan for creating that great search engine, and all the other great services was equally simple: Hire as many talented software engineers as possible, and give them freedom.” Well, this worked because the search was already successful enough to fund that freedom. I would love to see one single company that isn’t dominating a market with no cash cow in-flow that can succeed without strict discipline, sharp focus, hard work, and hands-on management.

If this management style is the reason for Google’s success, then why have the majority of initiatives at Google either failed or been financially inefficient and unprofitable? If they were standalone startups, they would have most likely already been dead.

Another special characteristic of Google is its sales force. When interacting with sales people at Google, I am shocked to see how untrained and inefficient they are. If there are known companies with great sales cultures such as Oracle, or some older models such as IBM or Xerox, that could sell literally any product in their portfolio, Google is that other extreme, where sales reps have exceptional products in their baskets but are unable to sell them. The truth about Google is, their products don’t sell, they get bought!

Schmidt and Roseberg know that 90 percent of Google’s revenue comes from advertising (thanks to Google’s de facto monopoly in search) . According to the company’s 2013 financial filings, 83 percent of Google’s revenue came from ads, about 7 percent from Motorola (which is now gone), and 10 percent from everything else. In other words, when you add up all the revenue from Google Apps (Gmail, Docs, Drive, Maps, etc.) together with the Android and other mobile businesses, and then add Chromebooks, Chromecast, Chromeboxes, and everything hardware and everything Chrome, Google Developers Network, Google+, Google cars, Google robots and drones, Google Glass and other wearables, Google Cloud, and everything else in the Google world, you get $5 billion or 10 percent of Google’s revenue. Peanuts! Google does not disclose the split of cost among different business units, but it’s not hard to imagine their level of profitability if they were independent entities. 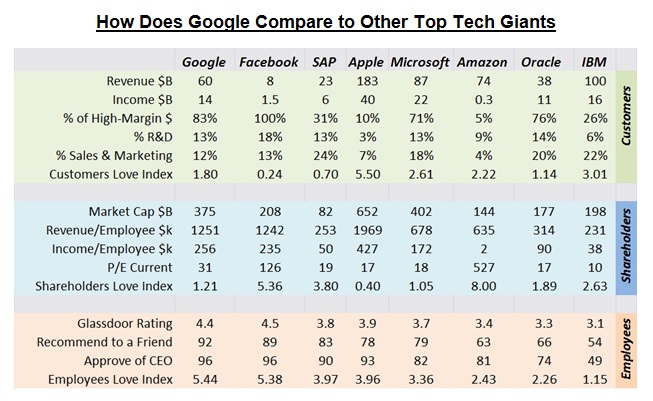 Above: A comparison of eight tech leaders. All financial data are extracted from companies’ public statements. Employee appreciation data includes data extracted from Glassdoor public ratings. “Love Indexes” are created by the author as a way to quantify and compare numbers from different viewpoints. High margin = software, subscription, ads, everything that is neither hardware nor requires labor to bill (support, consulting, etc.).

Although Google is perceived as heaven for its employees, the viewpoint from shareholders is a bit different. I am not saying Google’s shareholders are unhappy, but the company’s use of its profit and capital is not optimized.

Let’s compare the efficiency of Google with IBM. IBM may no longer be considered a hot company, but you may be surprised by the comparison of financial and management performance: IBM’s business is only 26 percent software (or revenue composed of high margin dollars, i.e. dollars that don’t require labor delivery or support or manufacturing); for the rest, the company has to deliver man/days for dollars. Google;s business is 83 percent high margin (90 percent in 2014). That’s why IBM’s business is by nature much less profitable: $38,000 of income per employee compared to Google’s $256,000k per employee. Google’s business is seven times more profitable. Yet the Price per Earning of Google is only three times IBM’s. Google’s P/E ratio is comparatively very low; it’s four times less than Facebook and half of Microsoft’s in the ’90s. Not to mention Amazon, which, despite being hardly profitable, has a market cap of over $140 billion.

Amazon and IBM use their funds more efficiently and are more loved by investors, although, granted, they’re less popular among their employees.

So what makes the difference? How does Google work?

The key is market dominance. If you have a de facto position of a monopoly in your market, money pours in, and you can afford to give your employees even more than 20 percent of their time free.

Google is in a situation of monopoly with its search business. In the above table, the reason Facebook and Amazon have high P/E is that investors consider them to be either in or near a monopoly position, while IBM, and to a lesser extent Oracle, are competing and have to work hard to keep their leadership positions. (Amazon’s monopoly in book publishing is already achieved, but Amazon has real challenges in other markets).

Last month, during a course at Stanford, Peter Thiel, PayPal’s founder, advised entrepreneurs to seek monopolies, stating that “competition is for losers.” As long as Google has its monopoly in search, Googlers can enjoy free food, don’t need to worry about sales skills, and can take 20 percent time off or more. But when that changes, the company needs to be ready for the shock.

In conclusion, each company needs to find a culture, methods, and processes that work for its individual circumstances. There are rarely one-size-fits-all concepts, and those that do exist are the good old ones: Innovation & Quality, Customer Satisfaction, Employees Development & Education, and Financial Performance. Everything else is just context based.

[The opinions expressed in this story are solely my own and do not express the views or opinions of my company.]

Darius Lahoutifard is an Enterprise SaaS Executive and Enterpreneur, the founder of Business Hangouts, an Enterprise App for Google’s Hangouts on Air. You can follow him on LinkedIn here or follow his company on Twitter here.