Adblock Plus, an open-source content-filtering and ad blocking plugin for all major browsers, today announced a new feature for Facebook users: the ability to turn off read receipts. In short, you can now prevent Facebook from telling senders you saw their messages.

If you already have Adblock Plus installed, all you have to do is click here and then hit “Add.” Doing so will enable the “Message ‘seen’ Remover for Facebook” filter in your Adblock Plus preferences.

All this filter really does is block the following URL: facebook.com/ajax/mercury/change_read_status.php$xmlhttprequest. As a result, you no longer have to be caught in situations like this: 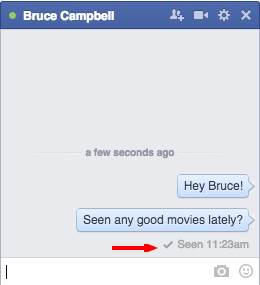 Imagine Bruce is your boss, it’s Saturday, and he has the brilliant idea of getting you to work on your day off. If you turn this feature on, Bruce will never know whether or not you’ve read his message: 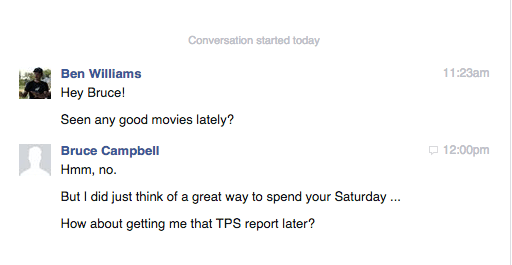 Notice that Bruce has not been told that his messages have been read. Now working on Saturday isn’t up to Bruce.

Read receipts are very useful features, but they do have their downsides. Adblock Plus lets you turn them off, but it would be nice if there was an option to flip that switch on the fly (manually removing and adding the filter would be tedious). After all, most of the time you don’t mind if your friends know you read the message.

Nevertheless, if you just want to stop everyone from seeing when you’ve read their Facebook messages, this is for you. Just remember: This only works on desktop browsers, as Adblock Plus is not as powerful on mobile devices.

On the desktop, Adblock Plus lets you block up to 21 different Facebook “annoyances.” These include promoted posts, sponsored stories, sidebar targeted ads, upcoming events, requests to rate media, and “people you may know.”

Facebook, for its part, has yet to do anything about this feature set. If enough Adblock users turn features like this on, however, we expect the company won’t sit quietly.