Intel lifted the lid on an all-new platform today, one that it hopes will help Stephen Hawking, and millions like him, communicate more easily.

Physicist, cosmologist and all-round smart cookie Hawking has been one of the world’s leading thinkers over the past few decades. But what’s perhaps more impressive is that he has remained at the forefront of scientific endeavors while suffering from a debilitating motor neuron disease (MND) that has left him almost entirely paralyzed.

Hawking has been wheelchair-bound for more than four decades and has increasingly relied on the advancements of technology not only to get around, but to communicate his ideas to the world.

For the better part of 20 years, Intel has been gifting Hawking a new custom-built computer every few years or so. And in recent times, things have gotten pretty high-tech, as the professor controls his computer through cheek-movements, which activate an infrared button attached to his spectacles. This in turn lets him select individual characters on a screen one at a time to create words, sentences, and research papers. 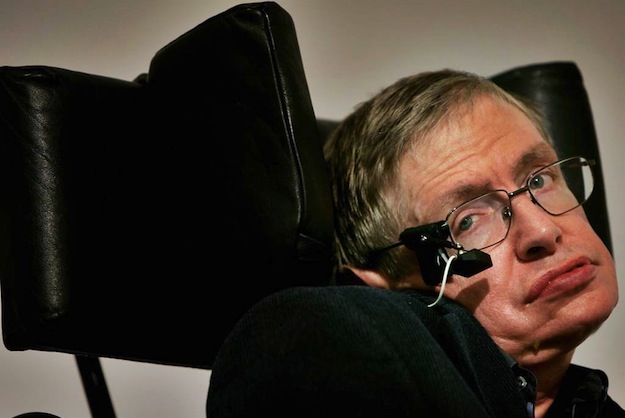 It has largely been a long, drawn-out process though, with each word taking around one minute on average to create, though a digital synthesizer can speak it out for him, which helps when giving lectures.

However, Intel has been working to streamline the communications process in recent times with its perceptual computing program, looking at new ways to enable interaction through things like eye-tracking, facial expressions and more.

Intel hopes that its latest technology can expedite Hawking’s — and others’ — ability to communicate. Intel demoed the new software interface on stage with Hawking earlier today, but the company says that it will open a “customizable solution” to researchers and developers in January, letting them adapt it for others with MND and quadriplegia, with support for input through touch, blinks, eyebrow movements, and more.

A team of researchers has been working in tandem with Hawking for the past three years to develop the Assistive Context Aware Toolkit (ACAT). The new interface apparently enables Hawking to type twice as fast, with an estimated tenfold increase in other tasks, such as browsing the Web and managing emails and documents.

But how can it do this? Partly it’s thanks to London-based technology company SwiftKey, famous for its smart, predictive keyboard app for Android and, more recently, iOS. SwiftKey has been working away behind the scenes for the past couple of years with Hawking to develop its technology specifically for him.

With SwiftKey integrated, the system can learn from Hawking and predict the characters and words he plans to type next based on historical patterns, with this data funneled through to his speech synthesizer. SwiftKey has also tapped Hawking’s historical works (not all of which have been publicly published) to help it more accurately predict his next words in this bespoke version of the software.

While SwiftKey’s consumer-facing mobile keyboard apps offer three possible choices for your words, Hawking will see 10 predictions at any given time, which gives him more options for his next word.

Meanwhile, the new Intel platform will be made available for free in the new year so that the larger research and technology community can tweak it and integrate it into their own developments. It’s worth noting here, however, that SwiftKey’s involvement is restricted to bespoke, individual cases such as Hawking – it won’t be made available open-source with Intel’s rollout in January.