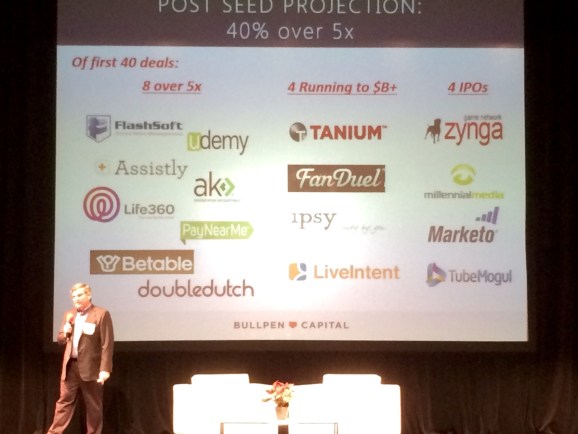 Duncan Davidson showing off some of Bullpen's investments

SAN FRANCISCO — Most investors and entrepreneurs think of funding as occurring in neat stages (seed, Series A, Series B, etc.), but the reality is far blurrier.

Because of that, says Bullpen Capital managing director Duncan Davidson, there’s a “post-seed” strategy that can pay off well for early-stage investors.

Speaking at the Post-Seed Conference, Davidson laid out for the audience the idea that investing after the initial seed investment but before the first traditional institutional round — aka at the post-seed stage — has emerged as a way to maximize on early stage investment. The goal is to get in early, help the company pop to a “supersized Series A,” and get a big return on the investment.

As Bullpen views it, the post-seed funding happens when the company has raised about $2 million in funding. The extra post-seed round is for $5 million, and the company raising it is hoping to get to that “supersized” Series A for at least $10 million. (Read more from Bullpen’s thoughts on the supersized Series A.)

Now, the reason why these early stage investors, like Bullpen, go after this strategy is because there’s only a small number of companies every year that will go on to be truly successful. Y Combinator founder Paul Graham estimates it is only about 15 companies.

So really, post-seed investing is about catching these 15 startups before they’ve fully emerged and are raising their big first rounds.

Or, as Davidson also put it, “The goal of post-seed isn’t to get to an A round, it’s to get to a super A round.”