Update 12/3/2014: Sonos initially declined to comment about the Form D, but later clarified to say that the $130 million was done as a secondary equity sale — not a new funding round as initially reported. “The funding is just a secondary round strictly raised as a part of our ongoing liquidity program for employees not a new round of capital,” a Sonos spokesperson told VentureBeat.

Sonos is a leader when it comes to consumer smart speaker and home audio devices, which allow you to wirelessly access digital music stored on computers, mobile devices, and streaming music services like Pandora, Rdio, and Deezer. As more people ditch their CD collections (and even iTunes libraries) for streaming services, Sonos’ products are well-positions to be attractive to a new breed of music fans. 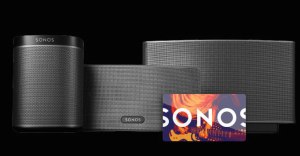 On top of that, premium audio systems and speakers are getting renewed attention thanks to Apple’s $3 billion acquisition of Beats Audio. That said, it’s not entirely surprising that Sonos is raising such a large round of funding.

Founded in 2002, the Santa Barbara, Calif.-based startup has raised a total of $325 million* in funding to date. VentureBeat is reaching out to Sonos for further comment on the round, and will update this post with any new information.