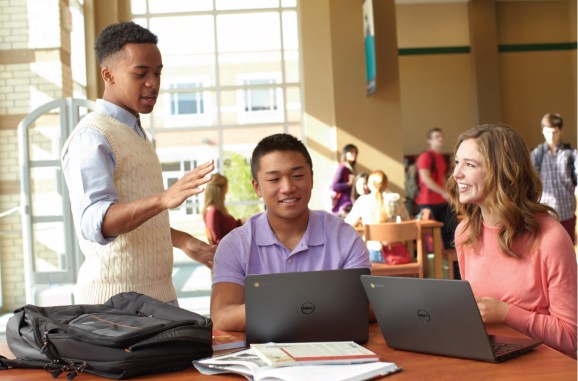 For several months earlier this year, my family toured various middle schools in Oakland, trying to figure out where to enroll our oldest son. As we visited different classrooms, one scene kept repeating itself.

A school administrator would wheel in a cart piled high with Google Chromebooks. The Chromebooks would be distributed to the students in the classroom, who would log on and start working through various assignments and lessons. When class was over, they’d log out and place the Chromebooks back on the cart for someone else to use.

For me, this simple scene explains why Chromebooks are now outpacing iPads in classrooms, according to numbers released this week by research firm IDC.

In the third quarter, Google shipped 715,000 Chromebooks to schools compared to 702,000 iPads from Apple. IDC said this was the first quarter Chromebooks had beat iPads in the classroom. And it’s just one more body blow to the iPad, which is facing a projected decline in sales for Apple’s current fiscal year.

Don’t underestimate how much this might bother Apple. The company has a long history in the education market, going to back to the early 1980s. And more recently, chief executive Tim Cook had taken to routinely boasting about the iPad’s appeal to educators.

A year ago, in an earnings conference call, Cook said Apple had 94 percent of the education tablet market. “I’ve never seen a market share that high before,” Cook said at the time.

It’s an impressive statistic, and one that turns out to be totally misleading. The real competition for Apple is not other tablets in the classroom, but Chromebooks. It was just a couple months after Cook’s remarks, which led me to assume that every educator was buying iPads, that I saw the parade of Chromebooks in Oakland.

So what about the scene made an impression on me?

The first thing is what it said about hidden costs. The IDC report notes that Chromebooks, at $199, are cheaper than iPads, which the firm pegs at $379 with educational discounts.

In fact, in a controversial Los Angeles Unified School district program, the iPads the district bought cost $770 with all the educational software included. The program, which originally intended to purchase an iPad for each student, turned into a fiasco when students disabled features to limit their use, and the district failed to think through many of the administrative policies. (Such as: If the student breaks the iPad at home, who pays for a new one?)

Of course, with the iPad, you pretty much have to give each student their own. As anyone who has an iPad knows, it’s difficult to set up multiple user accounts on the device. And if you don’t send the iPad home, then for many of the apps, a student would need to have an iPad at home to download and use the same services.

Chromebooks are not just cheaper per unit, but they are easier to share, letting school districts buy fewer of them. You hand them out, students log into their account online, and they hand them back when they’re done. At home, since the curriculum is accessed through a browser, you can use pretty much any type of computer you already have at home to keep doing your work.

The other issue that makes the cost gap even bigger is the keyboard. School districts across the country are adopting the controversial Common Core curriculum, which involves a lot more writing for students to encourage more critical thinking.

Yes, you can write on an iPad. Yes, you can buy a keyboard for an iPad (adding even more to the cost). But in the case of L.A. Unified, the district realized after the fact that students would need a keyboard to be able to take the standardized tests that are part of Common Core. This essentially made it a mandatory item.

As a result of all these headaches, the district found that only one out of 245 teachers were using the costly software it had purchased for the iPads.

All of this is why Ed Klein, an educational consultant, had advised Oakland to go with Chromebooks over iPads.

“Yes, there are physical keyboards for tablets, but they better have a wired connection because managing 25 to 100 simultaneous Bluetooth-connected keyboards sounds like a mess — not to mention the additional cost,” he wrote on his blog. “I often hear about how tablets are great for consuming music, video, and reading text but not great for producing documents, spreadsheets, and presentations. The iPad can be used to create wonderful content, particularly within a specialized app like Popplet or Toontastic, but I don’t think students would enjoy writing their term papers on it. Thus, I arrive at a clear choice: laptops with a fully-attached, mechanical keyboard.”

Of course, there have been rumors that Apple might release a bigger iPad with a keyboard. This would likely help with both the education and business markets. But in doing so, the company would be forced to acknowledge the limitations of the iPad.

In the meantime, educational customers are voting with their feet. And their wallets.

Last week, L.A. Unified announced that it had changed its purchasing policy, once restricted to just iPads, to give schools a new option for computers in the classrooms: Chromebooks.