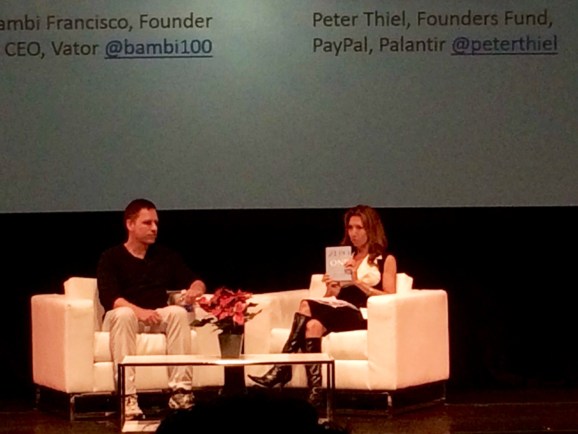 SAN FRANCISCO — Peter Thiel spoke today to an audience of entrepreneurs and investors at the Post-Seed Conference, and, as usual, he had some strong advice: “Be scared of platforms.”

The billionaire investor’s warning wasn’t so much literal as it was a warning against buzzwords and the idealistic pipe dreams they can represent. Nowadays, everything is a “platform,” but just because a startup calls itself a platform doesn’t mean their product can live up to it.

“I would say that, systematically, I’m skeptical of all trends,” said Thiel. “Every trend you could name, I think it’s overrated. You should be thinking ‘fraud.’ You should be running away from it.”

Rhetoric can belie a troubling lack of substance, Thiel cautioned. “It’s not about looking and understanding the data, it’s when people default to buzzwords,” he said.

These buzzwords are also closely linked to another danger Thiel warns founders against: thinking you’re special and have no competition.

Say you run a restaurant in San Francisco — you’re the only Nepali-French-vegan-burger joint in the city, and you think that means you have no competition.

Thiel is here to remind you: You run a restaurant in San Francisco. Your competition is everywhere.

“If you want to compete like crazy, you should open a restaurant in San Francisco,” Thiel said. Thiel advises companies instead to look for markets where they’ll have as little competition as possible. This is right in line with the Paypal cofounder’s famous quote (from his recent book): “Competition is for losers.”