Sega’s Creative Assembly has announced it is making a new free-to-play game dubbed Total War Battles: Kingdom for the PC, Mac, and tablets.

The new game combines building a realm and fighting large-scale tactical battles. You can build your cities, upgrade your armies, and duel with your neighbors. Over time, you’ll be able to join massive multiplayer wars against other lords in a fight for the throne.

It will be interesting to see just how good this game looks on tablets. Moore’s Law (the doubling of the number of transistors every two years) is making mobile devices as powerful as computers of a few years ago. That means that PC-only games are migrating to servers and mobile devices, without too many tradeoffs in the look of the graphics or the speed of the gameplay. You can tell from the screenshots and video that the game is still a smaller subset of the larger PC games. But it gives players a lot more to enjoy than many mobile games that are popular now — something that should help it stand out in the ultracompetitive mobile gaming market, which according to market researcher Newzoo could hit $25 billion by the end of the year.

“Adding depth, persistency, and learning from our experience with Total War Battles: Shogun, we wanted to create a new way of playing Total War Battles. Whether that’s on the move or at work over lunch,” said Renaud Charpentier, Creative Assembly’s digital project lead. “It shouldn’t matter where you want to play; we want to make it easy to come back again and again to your flourishing Kingdom. Then, we ramp up the complexity and challenge, adding more options to your Machiavellian schemes.”

Kingdom is “bigger, richer, and deeper gameplay” than other free-to-play games, and it’s a step up from Creative Assembly’s first dip into free-to-play, 2012’s Total War Battles: Shogun for Android and iOS devices. 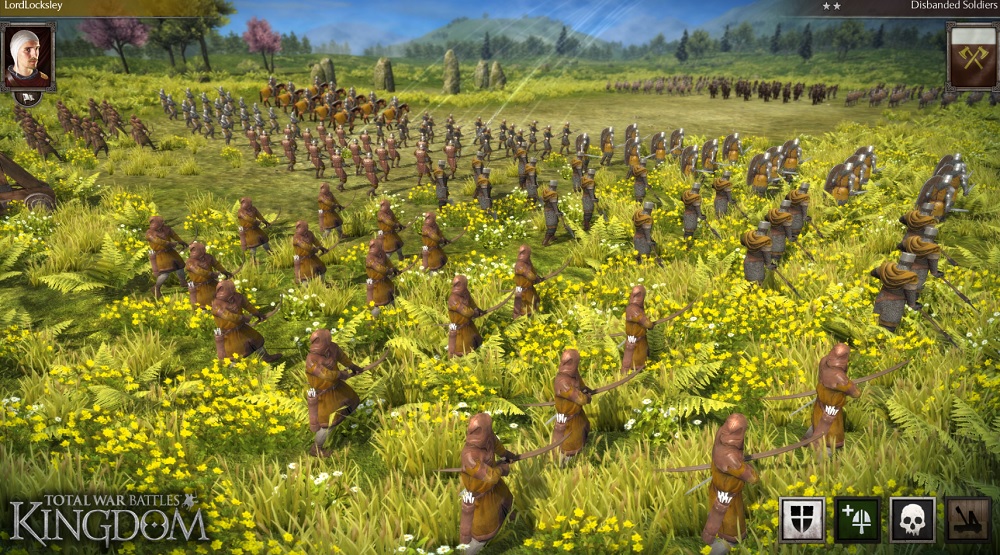 This new mobile Total War is a stripped-down version of the larger PC games, where you can manage thousands of soldiers fighting in real time. But it has features such as deception, spying, and outright betrayal. You can register now to apply for closed beta access.

The Kingdom world is a persistent-world strategy game, set in 10th-century England, as the nation is emerging from the Dark Ages. Kingdom is a server-based game where you play on any platform you wish, and you can even switch between PC, Mac, and tablets as you log in.

Creative Assembly is building the new game with a team of 20 developers, compared to six for the original Total War Battles.