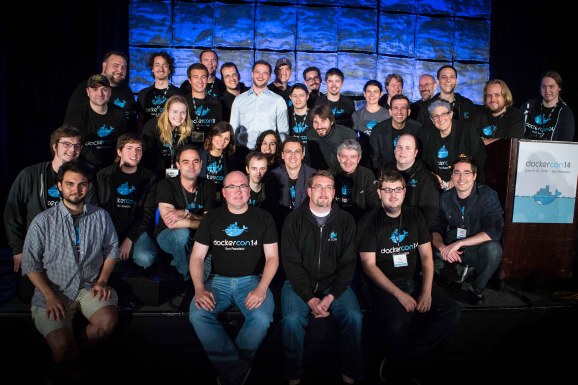 At its user conference in Amsterdam today, the executives of hot startup Docker are pulling the covers off new features to maintain and run applications packaged up in the container technology Docker released in an open-source license last year.

Now, less than three months after announcing a new $40 million funding round, Docker is revealing tools that companies can use — and pay for — to handle serious applications encapsulated in Docker containers. And first up is Docker Hub Enterprise, a new enterprise-friendly storehouse for keeping Docker-style applications.

“As those [Docker-based] applications become true business differentiators, [businesses] need to have [those apps] behind their firewall, aligned with workflows that have to be set up in a place with security and governance, to make sure that all I’s are dotted and T’s are crossed in that regard in the application life cycle,” David Messina, Docker’s vice president of enterprise marketing, told VentureBeat in an interview.

Consider it Docker’s next step on the path to becoming a formidable software company, not just a startup whose open-source project a few developers have tried out.

Docker Hub Enterprise will become available in an early-access program in February. It comes several months after Docker came out with a hosted service for privately storing applications packaged up in Docker containers.

Also today, Docker and IBM issued a joint statement that included the announcement of the beta release of the IBM Containers service for running containerized applications on the IBM public cloud. Cloud providers like Joyent and Amazon Web Services have announced similar services in recent weeks.

Under its new strategic partnership with Docker, IBM will also start selling the Docker Hub Enterprise alongside other products, according to a statement.

The news from Docker comes a few days after CoreOS announced new App Container technology that amounts to an alternative to Docker containers, as well as a new runtime for the new App Containers. Developers and cloud industry observers have since gone back and forth discussing the new technologies ahead of the Docker conference this week.

The comments have not always been positive, particularly among some Docker executives. But if anything, all the banter suggests that a container market is forming. Today’s announcements suggest that Docker wants to be the leader of that market.