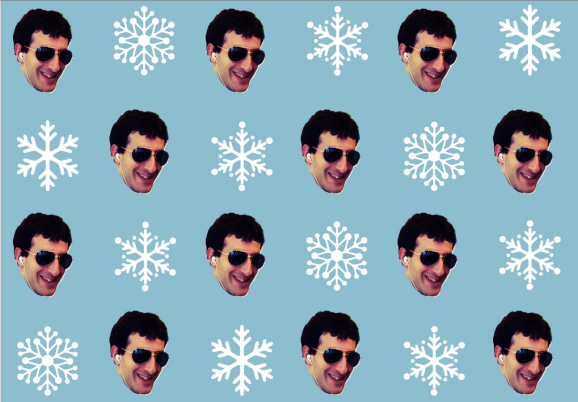 This holiday season, you should give the gift of ultimate vanity: Stick a loved one’s face all over the wrapping paper you use for their gift.

Thanks to the fine folks who built Gift Wrap My Face, you can now do that — or chose gift wrap with your own face, or with the faces of completely random people. Go crazy.

The move is part of a popular trend of services repurposing people’s likenesses into other things. For example, a few months ago Imoji tumbled onto the scene, enabling emoji- and sticker-crazed fans to make messaging stickers (aka emoticons) out of their selfie photos. And those Imoji stickers can even be shared via text messages, WhatsApp, Facebook Messenger, KakaoTalk, Twitter, and Instagram. Users created more than 1.5 million stickers with the app in less than a month since its launch, Forbes reported in August. And with the holiday season upon us, this trend has now come to wrapping paper.

While Gift Wrap My Face is a silly product, it’s still an interesting development in our society’s fascination with selfies and silly representations of ourselves. And even more than the finished product, what is most impressive might be the company’s achievement in building out the process that allows for the gift wrapping to go from a pattern the customer designs on the website to a roll of wrapping paper.

But wrapping paper is hardly the only notable service spotlighting our love of selfies. Apps like Shots — “that Justin Bieber-backed photo app” — are taking off, with thousands of users uploading picture after picture of themselves. (Rumor even has it that Twitter is considering acquiring the Bieb-backed app.) Also, Frontback lets people capture reaction selfies to whatever they’re looking at, and Facebook’s Snapchat clone Slingshot processes all kinds of selfies every day.

And these are just a few of the services exploiting — and rewarding — our self-love.

So in a way, a lot of these apps, services, and products might actually be making us accept having our faces so exposed and easily available. And I say that as someone hugely picky about which photos of myself I allow to exist.