Self-destructing messaging is coming to the desktop today in a new update from the ephemeral messaging app Wickr.

“We’re trying to become the pole-position app. We think you need desktop in order to do that,” said Nico Sell, founder of Wickr. The new desktop application means that Wickr users can receive self-destructing messages, pictures, and videos across all their devices, available for Mac, PC, and Linux operating systems.

Sell wants to change the way we communicate by fleshing out text messaging with document and image attachment capabilities, with the ultimate goal of replacing your email service. Already Wickr’s mobile app has the ability to attach PDFs to messages, though the desktop version lags behind here. Doodles, a mobile Wickr function that allows users to send digital sketches to one another, are also missing from the desktop version.

Though Sell talks broadly about replacing email, many of her contextual examples reside in the workplace. She likens it to document shredding and says that self-destructing PDFs are the business documents of the future. However, it does seem problematic from a business perspective that messages self-destruct after only six days. Sell says in the future Wickr may extend that time frame from several days to years — depending on the demand from consumers. 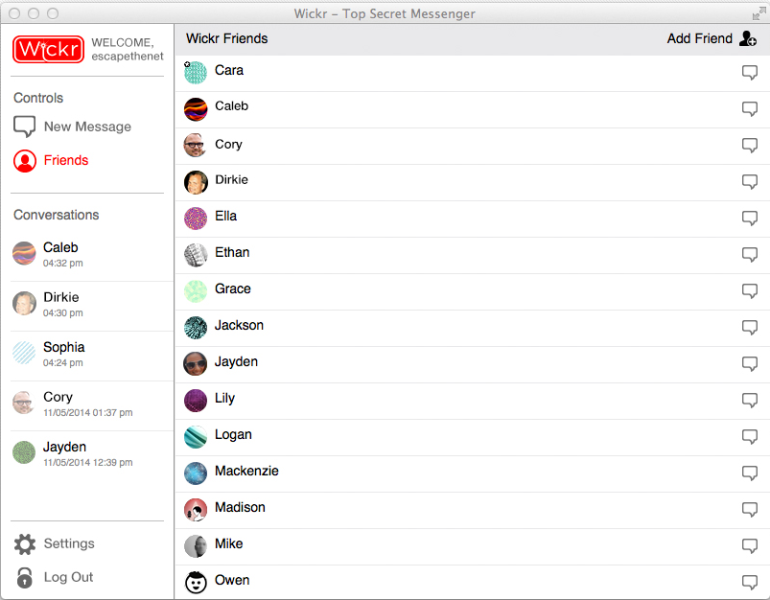 As far as security goes, Wickr has gotten some heavy applause for its technology from the security community. Aspect Security, iSECpartners, and Veracode have all reviewed the code and security of the application. The company doesn’t collect metadata, so in addition to providing encrypted communications for its users, it also ensures that there is no collectible circumstantial data — like who sent the message to whom or geolocation data about messaging participants.

But even with an offering like super-secure cross-platform messaging, Wickr may not be able to take down email. Others have tried and none has succeeded. Google Wave, a media darling, tried to reinvent communication through a chatroom-esque collaborative document interface, only to be shut down in 2012. Most recently, Evernote tried tackling email with a lackluster in-app messaging platform. Let’s not forget Asana, which swears it will revolutionize and ultimately replace email with its enterprise-focused application that ties conversation to tasks. Despite the many “disruptive” technologies battling email, email is still a main mode of communication.

Replacing email is a lofty goal. Though Wickr has a stellar product, one that may even catch on among bankers and businessmen, it will certainly need to make some tweaks to its product before it’s ready to replace email as a communication framework.