Sometimes, a little virtual money can go a long way.

Players of the enduring massively multiplayer online PC role-playing game RuneScape dug deep during November, turning their virtual currency and items into real cash for charity. Developer Jagex converted all virtual items thrown into the “Well of Goodwill” into dollars, turning 512 billion gold into $160,158, split between three charities. With games so often generating negative headlines, it’s a great example of gamers, and a big developer, giving back to the community in a thoughtful way. 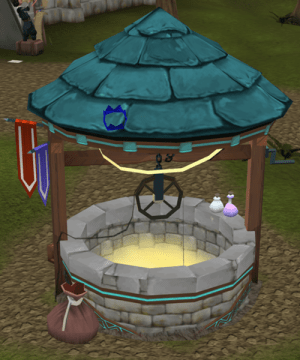 Above: The Well of Goodwill as it appears in RuneScape.

The money raised goes to DonateGames, which supports children suffering from cancer and their families; AbleGamers, a charity that helps people with disabilities access video games; and YoungMinds, a U.K.-based group that promotes and protects good mental health in young people.

Players throwing virtual coins in the well chose how to split their donation, with AbleGamers receiving $49,301, DonateGames getting $50,630, and YoungMinds getting $60,227.

Last year, RuneScape players raised $90,000 in the same way, and the Jagex team thanked the community, via the RuneScape website, for beating that effort so comprehensively in 2014: “This year you’ve completely smashed it. Congratulations, and huge thanks to you all!”

Any RuneScape players still feeling generous through December can donate bonds — in-game items they can purchase and trade — to the character Thorvar Crittersmash near the Lumbridge, Edgeville, Burthorpe or Prifddinas lodestones. Jagex will convert these into a donation to Oxfam, the globally renowned aid and development charity.