Welcome to the first Lara Croft adventure that plays best with a band of buddies.

Developer Crystal Dynamics took the famous adventure/platform series in a new direction in its 2013 Tomb Raider reboot, adding a touch of everything from survival to stealth. In Lara Croft and the Temple of Osiris, a sequel to the digital download Lara Croft and the Guardian of Light, the developer has turned to an arcade-style treatment.

In single-player mode, Temple of Osiris is a solidly executed, temple-based action-adventure offering with arcade, puzzle, and platform elements that could have used a dose of 2013 Tomb Raider creativity. But as a two-to-four person co-op title, it takes off, offering everything from enemies that grow in size and number to coordination of different abilities.

In this installment, the Egyptian god Osiris has been torn apart by the evil god Set, who imprisoned Osiris’ wife Isis and son Horus. Lara and rival treasure hunter Carter Bell inadvertently free the pair and are cursed. Isis and Horus guide Lara in reassembling the pieces of Osiris while defeating Set and his lieutenants. Players can choose any of the four characters (Lara, Isis, Horus, or Bell) in co-op mode.

Lara Croft and the Temple of Osiris launches Dec. 9 for download on PlayStation 4, Xbox One, and PC. A $20 package from publisher Square Enix includes a season pass. I reviewed the Xbox One version. 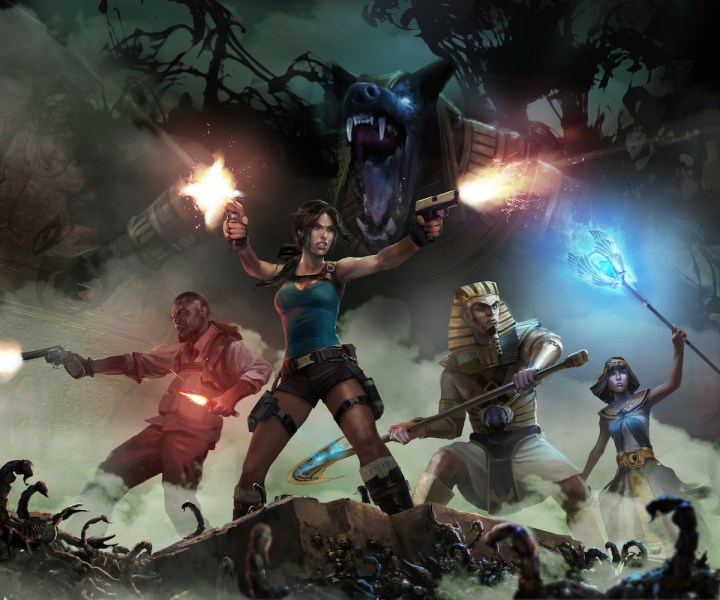 Above: Beautiful even with guns blazing: The new Lara Croft.

Crystal Dynamics has nailed the Lara look, assuming you’re willing to play a version without physics- and gravity-defying cleavage. The athletic Lara from 2013’s Tomb Raider reboot remains, though her stretched tank top is a nod to her more-voluptuous days.

Her movements are graceful, though not always perfectly under control, and her voiceover carries the right combination of refinement and sass. She’s pretty and just a touch rough-and-tumble.

This Lara is a believable, albeit extraordinary, character. I love the fact that the game makes nothing of her gender, despite her role as one of the very first (and still most-famous) female action heroes. She’s just a badass. 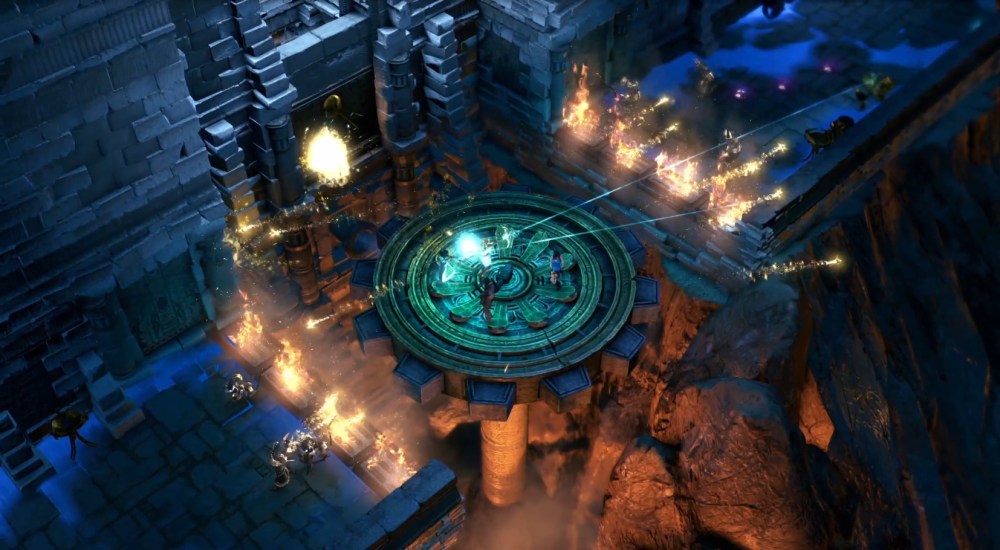 Above: Isis and Horus take aim with staves, while Lara and Carter get busy with guns.

A buffet of death-delivery devices

Lara starts the game with her trademark dual pistols (which remain a solid choice throughout the game) and the staff of Osiris, which can interact with marked objects and also has a nifty laser-beam-style attack.

As you adventure, you’ll add a sizable repertoire of alternate firepower, each with its own distinct feel. The game faithfully reproduces the boom and reload of shotguns, the quick bursts of assault rifles, and the continuous rat-a-tat of submachine guns. None of the weapons are particularly powerful, but they all handle and perform surprisingly differently. 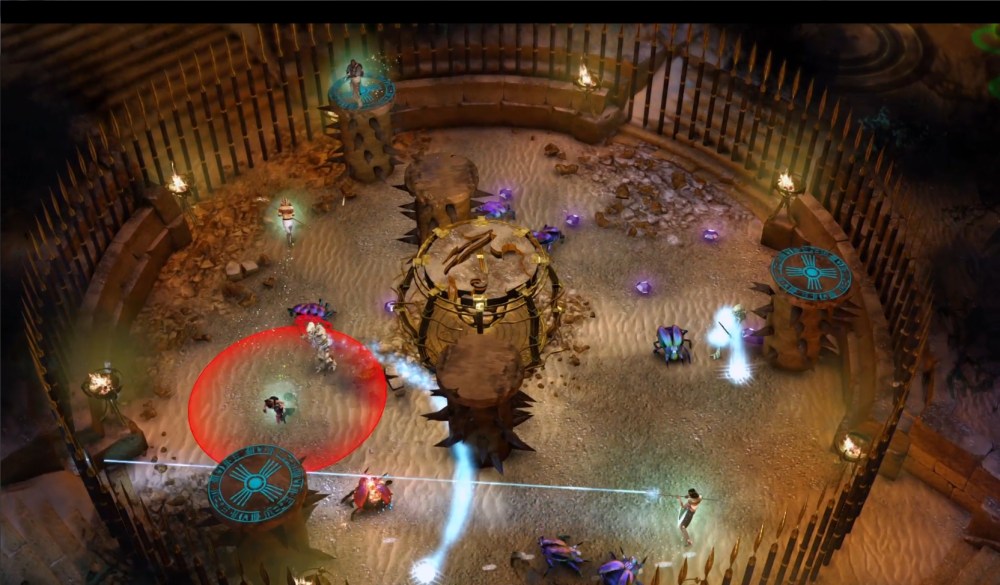 Above: In this level, one player is controlling platforms, another is killing bugs, and a third is dropping bombs to blow up the big skeleton.

Co-op to kill for (and with)

Temple of Osiris supports both couch and online co-op for up to four players. Weapons won’t hurt your fellow players (a blessing when a misplaced staff laser can sweep a room), but bombs you explode will — in the same way they hurt your own character if you get too close.

The game handles co-op in an intelligent way. Enemy number and strength scales depending on how many people are in your party. If Lara would face off against a small pile of flaming scarabs and a giant armored skeleton when solo, she’ll face a horde of scarabs and several skeletons as part of a larger party.

Weapons and abilities are also split between party members. Usually, Lara carries several guns and the staff of Osiris with her when questing. In co-op, Lara will keep her guns, but another party member will get the staff, for example, leading to some fun coordination for the group as the staff wielder raises and lowers platforms or performs other actions in coordination with the team.