At one point midway through the The Talos Principle, you’ll find yourself working on puzzles that involve connecting lasers, moving boxes, and jamming floating mines.

The voice of a woman presumably long gone echoes in your head, musing about whether the continued presence of robots will mean that people will never truly cease to exist.

She’s talking about you.

The Talos Principle’s hugely ambitious aim is to ask you to solve the ultimate puzzles, even as you solve the smaller ones that have been created for you: What is existence? What does it mean to be human, a person? And what exactly happened to human civilization, anyway?

Whether it succeeds depends in large part on how much you like the words the game throws at you by the bucketful. But more on that in a minute.

Publisher Devolver Digital and developer Croteam (makers of the Serious Sam series) will release The Talos Principle Dec. 11 for PC, Mac, and Linux for $40. PlayStation 4 and Android versions are due early in 2015. I reviewed it on PC and Mac. Above: The Talos Principle’s settings are varied and beautiful.

Nagging questions that keep you moving

The Talos Principle’s story starts from the moment the game begins, with an all-powerful voice echoing in the landscape around you. That’s Elohim, and his role as prophet, deity, and jailor, all rolled into one, is the central part of your mission here.

You’re a robot, and digital recreations of human ruins and items from antiquity have been built for you.

Inside them are large-scale puzzles that you move around in, but also spots where you can hear voice recordings from the people that evidently worked on your project. Retro-style computer terminals allow you to read everything from high literature to chat logs to the ravings of madmen.

The questions the story poses are captivating: Who created you and why? Why are you being tested with the puzzles? What happened to all the people? It gives this first-person puzzler a gravitas and a narrative drive that keeps you climbing Elohim’s forbidden tower. 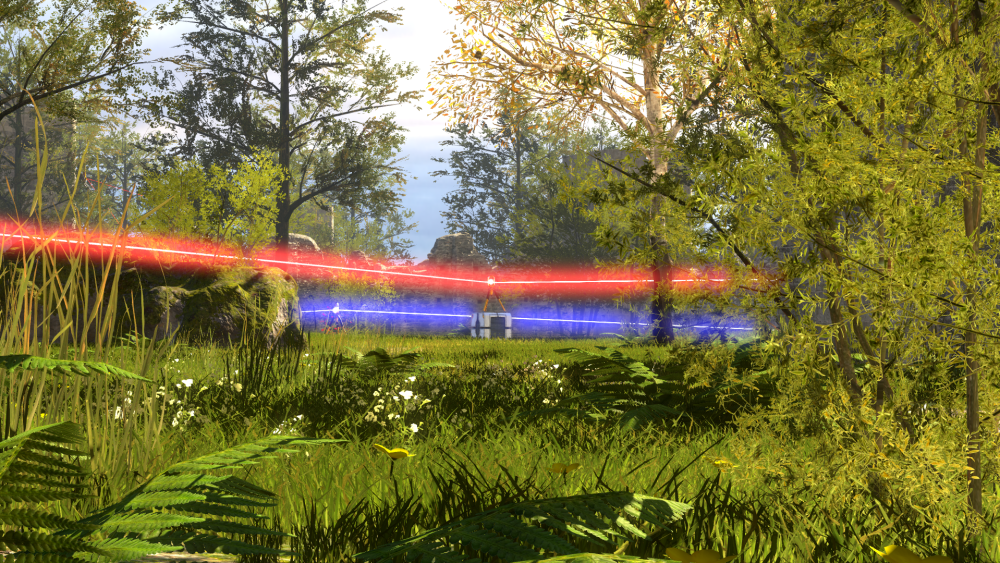 Simple mechanics you’ll use in a wide variety of ways

The Talos Principle’s tools are straightforward: fans, crystals that refract light, jammers that affect electronics, pressure plates, heavy boxes, and the like.

You use them alone and in combination to open gates, disable lethal machinery, and get to Tetris-like puzzle pieces that, when properly combined, open the locked doors of your environment.

It’s a testament to Croteam that these simple elements in combination are able to create puzzles that are sometimes brain-meltingly hard. Most of them are manageable: just difficult enough to make you feel smart, but easy enough to keep you moving forward smoothly.

But if you’re feeling completist, it’s easy to get to the point where even Elohim is suggesting that it’s time to go try something else. And that’s a good thing. Because the game has so many areas to explore at the same time, you can always shift rooms or scenery and attack something else … you just don’t want to.

Above: A demonstration of how Croteam scanned a real historic sculpture and included it in the game.

Talos graphics are about average for a current-gen PC/Mac game, which is to say they’re fairly lovely to look at. Scanned, real-world items appear in the game, and it shows; a patina of realism covers even the deliberately-fake landscapes.

The terrain varies widely as you move through the different rooms and levels. While it all remains relatively flat — a concession I suspect the puzzler’s heavy reliance on ground-based objects demanded — it offers variety.

That’s a good thing, because you’ll rarely see anything or anyone else moving on screen besides the traps you must disarm. When you do, it immediately grabs your shocked attention.

Find the game’s “Messengers” and you’ll start to get tips on completion. And messages posted in the form of QR codes by you and others like you remain on the walls for everyone to see — a reminder that, despite appearances, you are not alone. When the game goes live, some of those messages will be from other players. 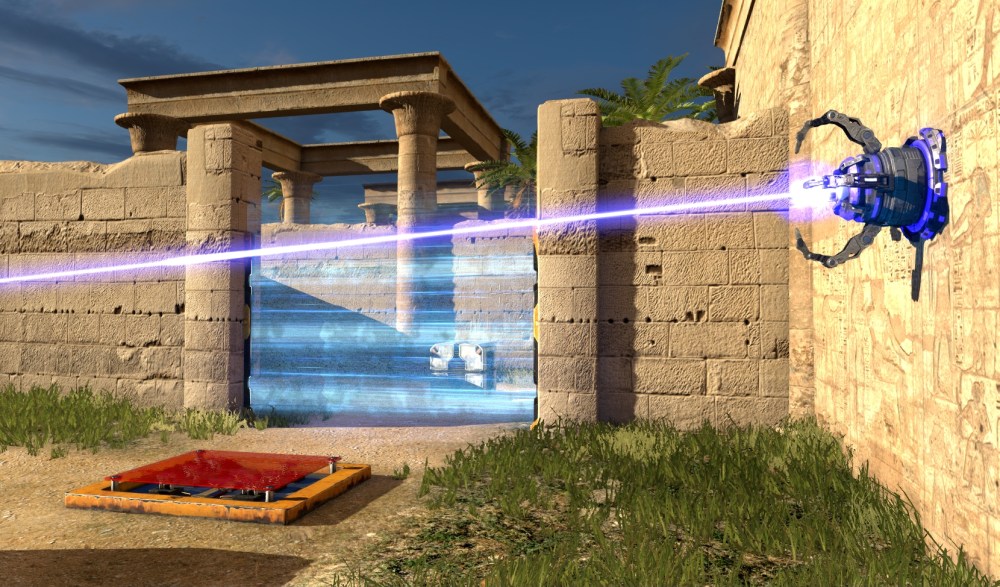 Above: A laser, a box, a force field, and a pressure plate: the ingredients for a long afternoon.

Layers upon layers of puzzly goodness

The Talos Principle can be a big, big game. Croteam estimates 15-20 hours for a single playthrough, but I’ll say now that mine took nearly double that. Definitely tack on more if you like to see alternate endings and additional content.

Developers jammed more than 120 puzzle scenarios, most of which involve multiple rooms, into the game. It got so unwieldy that they had robotic help (ironically) to test it all; for more on that, see our pre-release interview.

The puzzle designs are sometimes incredibly easy, sometimes extremely difficult, and it doesn’t progress linearly. None feel like a cheat once you’ve solved them, however, which is a testament to the game’s design. 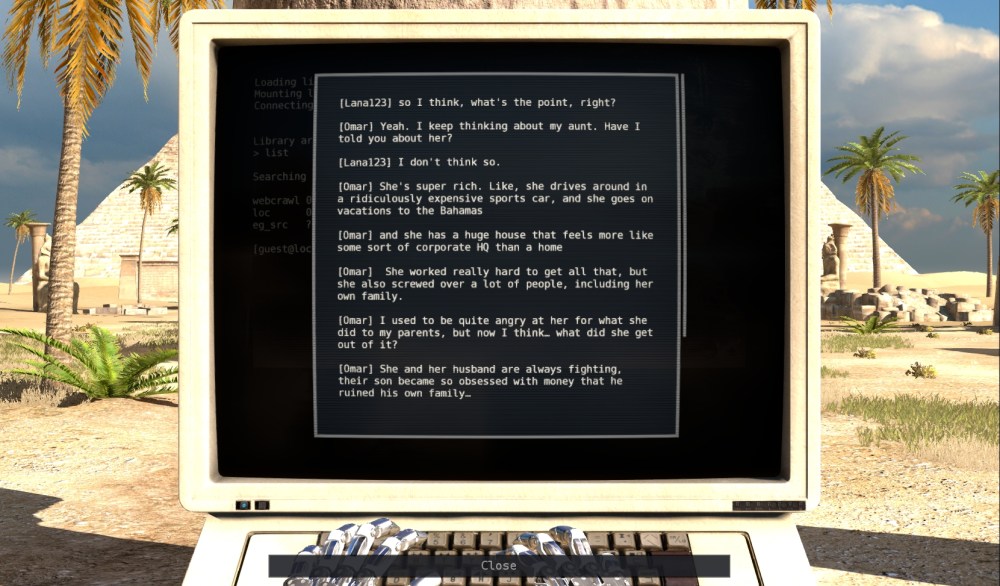 Get set for a pile of reading

As much as The Talos Principle loves its puzzles, it loves its words more. Between the hundreds of files on the computer screens, the spoken excerpts you’ll run into on every level, and Elohim’s rantings, you’re going to feel like you read and heard as much as you moved and played with.

That does slow the pace of the game, and while I’m sure it contributes to the game’s feeling of immersion, I’m not sure quite this much was necessary. It’s possible to play through without reading it, letting the computer terminals cheep sadly at you without interacting with them, and avoiding the shiny cylinders of light that announce yet another monologue. But… but… 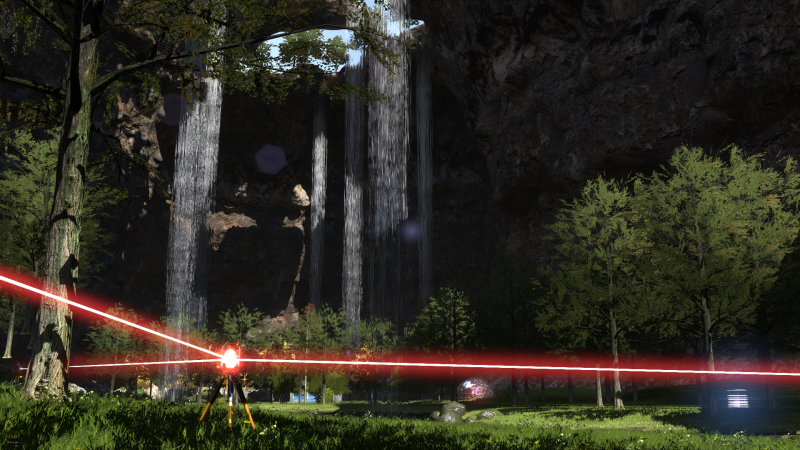 Above: You don’t want wonky sound effects interfering with vistas like this one.

Sound and visual balance that need some tweaks

Midway through the game’s design, Croteam swapped out one Elohim voice actor for another. The new files are apparently quieter than the old ones, because even with voice settings at max and music settings close to minimum, he’s still easy to lose in the ambient soundtrack.

Sound effects could also use some editing. While generally excellent, they’re repetitive in outdoor environments, a little noisy compared with the rest of the soundtrack, and occasionally offputting. Turning around in place has the same heavy-steps sound effect as running forward, for example.

Graphics also occasionally pause and stutter during movement, even on a high-end PC. It’s rare, but distracting. These artifacts should not be confused with the deliberate “glitches” the game includes to remind you that you’re in a digitally-created artificial setting.

These issues are minor, and Croteam has indicated it’s planning to polish graphical issues, at least, up to and past the launch date. 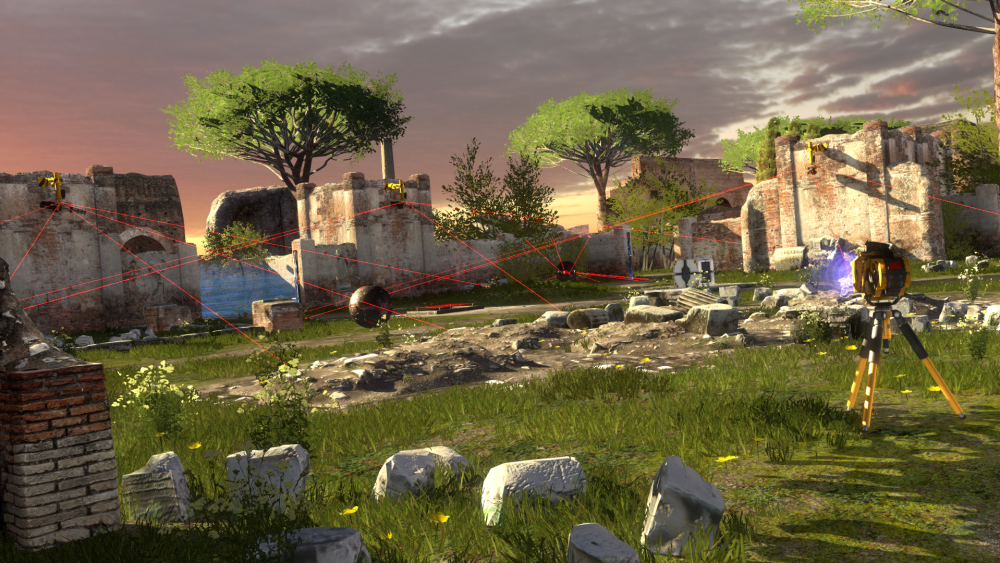 The Talos Principle builds a giant collection of 3D puzzles, puts you in the middle of it, and then gives you a philosophical puzzle to chew on that’s even larger.

You’ve got to be in the mood for Talos. It’s demanding of your time and attention, especially if you’re the type that wants to finish most things you start. And you’ve got to have a love affair with words.

But if that describes you … this game can be magical. The result is a little melancholy, a little melodramatic, but one of the better puzzle game presentations I’ve ever played.

The Talos Principle releases Dec. 11 for PC, Mac, and Linux. GamesBeat was provided with a download code by Devolver Digital for the purpose of this review.