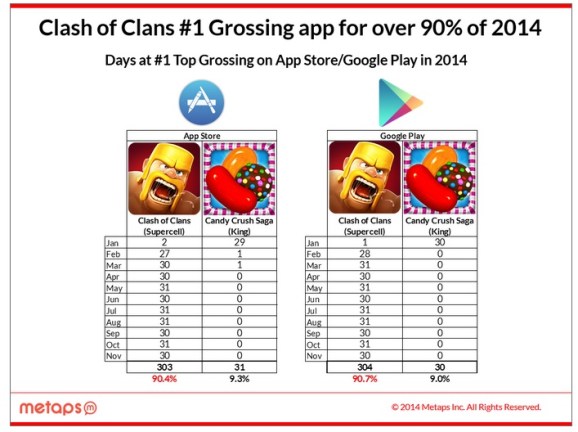 Developer Supercell’s Clash of Clans dominated the mobile-app market in the U.S. for 90 percent of 2014, according to an analysis by market researcher Metaps.

Clash of Clans held the top spot on both the Apple App Store and Google Play for most of the year. Clash of Clans isn’t the most popular game in the world, but players are dedicated and competitive. They spend money in the game to keep up with their comrades in their clans, and the clans compete with each other to be No. 1 on the leaderboards.

But Machine Zone’s Game of War: Fire Age pushed King’s Candy Crush Saga out of the No. 2 position during the month of November. One of the reasons for that was Machine’s Zone’s TV commercial featuring supermodel Kate Upton, an ad that was broadcast heavily on sports broadcasts, late-night talk shows, and during prime-time TV programs.

Candy Crush Saga spent most of the year at No. 2.