Sensors are expected to be a big opportunity for chip makers in 2015, according to an annual survey of chip executives by audit, tax, and advisory firm KPMG. That’s a pretty good sign that the Internet of things, or making everyday objects smarter and connected, is driving the industry’s growth.

The survey of 155 semiconductor industry business leaders showed that sensors, big data applications, and medical equipment will drive revenues in 2015. Longer term, the revenues will come from biometrics, automotive technology, and robotics. The optimism about the Internet of things is no surprise, as chip makers such as Intel have made it a big priority.

The index edged upward to 59 from 57 a year ago. A value above 50 is considered an optimistic outlook on the business environment for the next 12 months, so a higher number means that executives are slightly more optimistic than they were a year ago. The index is based on survey responses to questions on revenue, profitability, workforce, capital spending, and R&D investment. 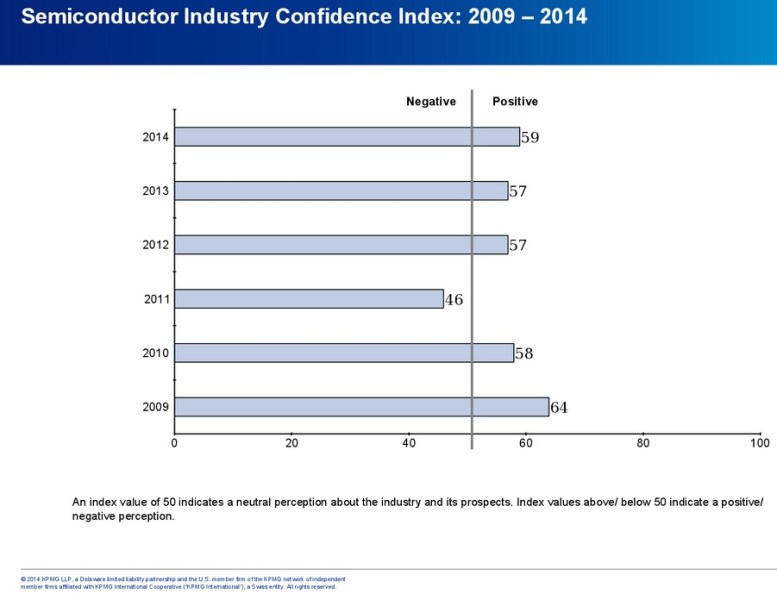 Above: Chip execs are more confident for 2015 sales.

“Last year’s predictions for accelerated growth have largely been fulfilled, but consistently lower revenue guidance for the fourth quarter of 2014 emerged as we were conducting this survey, and that has affected results,” said Gary Matuszak, global chair of KPMG’s Technology, Media, and Telecommunications practice, in a statement. “The lower guidance has clearly held down a more meaningful increase in the 2014 confidence index and lowered growth expectations for 2015.”

“The semiconductor industry faces a myriad of challenges, including accurately forecasting demand, investing in the right new market opportunities, managing the higher development costs of more integrated solutions and navigating increased competition in China,” said Packy Kelly, semiconductor practice leader at KPMG, in a statement. The way to describe the industry is “cautiously optimistic,” he said. “How semiconductor companies address these challenges will help determine whether 2015 is another record year.” 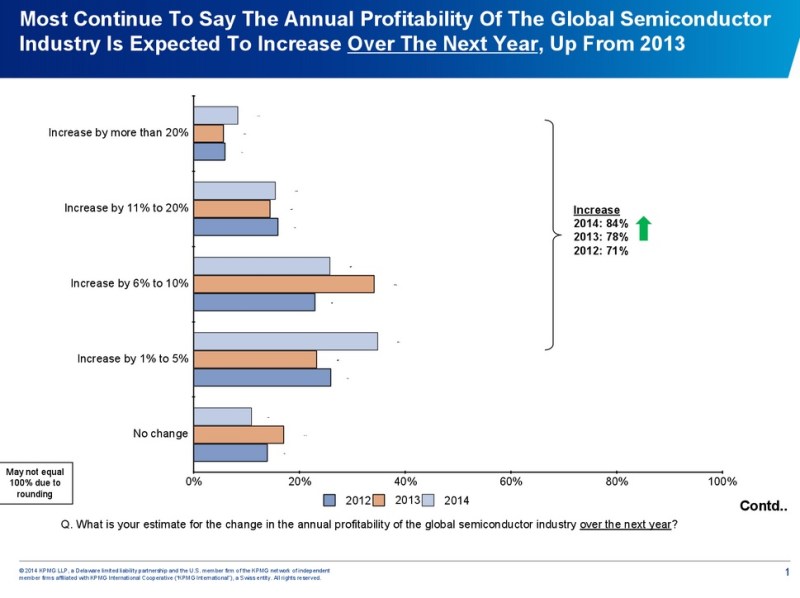 Above: Profit outlook for chips

About 61 percent expect that sensors will be the strongest growth sector in 2015. Such chips are used in automotive technology, video applications, touch screens, wearables, and the Internet of things.

“Competition in the industry has never been more intense as the bar is raised constantly for new product introductions and the time to market for each new design is consistently compressed,” said Kelly.

About 66 percent said that medical will be a big opportunity. And 62 percent said networking and communications will grow the most in 2015. The executives also said cloud, big data, and the wireless/mobile application markets are their company’s most important semiconductor revenue drivers over the next years.

The biggest challenge for the industry is in rising research and development costs, according to 43 percent of the respondents. Another 37 percent cited achieving technology breakthroughs, such as those resulting from Moore’s Law (doubling transistor count every two years), as the biggest issue, and about one-third (32 percent) pointed to the high cost for plants and equipment.

Moore’s Law, the prediction made in 1964 by Intel Chairman Emeritus Gordon Moore, will turn 50 next year. About 26 percent of the semiconductor company business leaders expected the benefits of Moore’s Law to continue for the foreseeable future. But 16 percent said it has already ended, and 58 percent said Moore’s Law will no longer apply at various nodes less than 22 nanometers, where the width between circuits is just 22 billionths of a meter. 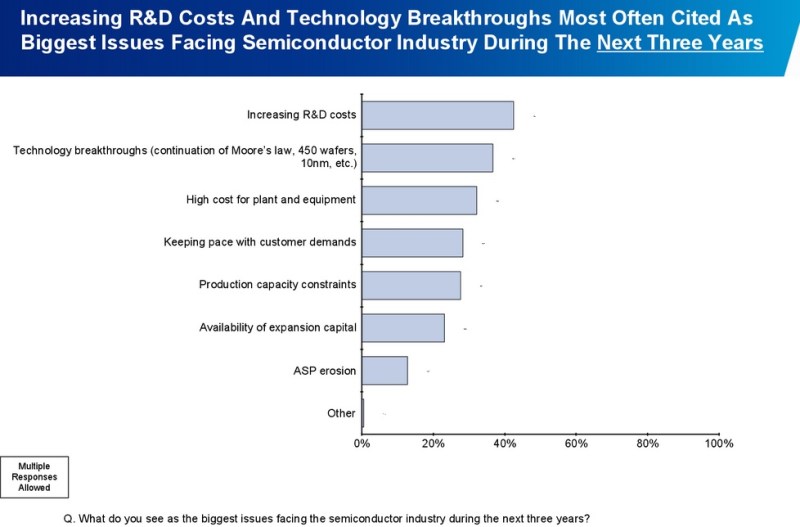 Above: Challenges for the chip industry

The executives said the U.S., China, and India will continue to be the most important markets in 2015 and three years from today. And 83 percent said their chip-related capital spending will increase in 2015. Twenty-two percent expect capital spending to grow more than 10 percent. Just 12 percent predicted that last year.

About 87 percent of the companies surveyed had revenues of $1 billion or more.