This review was written over a couple of weeks of playing Vainglory on an iPad 2.

Super Evil Megacorp’s Vainglory is a fast-and-furious free-to-play mobile game that brings the action of hardcore PC games to the tablet. It is a multiplayer online battle arena (MOBA), the genre that Riot Games’ League of Legends has made so popular. Now you can have some of the same excitement with a somewhat simplified game that works better on iOS tablets or phones.

Apple has been advertising Vainglory as a technological showcase game for its new iPhone 6 device, and that’s smart. Thanks to a proprietary graphics engine, Vainglory stands by itself in its ability to show rich graphics, play in a speedy way, and preserve a good multiplayer connection over Wi-Fi.

If you like MOBAs and don’t mind making trade-offs for the mobility of tablet play, you’ll like Vainglory. It has fewer players, a smaller battle arena, and slower play, and its touchscreen interface isn’t always as precise as you would like it to be. But I’ve enjoyed playing Vainglory over the past couple of weeks because it feels like a real game. I’ll gladly dedicate 20 minutes or 30 minutes for a match because it holds my attention — and because my two other teammates are really counting on me to carry my weight in the 3-on-3 fights. Vainglory is a pitched battle between two teams of heavily armed characters, each protecting their base, or Vain. If you destroy the other team’s base, you win.

I haven’t spent much time with MOBAs, partly because they’re just too fast for me to grasp. But Vainglory has held my attention, and it’s an accessible game that makes it easy for anyone to learn. That’s an important accomplishment, since it could have hundreds of millions of potential players. I’ve played similar entries before, such as Fates Forever and Solstice Arena. But Vainglory is a deeper and more enticing game.

I’ve gone through five levels in rank. My “Karma” level is 5, and I’m paired with similar players when joining a match. If you leave a game early, you lose Karma — and you get more if you finish. That’s a good way for the developers to weed out players who are poor sports and quit games because they’re losing. 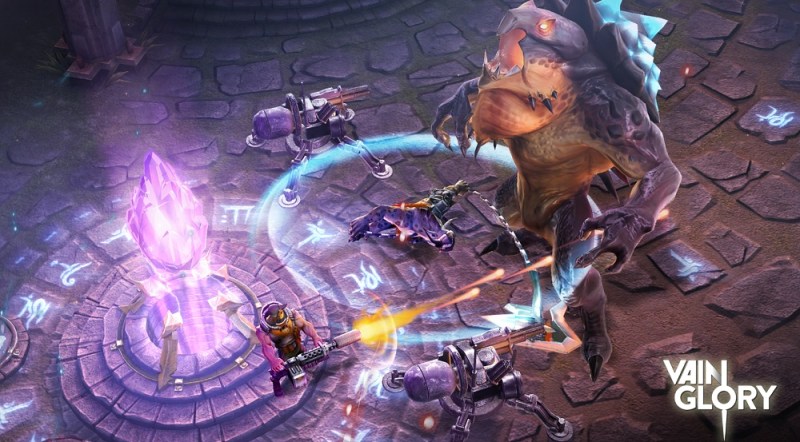 Above: Vainglory’s Kraken is about to attack a base.

The graphics are as good as you’ll see on an iPad or iPhone. The color schemes are also attractive. It isn’t imagery isn’t too cute, nor does it scream hardcore gamer. Super Evil Megacorp spent two-and-a-half years building this game, and it created its own proprietary E.V.I.L. game engine to raise the quality. The result is a gorgeous game.

Vainglory is easy to learn.

You can train, practice, and play on your own in a public match, or you can form a party to play with friends. At its simplest level, Vainglory is a fight between your team of three against another team of three, and your “minions” against their minions. The minions are released periodically down the main “lane” of the game. The lane has turret guns that you or the minions must take out in order to make progress toward the base. If you help the minions, you stand a better chance of taking out the turrets. But the enemy complicates this task.

That’s because you can go below the lane into the Jungle. There, you’ll find gold mines that you can attack. If you take over a gold mine, you’ll win gold that you can use to upgrade your character. You can also gain an accelerated spawning of minions. You can spend a lot of time attacking or defending mines in the Jungle. You can also hide in the tall grass and ambush enemies coming by. And you can unleash a giant creature, known as the Kraken, that will move down the lane and pound away at the enemy’s turrets. Getting the Kraken on your side can be decisive.

But like I said, the gameplay is simple. To attack an enemy, you tap it. To switch your attack, you can tap another enemy. If you kill an enemy, you collect gold that you can use for upgrades.

You can choose among 10 playable characters. Each character has a specialty and is good at attacking a few rivals. But the character also has weaknesses, and it’s vulnerable to attack from others. Take Taka, a ninja character that can disappear. You can counter this by purchasing a consumable “scout trap” that reveals Taka’s presence during a fight. Vainglory has a rock-paper-scissors balance to the heroes, and so it pays to play with different types. I’ve tried characters such as Koshka, Ringo, and Joule. Each has a deadly power that surprises enemies.

I’ve been in a lot of Vainglory’s battles, and it’s never clear who is going to win. If one team appears to be on the defensive in the lane, it may be because they’re trying to unleash the Kraken in the Jungle. In one battle, one of my teammates wanted to surrender early on. But we managed to steal the Kraken just as the enemy was about to unleash it. And that turned the match to our favor. We won. But I’ve also been in a lot of battles where the team that got the Kraken wound up losing.

Some things are predictable. After four minutes, the Minion Mines appear. And after 15 minutes, the Kraken shows up. But the see-saw nature of the combat is a good thing. If you keep pressing your touchscreen like a maniac, you’ll get a payoff.