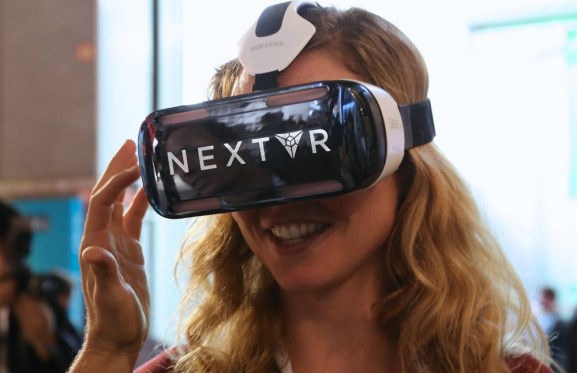 Virtual reality isn’t just about games. NextVR is releasing a Coldplay concert in VR using the Samsung Gear VR gadget to prove that.

Laguna Beach, Calif.-based NextVR has created a way to capture and then deliver live concert performances using special cameras. It can then play back the concert — in this case, Coldplay’s Ghost Stories concert — as a virtual reality experience. It makes you feel like you’re on stage with the band members, according to NextVR. The goal is to make it “better than being there,” the company said.

The entire concert was shot in VR and a clip of the first song, A Sky Full of Stars, will be available via the NextVR app. You can view that app using the Samsung Gear VR headset, which works with a Samsung Galaxy Note 4 smartphone.

NextVR claims the concert film is the first ever broadcast quality VR experience. NextVR has 17 patents granted and pending for the capture, compression, transmission, and display of virtual reality content. The company plans to release additional content in the coming months, such as sitting courtside at a game or in the front row of a major fashion show.

NextVR worked with Coldplay in London over the past summer to develop the VR concert concept as a cutting edge experience for both fans who saw the concert live and wanted to experience it again and those who were unable to attend. NextVR wants to follow up with a rendering of the full concert over the coming months and is in talks with Coldplay for future virtual reality collaborations.

“You’re literally inside the show, front of stage with the band,” said Phil Harvey, creative director of Coldplay. “The quality of this virtual reality experience is far superior to anything else out there. It’s pretty mind-blowing.”

“If you thought going to an IMAX theatre felt like almost being there, you will be floored when you view NextVR’s content. It’s almost better than being there,” said DJ Roller, cofounder of NextVR, in a statement. “There is no comparison for what we’re offering because it hasn’t existed until now. We’ve worked on perfecting the technology for the past five years, and now we’re excited to finally share the result.”

NextVR made the announcement from the UBS Global Media and Communications conference in New York, where NextVR presented on the Future of Virtual Reality panel with the NBA, Formation 8, and AltspaceVR.