MENLO PARK, Calif. — For Facebook’s many advertisers and its 1.3 billion users, there’s a common goal: Delivering relevant marketing in the most efficient manner.

Every month, a billion people use Facebook on mobile devices, 700 million of whom use the social network every day, and many of whom stay logged in simultaneously on both their desktop and mobile devices. That’s a massive advertising opportunity, and the company has been working diligently to muster resources that can help marketers get the most return on their investment possible.

At an AdTech event at its headquarters today, Facebook laid out the recent history of its advertising ecosystem, as well as its vision for how things are likely to progress over the next two years. At its core, Facebook knows its huge user base, and the information the company has about those users and their behaviors, gives it a big advantage in helping marketers find the right way to target their advertising. “That gives us the foundation for what advertisers want,” said Brian Boland, Facebook’s vice president of Ad Tech, “and to get messages in front of people. We’re moving from a mass reach product to a personalized product.”

The stakes are huge for Facebook as it seeks to be the publishing platform of choice for advertisers everywhere. Already, Google’s DoubleClick advertising platform is an industry standard, and Twitter has invested substantial resources in developing advertising products that can boost its revenue. For Facebook, the potential is there to reliably bring in billions of dollars through its ad platform, but if it doesn’t deliver on that promise, businesses will turn to its rivals, taking their ad spend with them.

One of Facebook’s biggest advantages is that its understanding of who its users are allows it to far more accurately target ads than many of its competitors across digital marketing, Boland said. He explained that while general online advertising is just 59 percent accurate in even knowing users’ gender, Facebook tops 90 percent. Similarly, when it comes to age groups, Facebook hits 89 percent accuracy, compared to just 35 percent across the Web.

All of that is at the core of what Facebook calls Custom Audiences, an ad targeting system that helps marketers discover who their audiences are among users of the huge social network, and to do so by uploading information about customers and their purchase decisions, but in a way that protects users’ privacy.

Facebook wants to go further, giving advertisers better tools for how and where to reach those audiences. That’s particularly important, Boland said, because many marketers have lacked confidence that Facebook would work for them in the same way that years of experience has shown that TV is ideal for targeting would-be customers. And without that confidence, advertisers are less likely to invest money in the platform.

With that in mind, Facebook has built three so-called “pillars:” reaching its huge audience, getting them into a “high-impact environment,” and accurate measurement, Boland said. Together, those three pillars should give advertisers the confidence that they’ll get a suitable return on their investment. 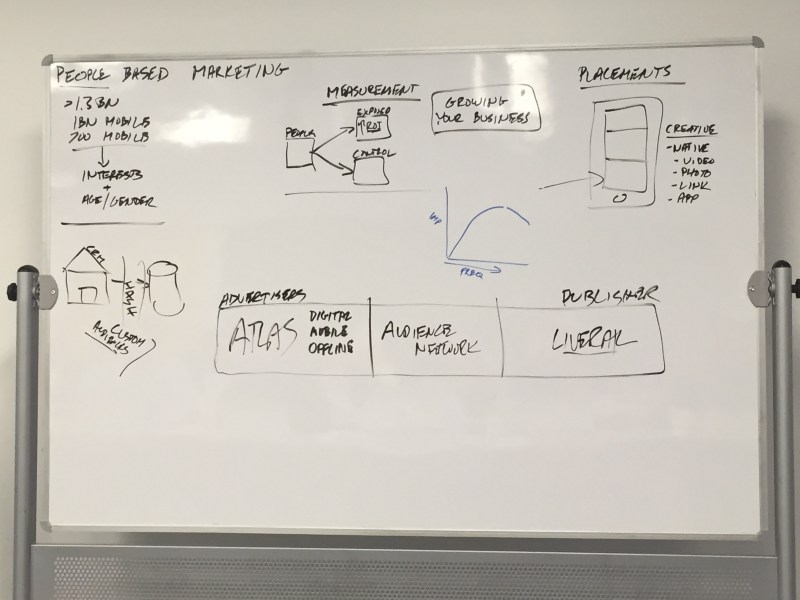 Above: Facebook advertising executives held a “whiteboard” session today to lay out the three so-called “pillars” of the company’s advertising strategy.

One of the biggest problems, Boland continued, is that while marketers “love being able to spend on Facebook,” there was little way for them to compare how their ad spending there compared to the return they got on other digital platforms like Google, Twitter, and so on.

They needed to better understand how Facebook “fit with the rest of their digital mix.”

One substantial issue is that the existing systems made it very difficult for advertisers to even understand that someone logged into Facebook on multiple devices was still only one person.

And that’s what led Facebook to buy Microsoft’s Atlas in 2013, a platform that lets advertisers serve, track, and measure digital ad campaigns, and which generates billions of daily ad impressions across multiple channels. The service launched at the end of October, said Erik Johnson, head of Atlas, which is based not inside Facebook in Silicon Valley, but in Seattle. As Boland put it, integrating Atlas allowed Facebook to understand not just online advertising, but to drill down into mobile, and to tie offline behavior to online.

Even as it was integrating Atlas, Facebook also saw increased interest in serving video ads into users’ News Feeds. As a result, last July it acquired LiveRail, a video advertising company, for a reported $500 million.

As Boland put it, LiveRail provides businesses with a deep toolset for targeting users with relevant video advertising, again with the goal of boosting ROI and giving them the confidence that Facebook is worth their ad dollars.

That was especially true when it came to mobile advertising. With such a huge audience on mobile, and the fact that marketers wanted to be sure they were reaching the specific age and gender groups they want to target with their video campaigns, LiveRail was a way to better efficiency.

All together, then, Facebook’s complete set of advertising tools is meant to provide its business partners with ways to better understand and target marketing messages at users, and to better understand the ways people use Facebook — that even if someone is logged in on multiple devices, they are still one person, and that their needs and interests are the same.

Ultimately, Boland concluded, Facebook knows that the world of advertising is “democratic,” and that “nobody gets to hide in this world, including Facebook.” If Facebook’s systems work for its partners, everyone succeeds. “Facebook is held fully accountable,” he said. “There’s no disproportionate winners…. That’s fundamentally a good thing for the industry.”