Chances are that you haven’t heard about SkyMobi. But the nine-year-old publicly traded Chinese mobile game publisher wants to change that. It’s one of numerous Chinese game companies that wants to become a global game company — and it might have a war chest big enough to make this happen.

Michael Song, the chief executive of SkyMobi, said in an interview at the recent Global Mobile Internet Conference (GMIC) that his company is searching for Western developers who want to publish games in the Chinese market, which has become the biggest in the world. Niko Partners estimated that the Chinese mobile game market will grow 93 percent in 2014 to $2.9 billion. The number of mobile gamers in China is about 450 million, or more than the U.S. population.

Over the past decade, SkyMobi has grown to more than 600 employees. It has hosted more than 15 billion app downloads through its Maopao app platform in China, and it has distributed more than $400 million to its partners. In the most recent quarter, SkyMobi’s revenues grew to $34.4 million, up 81 percent from a year ago.

Song and his executives have toured the globe, from Helsinki to San Francisco, in search of developers. Since the Game Developers Conference in March, SkyMobi has signed six Western games, including  Major Mayhem, Dungeon Quest, and Beach Buggy Racing. The company is also publishing Pele: King of Football, which is coming out at the same time as a movie about the legendary soccer player’s life. SkyMobi is trying to compete in importing, localizing, and distributing foreign games in China. Rivals include Yodo1 and iDreamSky.

Song and others founded the Hangzhou, China-based SkyMobi in 2005. They built a software platform to distribute games through the old feature phones at the time. Close relationships with carriers and device makers were a must in China — it’s the difference between a game thriving or dying. Sequoia Capital invested in 2007, and the company went public in 2010 on the Nasdaq.

But now 80 percent of the business is on smartphones, and it can publish games through a network of more than 100 distribution channels, such as Qihoo 360, Baidu/91, Tencent, Xiaomi, China Unicom, China Mobile, and China Telecom. While all of that is impressive, SkyMobi is not one of China’s biggest game companies.

“SkyMobi has done well serving the smaller tier cities and they have their own platform with preinstalled apps,” said Lisa Cosmas Hanson, the managing partner at Niko Partners, a China-focused market research firm. “I think the key is that they are preinstalled on lower-end Android phones and therefore serve a very different audience than people buying a Samsung Galaxy or Apple iPhone 6.”

Some of the smaller cities may provide more of the explosive growth in China in the next few years, which means the company has a fast-growing niche. 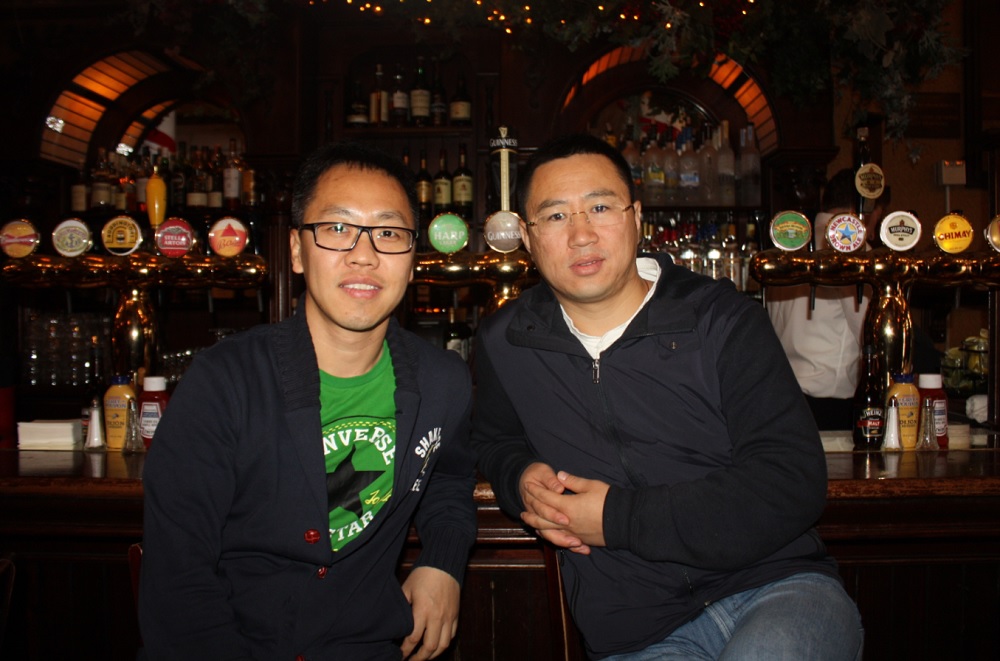 Image Credit: Dean Takahashi
Hundreds of millions of Chinese smartphone users can access SkyMobi’s published games through that network. And SkyMobi can also reach 160 million users through its Maopao app platform. That platform has 33 million monthly active users, and it is growing by 500,000 every day thanks to its partners. SkyMobi also has its own billing software development kit. Through that, it enables developers to collect payments from 70 payment services like Alipay and SMS carrier billing.

SkyMobi tests potential partner games with Maopao users before publishing them. It provides feedback to the developers before distributing the apps through its partner channels. The company has offices in San Francisco, Shanghai, Beijing, and Shenzhen.

Vice president of publishing Gio Zhang said in an interview that in past years, SkyMobi has focused on casual games. Zhang said SkyMobi is now ready to publish more “midcore” games, or those that can appeal to hardcore gamers but often have shorter play sessions.

Song said about 200 employees work on the Maopao platform, and 100 work on internally developed games. Others work on the billing service, publishing, localization, and other functions. The staff of 600 compares to about 400 two years ago. All of these functions are necessary to stay competitive as a publisher and platform owner in China, Zhang said.

“Chinese gamers want more international games, and that is why we are expanding worldwide,” Zhang said. “Chinese developers aren’t always creative enough to the games that the players really want.”

Zhang said that the company is succeeding in signing up mid-sized developers, or those with experience but no gigantic hits yet.

“Big developers are good for us, but it’s hard for us to operate with them,” Zhang said. “We are looking for the middle developers whose games are good enough.”

In two weeks, SkyMobi was able to get 2 million downloads for Adult Swim’s Major Mayhem. That was in the Chinese market alone. Quite often, Zhang said the company’s publishing team has to change foreign games for the Chinese market. Beyond translating them, they have to prepare them for different sales channels, edit the art so it is more acceptable to Chinese gamers, and other changes as well.

With results like that, SkyMobi is trying to beat the other Chinese game companies, Zhang said.

“We generate lots of downloads for our developers, and we’ve been around for a long time,” Zhang said.