Web-based technologies have helped disrupt many industries over the past 20 years, from publishing and movies, to taxis and telecommunications.

But what about long-haul courier services?

While a number of startups have emerged in recent times looking to disrupt the age-old industry of transporting commodities from A to B — Postmates is one example — the business of shifting items across large distances and even overseas has remained largely in the realm of haulage firms.

However, one startup thinks it can tap the spirit of the so-called “sharing economy” and use the power of the crowd to courier items around the globe.

Launching today, Carry is selling itself as an Airbnb of the courier sphere. Travelers simply enter their start point, end point, dates, the size of package they’re willing/able to carry, and how much money they’re willing to carry it for. It’s essentially a peer-to-peer platform that connects shippers with travelers. 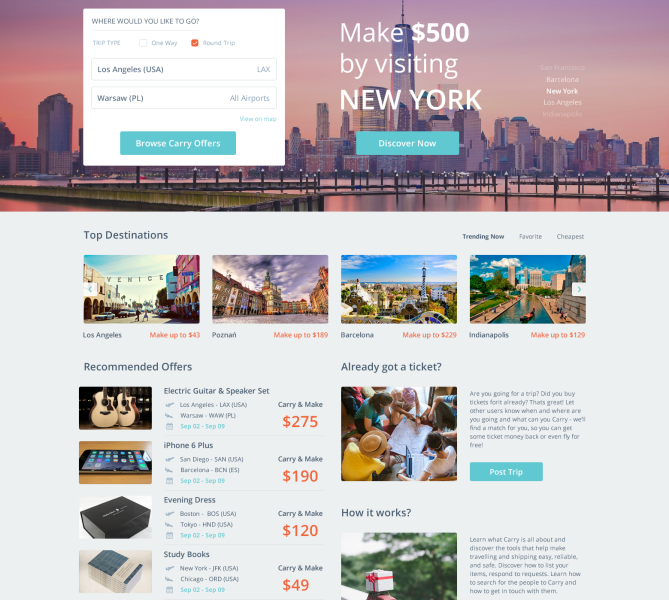 Those who have delivery requirements that roughly fit the designated criteria then liaise with the traveler to arrange collection. 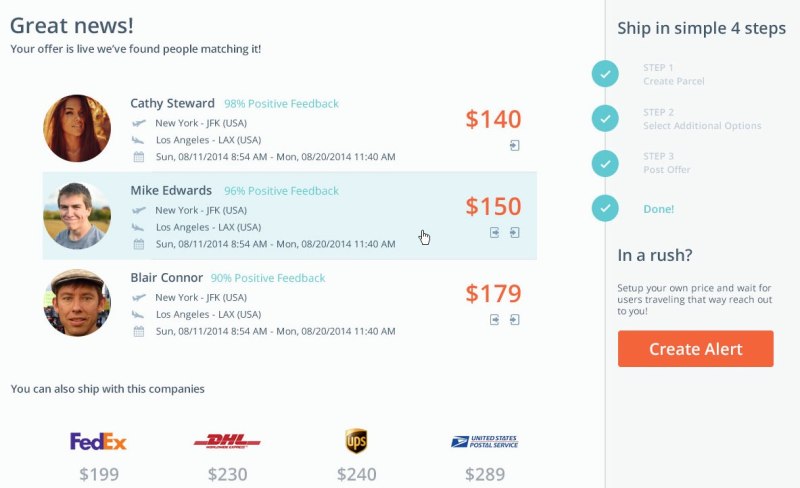 The service works through the Web (including mobile) for now, though native mobile apps are expected to arrive on the scene shortly. And although payments are only accepted in USD, the service itself is available to anyone globally.

There are many advantages to the system. For example, some shipping companies won’t be able to deliver a package to a certain country within a set timeframe, and even if they can, the cost vs. delivery time may render it impractical.

There are obvious problems with this model though. Would you really be willing to claim responsibility for a complete stranger’s goods, carry them through customs, and attempt to take them into another country?

There are many risks attached to this – drugs and bombs to name just two. But cofounder Ilya Rekhter reckons this obstacle is easily circumvented.

“The traveler has the ability to inspect everything they’re carrying before accepting the deal – they can turn away items or people they’re not comfortable with,” he says. “There are several other measures we’ll be using to add confidence too — background checks, 1099 subcontractor status, and so on. But a good rule of thumb is to avoid carrying anything you haven’t inspected or aren’t comfortable checking through TSA.”

That’s fair enough, but it is still easy for those who know what they’re doing to disguise illegal goods as perfectly innocent-looking items. However small the risk may be, it may still be too great for many.

That said, although Carry is being pitched at flyers, it isn’t restricted to air transport. Travelers could potentially use any mode of transport — train, plane or automobile.

Moreover, Carry has shared some interesting numbers from its closed beta phase. The startup estimates that shippers have saved an average of 60 percent on shipping costs, while carriers have earned an average of $500 for each round-trip.

We’re told that Carry is currently in the process of raising capital to build out the company, and the founding team has impressive credentials.

Based out of Indianapolis and San Francisco, the startup was formed by Ilya Rekhter, Peter SerVaas, and Eric Jiang, the latter previously worked as an engineer at Google. The trio also cofounded a multimillion dollar business called DoubleMap, which provides transportation software to a number of big companies.

Carry is live for everyone around the world now.