Image-sharing site Imgur has big plans for advertising as it heads into next year, and those plans begin with the hiring of the company’s first major ad executive.

The company has hired Steve Patrizi as its new vice president of marketing development, it announced today. The move undoubtedly came about thanks to the $40 million funding Imgur picked up back in April. While Imgur’s current advertising strategy is fairly basic, the site has a ton of traction, including 150 million monthly active users and 60 billion page views every month.

Translating that traffic into advertising revenue might seem a bit intimidating, but it’s not the first time Patrizi has accepted such a challenge. He previously spent time as the head of partner marketing for Pinterest, where he led the social startup’s first attempt to generate revenue from native ads. Before that, Patrizi helped launch LinkedIn’s marketing solutions platform and logged time running advertising for Microsoft and the Wall Street Journal. 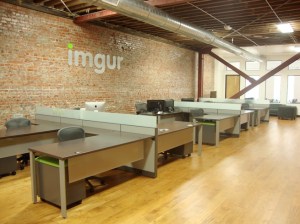 Above: Imgur’s office in San Francisco.

“Imgur has evolved from a hosting service to becoming a form of image-based journalism … because people are telling stories,” Patrizi told VentureBeat in an interview.

“We think there’s an opportunity for advertisers to reach this audience with similar long-form messaging that tells a story,” he said.

Patrizi said Imgur has already seen some success in making direct ad deals with major brands, even though the company was just testing the waters. He sees Imgur increasingly becoming more of a destination site rather than the image hosting service people use when sharing content on other social networks like Facebook, Twitter, and of course Reddit.

Personally, I’ve started to notice lots of Reddit submissions that credit an Imgur user (for discovering the photo, gif, or meme image) within the headline. And Imgur itself has spent the last two years enhancing the service to grow its own active community of self-dubbed “Imgurians,” launching things like a meme generator iOS app, a revised Imgur Gallery (aka, its version of a Reddit “front page”), and an overhauled viral image search tool. It has even updated its much-beloved gif image format.

“What we think the biggest opportunity for advertisers is on the site itself … not necessarily in how many people visit Imgur coming from other places,” Patrizi said, adding that all the adjustments made to Imgur over the last year are just the beginning of the company’s strategy to lure more people to stick around. “Those that navigate to the home page don’t spend a ton of time there, and there wasn’t a lot marketers could do with that experience. But we know that the real value of Imgur is once people do find something interesting, they go deeper and keep clicking and clicking. There’s this addictive quality [Imgur has] where you keep hitting the next button.”

One example of this is Imgur’s sidebar for submissions that originally gained traction on Reddit, and shows additional popular images submitted within a particular Reddit category (called subreddits). And lately, the comment section has become far more active and worth consulting, with many of those comment threads featuring their own sets of images.

Patrizi said Imgur plans to kick off its advertising game plan by bringing on 10-12 advertising partners to beta test its new ad products during the first half of 2015.

At the start, the company is putting posts from brands in front to users to see how they react. The company is less focused for now on proving the value to advertisers, he said.

“We’ll get to that, but right now it’s about how Imgurians react,” Patrizi said. “And if we do that and deliver relevant content they like, we’ll be rewarded with a vote and return that value.”