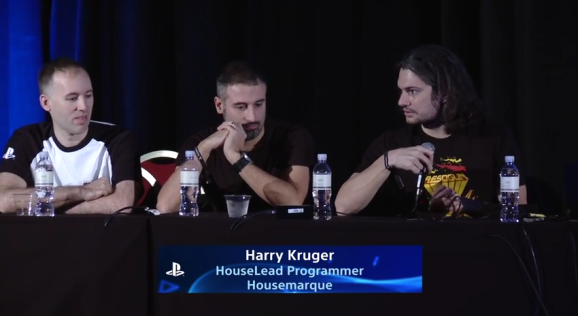 Massimo Guarini and Harry Kruger on the "Generation 8 -- A New Golden Age!" panel at PlayStation Experience.

It’s an exciting time for gamers, but not everyone agrees that we’re witnessing a new Golden Age, or period of great achievement, for the hobby.

Sony hosted a panel at last weekend’s PlayStation Experience event called “[Console] Generation 8 — A New Golden Age!” And while most developers on the panel agreed with the premise, Harry Kruger, the lead programmer on acclaimed PlayStation 4 shooter Resogun, stood apart. Kruger explained that we shouldn’t judge the current console generation as golden until it has the games to match.

“In my opinion, I think it’s a bit too hasty or too early to define this as a Golden Age,” he said, “because we, as developers, need to make sure that that happens.”

Kruger said that the term Golden Age carries a retrospective connotation for him, and we should apply it by looking at the games in previous generations “that have stood the test of time and have defined each generation as being golden in some way.”

Massimo Guarini, the creative director at Italian studio Ovosonico and previously director on horror title Shadows of the Damned, had just explained that he considers the current console generation as a Golden Age.

Guarini highlighted a number of factors to back his opinion: “I think it’s the first time we’re witnessing a generational shift. It’s the first time we’ve had 40-year-old players, and it’s the first time we’re witnessing 50- or even 60-year-old video game creators, and that’s bringing to the table lots of new things. To me, that’s also one of the reasons why … this one is one of the most exciting Golden Ages ever because of low technological barriers, high quality, and level of the tools available, and especially because of the diversity of the audience and the new content that’s been created.”

Kruger jumped in at that point to state his case. “This might be just arguing semantics, of course, but I might disagree a little bit there with your definition of what a Golden Age is,” he told Guarini.

“In the end, it’s all about the games. There’s possibilities, there’s potential, but above all, it’s the realized potential that stands the test of time.”

You can watch the full, hour-long discussion below.