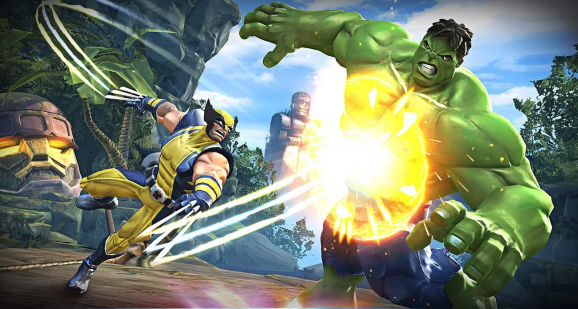 Force Marvel's litany of costumed heroes to become your puppet gladiators in Contest of Champions.

Success on mobile is a whole lot easier if you have a brand that everyone recognizes.

Developer Kabam launched Marvel: Contest of Champions on iOS, Android, and the Web today. The free-to-play app has gamers collecting superheroes and villains from the Marvel universe to compete in fights as part of a galaxy-wide contest. This is the latest game from Kabam, which has established itself as one of the top developers on social and mobile platforms thanks to games like The Hobbit: Kingdoms of Middle-earth and Fast & Furious 6: The Game.

Marvel and Kabam are hoping to attract a wide audience to this game to get them spending money on in-app purchases. The game features microtransactions ranging from $2 to $100 that players can use to upgrade and unlock new and rarer fighters.

After finding success with those other licenses, Kabam is now planning to do the same thing with Marvel’s superheroes. To help the game please core Marvel fans, Kabam even brought in author Sam Humphries, who writes The Legendary Star-Lord, to pen the narrative of this game.

“Marvel: Contest of Champions stays true to classic Marvel storytelling with big threats, heroic moments, and shocking revelations wrapped into a game that is not only easy to pick up and play but is also fun,” Marvel: Contest of Champions creative director Cuz Parry said in a statement. “The development team is a huge fan of Marvel, and we’re proud to deliver an epic game that we know fans will be psyched to play.”

The story has regular Marvel baddies like Kang the Conqueror, Thanos, and The Collector trying to outwit one another and using the heroes of the Marvel universe as pawns in their contest.

“It was awesome working with Kabam to develop a unique storyline for a video game that stays true to the Marvel Universe,” said Humphries. “Watching the heroes and villains come to life as playable characters on my phone is beyond epic.”

While Kabam is focusing a lot on the collection aspect of Contest of Champions, the action portion is a fighter that is similar to Warner Bros. Interactive Entertainment’s Injustice: Gods Among Us superhero brawler.

“We could not be more excited about Marvel: Contest of Champions,” Marvel Entertainment vice president of games Jay Ong said. “The team at Kabam has done an amazing job of translating the heroic combat and dynamic visuals that Marvel fans know and love into an action-packed gameplay experience for mobile devices.”