Trading stocks on your iPhone without spending a fortune is finally here.

And by that, we mean that Robinhood’s long-awaited app is finally available after about six months of beta testing, one-and-a-half years after the company was founded.

Robinhood’s founders, Vlad Tenev and Baiju Bhatt, two young men with backgrounds in finance, set out to build a mobile-only solutions for stock trading. Along with eliminating long phone calls to stock brokers, Robinhood also eliminates trading fees, an old staple of the brokerage world. Instead, its revenue will come from margin lending (loans to users to buy stocks) and other brokerage services.

Today, the app is available in the Apple App Store, with Android on the map for next year.

As anticipated, Robinhood’s app is minimalist, with a black or white background, and a flat UI.

For security reasons, you have to unlock the app using your iPhone’s Touch ID fingerprint scanner or a password.

You can hook up your bank account through your bank’s authorization. Robinhood currently supports several major banks and claims 90 percent of users already bank at one of them. It’s going to add even more in the future.

Inside the app, a simple and clean dashboard lets you track stocks, both ones you own and ones you’d like to track.

Purchasing or selling stock is simple. Just select or search for any U.S.-based stock or exchange-traded fund, pick the number of shares, review, and confirm your transaction. 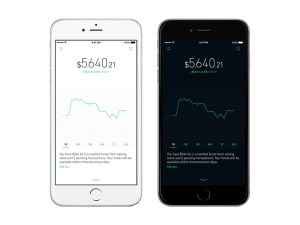 It’s for the millennials

It’s no secret that Robinhood is geared towards the young folks.

“If you look at all the stuff that other brokerages offer, there aren’t any brokerages that live on the phone,” Bhatt said.

About 80 percent of Robinhood’s beta testers are 18-29 years old, with an average age of 26, the company said.  “We think that for people our age group, investing in tech companies is a great way to do it,” said Tenev.

The service’s lack of account minimums and trading fees will also appeal to young people with less cash.

But young adults are also disadvantaged when it comes to trading because they’re less likely to have experience with the stock market. In fact, about half of Robinhood’s beta testers made their first stock trade ever with the app, the founders said.

Nevertheless, the duo has decided to keep its product relatively free from content, only providing each stock’s very basic profile, forcing users to seek knowledge and information from the outside.

Eventually, however, Robinhood plans to build a sort of “quantified self” tracking for its users. This feature will take into account stocks’ behavior on an aggregate level and over time and will guide users as they trade. For example, if a user’s stock starts to dip, Robinhood could users them know that, historically, it has bounced back up within a day or two, so they should be patient instead of selling.

Some of Robinhood’s other plans including making it to Android and the Apple Watch in the next six months, announcing its beta API partners, and onboarding its 500,000 waitlisted users at the ambitious goal rate of 10,000 per day.

Robinhood was founded in 2012 by Tenev and Bhatt and is based Palo Alto, Calif. The company has raised $16 million to date.