Most reveal trailers want to blow you away with how awesome a new game is going to be. Street Fighter V wants to put its hands around you. It’s OK — it’s not for a Spinning Pile Driver. It wants to give you a hug.

The fifth installment of Capcom’s fighting-game franchise for the PlayStation 4 and PC launched with a sentimentality usually reserved for retiring baseball players. You are not a ruthless warrior destroying a legion of weaklings. You are a real-life person who has found a venue for self-expression through Street Fighter, whether it’s in competition, art, or fandom. You are part of a community, and the developer is betting that it will drive fans to the next generation of battle.

David “UltraDavid” Graham is a stream commentator at tournaments across the country where top players and genre fans converge. He said that the release trailer shows how Capcom has changed. Aside from throwing release tournaments when new games came out, the company’s past engagement with the community was minimal. Graham said its embrace of the Street Fighter scene shows that it recognizes a dedicated group that will both buy fighting games and advertise them through exciting matches.

“I love also that the trailer makes a strong connection between trying to get good at other activities and games,” Graham said, “as if to say that they know fighting games can be the same way. I hope that this signifies another switch in mindset toward emphasizing getting more players more interested in the competitive side.” 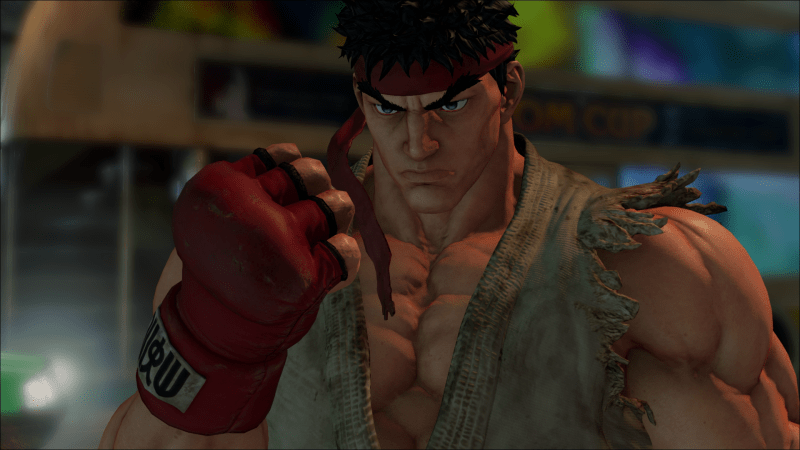 Above: Either Street Fighter V is going for a darker atmosphere, or it's been awhile since Ryu washed his gi.

Fighting-game tournaments have grassroots origins that they strive to preserve and don’t reach the viewership levels of e-sports like League of Legends or StarCraft. Still, interest is rising steadily as 149,000 concurrent viewers tuned in to witness fan-favorite Justin Wong finally win the Ultimate Marvel vs. Capcom 3 championship at Evo 2014, fighting games’ premier event. Meanwhile, Capcom invested more into the community by sponsoring tournaments and developing a Pro Tour in collaboration with Twitch.

On Saturday, the publisher hosts its second-annual Capcom Cup at San Francisco’s Warfield theater, featuring 16 Ultra Street Fighter IV players who qualified at events from around the world. For the past few weeks, Graham and his regular commentating partner, James Chen, presided over the World Warriors of Capcom Cup series of analysis videos to spotlight each competitor to give viewers a greater understanding of Wong’s patient Rufus or Darryl “Snake Eyez” Lewis’s ridiculous Zangief punishes.

“Our intended audience is people who already have some interest in fighting games but might not know everything about Ultra Street Fighter IV or these particular players,” Graham said. “Even James and I didn’t know a lot about some of the players before this!”

While the videos don’t target brand-new fans, the team does also stream shows like First Attack! for the absolute beginner.

Sony may have also had an eye on the competitive scene when it secured console exclusivity for Street Fighter V. The PlayStation 3 was never lacking for fighters, but the audience for Capcom games was split between it, Microsoft’s Xbox 360, and the PC. Despite this, Sony worked with the company to attain additional features for 2012’s Street Fighter X Tekken such as five additional characters and compatibility with the PS Vita. Now the PS4 has a franchise with the name recognition to lure fans to the console in the way that series like Final Fantasy and Metal Gear Solid did in the past.

While the Capcom Cup will also reveal more information about Street Fighter V’s gameplay, it’s too early to tell whether the PS4 or PC will become the standard for these events. In the past, high-level players preferred the Xbox 360 for the developer’s games due to input lag issues in the PS3 version. Recently, organizer Level|Up Productions used the PC version for its weekly tournament series through a sponsorship with hardware developer Alienware, noting “an opportunity to grow by competing on a platform that’s accessible and predominately used in championship gaming events world wide.” And with cross-platform play between the platforms, online warriors would have access to the same field of opponents.

Graham said that the chances that the PC could become the preferred platform for competitive play were minimal. Relatively few in the scene have access to good rigs compared to other communities, and the consistency that is key for tournament play is difficult to maintain when computers have different specifications.

“But if Capcom designs SF5 to play natively on PC, maybe they can fix that,” Graham said. “Personally I would love that, I’d much rather buy a new computer than a new console!”

While promoting the community is great, both companies are in financial situations where they need to deliver. Capcom reported declining sales for two straight quarters, and the PlayStation 4 is a bright spot in Sony’s otherwise difficult portfolio. And despite the added features for Street Fighter X Tekken, it became an example of how bad downloadable content practices and game-breaking bugs can incite a fan backlash.

Fighting games need a rich player base to survive, and Street Fighter V’s success will depend on the will of the people.