2014 was a huge year for energy. Solar surged forward, China and the U.S. got serious about climate change, and new tech continued to reshape our relationship with the power grid.

In case you missed the big stories, here are 8 statistics that capture the year’s most important energy trends.

Coal is America’s largest source of electricity, but its dominance is waning. There were five new coal power plants built in 2012, two in 2013, and just one in 2014 — Spiritwood Station in North Dakota, which produces a modest 62 megawatts of capacity at peak.

As coal’s fortunes fade, renewable energy’s are rising. Solar became cost-competitive for utilities this year, and the price of wind power hit an all-time low. Energy companies plugged 3,281 megawatts of new wind, hydro, biomass, and solar power into the grid between January and September — a full 53x what Spiritwood Station generates.

Many aspects of Apple’s iPhone 6 are indeed, as the company has stated, “bigger than bigger” — from screen size to sales numbers. But at least one thing about the phone is spectacularly small: its energy consumption.

In September, a study by Opower revealed that charging the iPhone 6 costs just $0.47 a year. Fueling a 6 Plus model will run you only a nickel more than that. In a whole-home context, charging these devices (and comparable phones) represents around 0.04% of the average U.S. home’s electric bill. 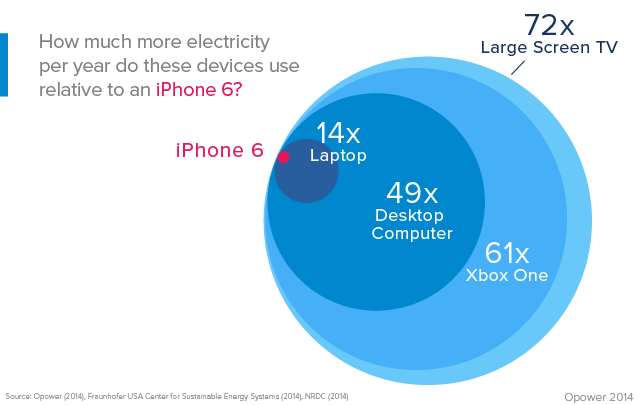 This year, the combined global land/ocean average surface temperature has exceeded the 20th-century average by 1.22°F (0.68°C). Meteorologists expect that 2014 will surpass 2010 as the warmest year since record-keeping began in 1880.

By the end of 2014, 14 of the 15 warmest years on record will have occurred in the 21st century, coinciding with a sustained increase in atmospheric greenhouse gas concentrations. The earth has now undergone 38 consecutive years in which the annual average global temperature is anomalously high. 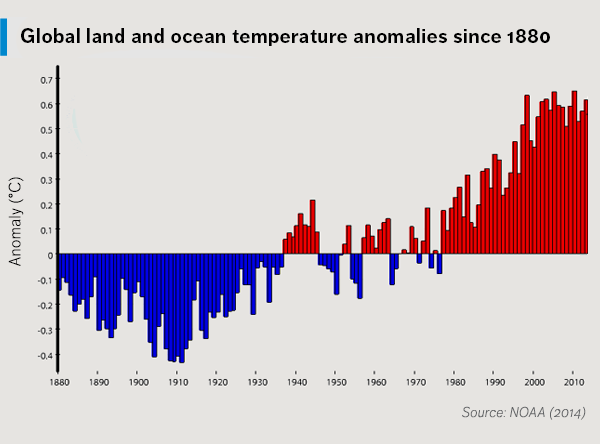 The United States and China surprised the world this November when they announced a dramatic joint commitment to cutting carbon pollution. The bilateral climate agreement stipulates that America will emit 26 to 28 percent less carbon in 2025 than it did in 2005. In return, China will cap its greenhouse gas emissions no later than 2030 — and build enough solar, wind, and nuclear capacity to rival the entire U.S. fleet of power plants.

Perhaps most significant of all: by committing the world’s two largest carbon polluters to action, the U.S.-China partnership sets the stage for a global climate pact at the upcoming U.N. Climate Change Conference in 2015.

Electric utilities’ top priority is making sure there’s exactly enough power in the grid to meet demand. They can adjust supply by taking power plants on- or offline, and they can influence demand with efficiency programs that help homes and businesses moderate their energy use.

This year, new research exposed a dramatic price differential between those two options. Scientists at the Lawrence Berkeley National Laboratory reported (.pdf) that it costs utilities just 2.1 cents in total to reduce energy demand by 1 kilowatt hour — which is less than half the cost (.pdf) of producing the same amount of electricity at a typical power plant. As utilities across the U.S. retire their older, more polluting power plants, many will adopt energy efficiency programs as the cheapest — and cleanest — option available. 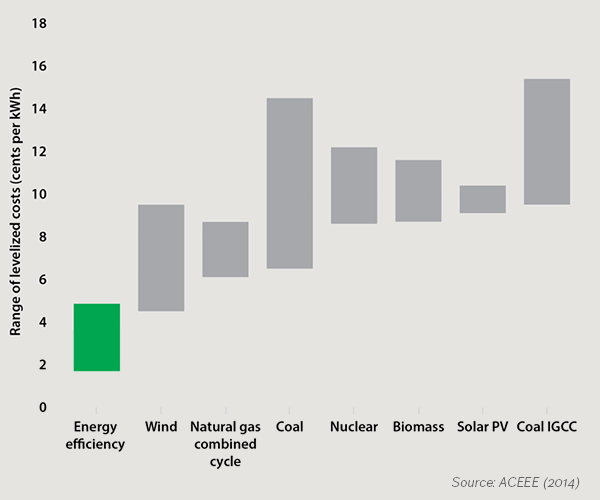 The electric vehicle market is about to get turbocharged. Just two months after Tesla CEO Elon Musk released his company’s patents to catalyze the growth of the broader electric car industry, the company announced in September that it would construct a 5-to-10 million square-foot “gigafactory” in Nevada to pump out lithium-ion car batteries at scale. Tesla projects that it will produce enough battery packs by 2020 to power 500,000 new Tesla vehicles every year.

Today, only around 1 in every 140 new cars sold in the US is fully electric, but the ambition and scale of the gigafactory could leave that ratio in the dust. If it does, the impact on utilities and the power grid will be significant. Opower’s July 2014 analysis of more than a million households revealed that homes with electric cars use 4x more power than average during certain hours of the day.

A new solar project is installed in America every 3.2 minutes. Just as remarkable: almost every single one is misaligned with the needs of the electric grid.

This year, however, saw an increasing number of energy thinkers pivoting toward the western sky. That’s because west-facing systems, unlike south-facing systems, are best at generating power in the late afternoon — when the grid can benefit the most from the extra juice. Only around 1 in 10 solar rooftops point west today, but a sufficiently large westward shift could make solar energy an essential asset in helping utilities meet peak electric demand. 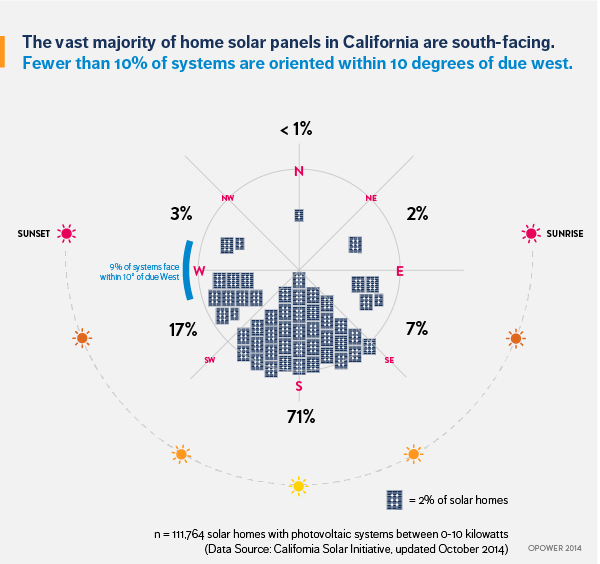 This year’s Nobel Prize in Physics went to three Japanese scientists who built the first blue light-emitting diode (LED). Their technology paved the way for the white LED bulbs you can buy at the store today, which are 19x more efficient than conventional incandescent light bulbs and can last 50-100x longer (.pdf).

There are two big reasons that white LEDs are a transformative innovation. First, a full fifth of the world’s electricity use goes toward lighting; more efficient bulbs represent an opportunity to dramatically cut global energy consumption. Second, there are 1.5 billion people who aren’t connected to the power grid. LEDs use so little energy that you can run them off cheap, local solar panels — which means there’s finally technology in place to light every home on Earth.

Barry Fischer, Aaron Tinjum, and Casey Davis-Van Atta are writers at Opower, a company that provides software solutions to the global utility industry. Their data-driven analyses and commentary on energy, technology, and innovation have been featured by The New York Times, Bloomberg, The Washington Post, Scientific American, and The Economist. You can follow work by each of them on the Opower Blog.