A startup that styles itself as an “Uber for roadside assistance” says it has been on the receiving end of some Uber-like dirty tricks by AAA.

For decades, the American Automobile Association has been the monster truck in the roadside assistance arena. But with the launch of its service last month, Honk is hoping to disrupt the industry by offering quick, flat-rate, app-based service. AAA, which Honk says is costly and out-of-touch with millennials, is squarely in its crosshairs.

Now Honk is charging that AAA has been interfering with business by directing its own employees to call for, and then cancel, substantial numbers of Honk tows. The practice has been “systematic” and nationwide, Honk CEO Corey Brundage told VentureBeat Thursday.

To anyone following the recent scuffles between Uber and Lyft, competing rideshare companies fighting an increasingly bitter battle for customers, Honk’s allegations will sound familiar. Last April, Uber was accused of directing its employees to order and then cancel thousands of Lyft rides in a bid to wreak havoc with its competitor. Uber subsequently leveled the same accusation at Lyft.

Honk launched last month, aiming to out-AAA AAA. Already it has contracts with more than 20,000 tow truck operators around the country, requires no membership, and promises service within 30 minutes. The Santa Monica, California-based startup hoped to attract a young customer base that is conditioned to ordering just about anything through a mobile app and that it thinks doesn’t want to commit to annual fees.

AAA takes off the gloves

Honk’s initial publicity outreach may have piqued some at AAA, prompting the giant Heathrow, Fla., company to take action. A November 19 USA Today article about Honk’s launch quoted Brundage as saying AAA “doesn’t have the brand affinity with this generation. … The younger millennials don’t want to pay for services they don’t use, for a service that might happen every 3 or 4 years.”

AAA charges between $57 and $119 a year for membership, which offers up to four no-additional-cost tows a year as well as other services such as jumps, free maps, and travel assistance. 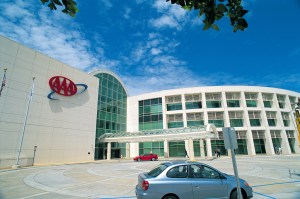 Above: AAA headquarters, in Heathrow, Fla.

AAA clearly took umbrage to its characterization in news stories about Honk’s launch. In a November 25 cease and desist letter written to Honk, which VentureBeat has seen, AAA demanded that Honk immediately stop making “false and misleading statements,” in particular that AAA often charges more than $100 a year for membership, that it takes at least 45 minutes to respond to service calls, and that “AAA does not have affinity with the millennial generation.”

Brundage said that AAA’s attempts to interfere with Honk’s business didn’t stop there. Last week, he said in a telephone interview, Honk received at least 17 calls for service from people the company’s operators were able to identify as AAA employees — including a local manager in New Mexico — by Googling their names. At least 11 of those calls were subsequently canceled after a truck was dispatched. It appears that at least some of these AAA employees may have been instructed by their superiors to make the calls.

AAA did not respond to multiple requests by VentureBeat for comment.

Like Uber and Lyft, Honk lets users put in a service call through either an iOS or Android app. Many times, within five minutes, Honk’s tow truck drivers call the distressed motorist to let them know approximately how long it will take to arrive. When the tow truck driver is someone who has worked frequently with Honk, the system directly connects them with the motorist. But if the tow truck driver is new to Honk’s network, they first route the call through the company to answer any questions the driver might have, and only after that is the motorist conferenced in. 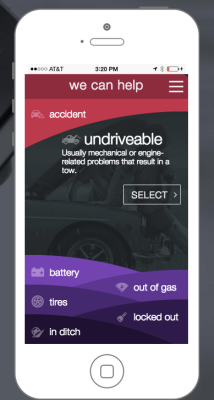 Above: Honk lets anyone order roadside assistance via an iOS or Android app.

According to a transcript seen by VentureBeat of a December 4 conference call for a lockout in Los Lunas, N.M., the Honk operator remained on the line, unbeknownst to the tow truck driver and the motorist. The tow truck driver — who also does tows for AAA — recognized the caller as a local AAA manager.

During the call, the AAA manager told the tow truck driver that, “Here’s the deal: I don’t want to waste your time or nothing. I’m not really locked out. They just got me testing out this service. … I’m supposed to tally how fast they get here.”

A moment later, after some back and forth over how long it would take Honk to get a tow truck to the scene, the AAA manager said he wanted to cancel, and that, “You understand I’m not really locked out?”

In the transcript of another call, from Rowlett, Texas, the tow truck driver told the supposed motorist — also identified as a AAA employee — that “we’ve gotten a lot of calls from AAA and what you guys have been doing is calling and canceling and obviously it puts our system into motion and it’s creating a lot of [gone on arrivals] … so I just wanted to make sure you really needed a jump.”

The AAA employee replied, “I do… yeah” and then explained that the reason they had used Honk instead of AAA was that they no longer had any remaining AAA service calls this year.

Honk has not been amused by what it sees as interference in its business practices. On December 8, the company’s lawyers replied to AAA’s cease and desist demand with its own letter.

“Honk has received multiple reports that numerous AAA employees have been improperly using the Honk mobile application to submit knowingly false requests for roadside assistance,” reads the letter, which was obtained by VentureBeat. It continues:

“When cancelling those requests, Honk and its partners have been advised by these AAA employees that they were directed by AAA to conduct assessments of the Honk service by their supervisors at AAA through these false reports. These admissions by AAA employees were witnessed by both Honk and its partners. Such conduct by AAA raises extremely troubling questions about AAA directing its employees to make intentionally false requests for roadside assistance in order to cause Honk competitive harm and have already damaged Honk’s relationships with its roadside assistance service partners.”

According to Brundage, the false calls appeared to have stopped after Honk sent its letter.

Brundage also said that the pattern of cancellations had raised eyebrows at Honk even before identifying the AAA connection because the “cancellation rate is [usually] next to zero.”

To Honk’s CEO, the behavior is an indication that an assertion by AAA in the USA Today article that it is “not worried” about the competition is untrue.

“This is a multibillion dollar company,” Brundage said of AAA. “They are coming out and making statements that they are not threatened by this growing space. But it’s very clear by their tactics that they are.”