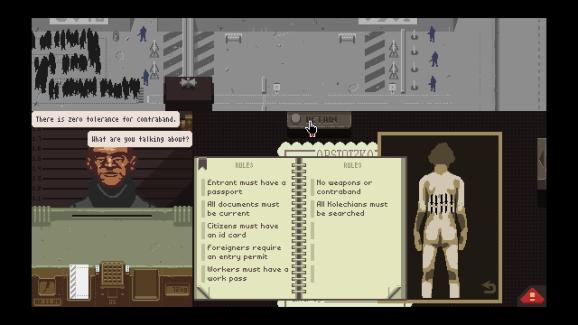 The scanner in Papers, Please.

The iOS version of the sobering border-guard simulator Papers, Please is out today, but it doesn’t include one of the its most invasive aspects — but that will change.

Yesterday, we reported that developer Lucas Pope planned to release Papers, Please on iOS but without the feature that shows immigrants completely nude during the security scan. That’s because Apple rejected the app when Pope originally submitted it, and the company explained it was because it is “pornographic.” Today, Apple is stepping back from that classification, according to Pope.

Papers, Please has players controlling a border agent who must decide who to let into the fictional country of Arstotzka. You base your decisions on the information you get from people’s documentation and by invading their privacy. The point is to make players feel complicit in ripping dignity away from people in the name of security.

Pope was planning on appealing Apple’s original ruling, but that is now unnecessary. Pope explained that Apple should approve Papers, Please, nudity and all, if he submits it again.