Fifteen years ago, the physical effects in games were pretty lame. But a handful of bold game developers started figuring out how to incorporate physics into the behavior of objects in games. If you smashed a wall, it had to crumble into pieces in a realistic fashion, or the resulting animation would destroy the fantasy of the game.

At the time, 3D graphics were still advancing at a rapid rate. But the fake part of the games was the motion and the lack of interaction with physical objects. So a team of experts quit their doctorate studies at Trinity College in Dublin, Ireland, to create a startup called Havok. The company was acquired by Intel in 2007, and the physical effects that it helped create were used in some of the biggest games of all time, such as Half-Life 2, BioShock, The Last of Us, Uncharted, the Call of Duty series, Battlefield, Dark Souls, Far Cry and more than 600 other titles.

We talked about that with David Coghlan, president and managing director of Havok, in an interview this week. I wrote a story for the Wall Street Journal about physics in games in 1990s. Back then, Seamus Blackley, who would later become co-creator of Microsoft’s first Xbox game console, tried to make physics the star attraction of his dinosaur game, Trespasser. But the physics couldn’t save that game when it debuted in 1998. I chronicled some of that story in my book about the making of the Xbox, and Coghlan read that book as he joined Havok.

While the 3D graphics made the game pretty, the physics made them interactive. You could kick a ball and watch it soar through the air like a real ball. Or you could shoot an enemy on a tower and watch the body topple like a rag doll to the ground.

“I wouldn’t say graphics were a solved problem, but they were very sterile, static environments,” Coghlan said. “They certainly looked visually impressive by the standards of the time. The early 3D titles like Doom and Quake raised the bar. But the worlds the players were playing in were extremely static worlds, and in many cases, little more than mazes.” 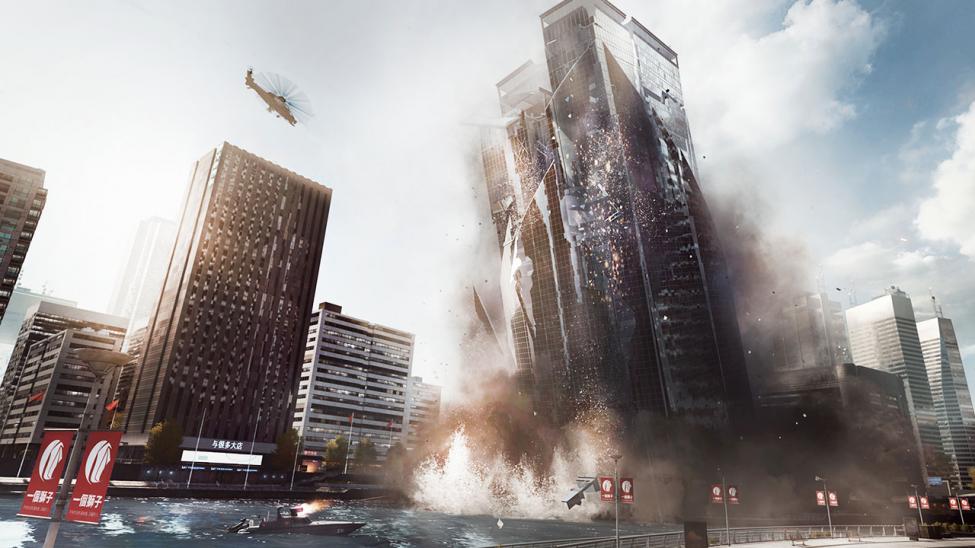 Above: Collapsing building in Battlefield 4.

The physicists built software that made it a lot easier for developers to incorporate physics into the objects that they created. And the developers have run with it.

“Now it has come a long way,” Coghlan said. “Every 3D game is an interactive experience. It’s something you can navigate through. Early games like Half-Life 2 and Max Payne 2 showed what was possible with a truly interactive 3D world. As a result, the face of gaming has changed.”

Coghlan noted that Electronic Arts DICE studio continues to push physics further with destructible environments in its Battlefield series of games. The Uncharted series from Sony also pushes the envelope on physics, he said.

“It creates a high-octane, Hollywood-style experience that runs on a consumer grade piece of hardware,” he said. “Players can interact freely with objects in the environment, or the environment itself. You can destroy buildings, or see character-to-character interaction that uses realistic physics.”

Physics thrived thanks to gamer PCs with better and better graphics cards. The PlayStation 2 and the Xbox were the first machines that had the horsepower to implement some physics in a world. Now the Xbox One and PlayStation 4 can handle physics, 3D graphics, and speed without compromise. And mobile devices can run games with physics, such as Angry Birds and Infinity Blade. Havok or its rivals are used in most of the highest-rated games in the industry now. Bad physics in a game is as noticeable now as missing sound in a game, Coghlan said.

Coghlan said, “I don’t see any future where physics is a solved or static problem. It’s the same way that we will see 3D graphics improve in the next five or 20 years. It opens up new types of gameplay experiences. Developers are only constrained by the particular vision that they have for a title.”

Here’s Havok’s view of the history of physics in games.

Above: Havok’s timeline of physics in games.