Shuffler.fm has been building out its curated music-discovery platform since its launch back in 2011. At the heart of the service is a Web and iOS application that taps the tastes of online music magazines, blogs, and other opinion-shapers to deliver a curated package of the best new music out there.

Back in February, however, Shuffler.fm introduced a new standalone service to the mix called Pause, which is basically a super-curated multimedia music magazine for iPad that pulls together some of the best writings from the likes of The New York Times, Billboard, the Guardian, Pitchfork, XLR8R, and DUMMY, among others.

The Dutch startup has been working fervently behind the scenes these past 12 months, introducing a Pause iPhone app back in April, and this week it has finally introduced a version of Pause for Android too. 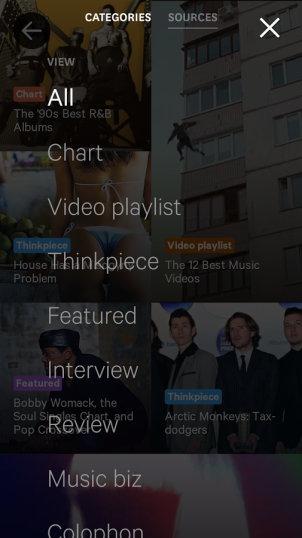 As with the iOS incarnation, Pause for Android serves up a quarterly music periodical that pulls together features, interviews, reviews, and long-reads, not to mention music charts, videos, and audio. It is actually a genuinely great service for those who don’t have time to keep their finger on the Zeitgeist.

Shuffler.fm currently has 10 staffers working from an Amsterdam office, but it is looking to start ramping things up in the new year.

Indeed, the company is introducing some new offshoot series to its current quarterly edition, which itself will be shifting to a monthly magazine. In effect, the company will serve up 52 different issues next year across the spectrum.

Shuffler.fm is also looking to move beyond music into other verticals, including food, travel, fashion, and more. It’s basically striving to take its deeply-curated approach from the music realm and apply it to other areas of interest.

“We want to facilitate deep explorations, similar to our current series — the best content from any given interest, in a well-curated package from experts,” explains cofounder Tim Heineke.

“We really want people to take the time to ‘Pause’,” says Heineke. “I think we are suffering from digital obesity, and anxiety. Google, Facebook, Twitter … often [generate] infinite timelines and [are] general-interest based. The web is a treasure trove waiting to be explored and we don’t want to waste people’s time.”

For now, Shuffler.fm and Pause are focused firmly on the music realm. But the company is already working on ways to open things up to more users. It’s slowly rolling out Pause as a platform in its own right, letting other companies launch their own apps and magazines using its technology. Heineke says that both Live Nation and Universal Music have tested it out for dedicated artist and festival apps.