Our hero peeks out from the bushes, calculating eyes glinting like a cat’s underneath a face-obscuring hood.

The clueless guard doesn’t know he’s been watched, his movements timed to evade their notice, and now, as the unknowing sentry passes in front of the foliage, his killer emerges from the leaves. The guard is dead before he realizes any danger ever existed, and the murderer continues to the next target.

That scene isn’t from either of the Assassin’s Creed games that came out this year. It’s actually something I did all of the time in Sneaky Sneaky, developer Naiad Entertainment’s stealth game out now for PC and iOS (reviewed version).

At its best, this game out-Assassins those bigger games, but some odd A.I. and a ridiculous difficulty curve might scare you away before you can fully appreciate it. 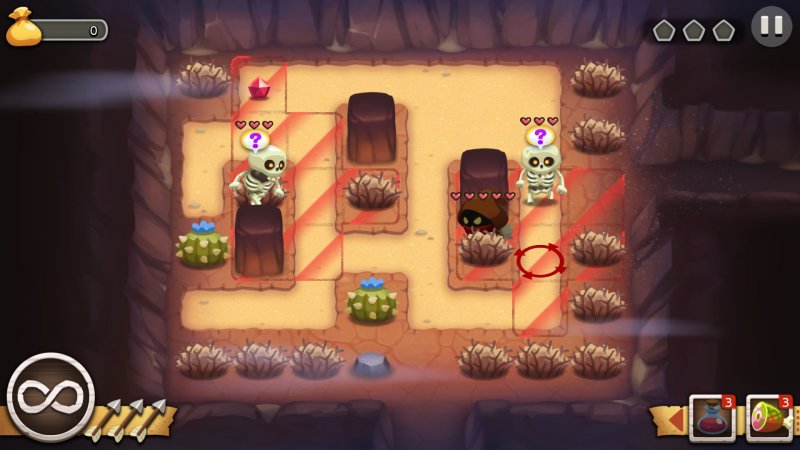 Above: Enemies who see you will investigate your last known position, which that red circle on the right represents.

It’s fun to be sneaky

The plot is that your character, Sneaky, is a thief who has just landed their biggest haul before landing in prison and having to bust out to reclaim the jewels scattered all over the world. And because Sneaky is a thief named Sneaky, you can probably guess what your approach is going to be.

The best stealth games are basically puzzles in which your goal is figuring out how to get through each area instead of, say, how to get three of the same thing in a row. In Sneaky Sneaky, you accomplish this by studying enemy patterns and timing your own movements to avoid their area of detection, which is marked with red-striped squares.

It’s satisfying to make your plan and then send Sneaky out to enact it — with one exception, which I’ll get to later. And hiding in a bush or haystack for your foes to walk by and then reducing them to a puff of smoke (no corpses here; this is a cute game) with a single tap of your screen makes you feel as slick and deadly as an Assassin’s Creed hero. 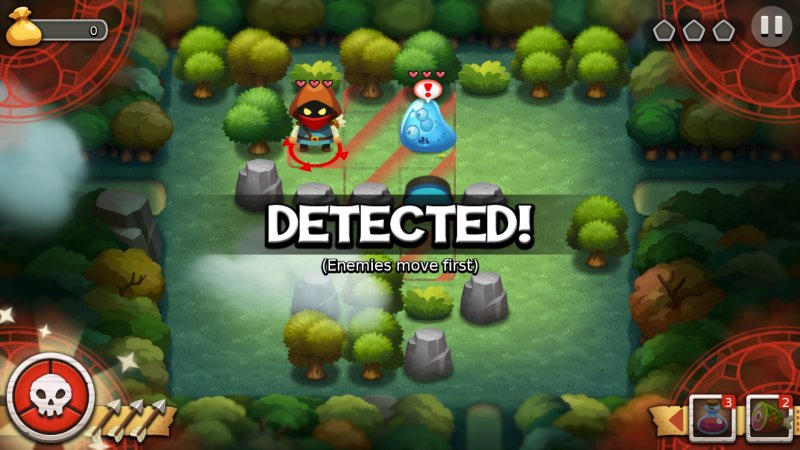 Above: Slime-blobs move in unpredictable patterns.

You always have options

Lending to the puzzle-like element of Sneaky Sneaky is how each screen is its own self-contained thing, just like in 2D Zelda games or Road Not Taken. Each has its own layout that exists independently of the “rooms” around it, so you can really focus on one at a time to figure out the best way to get through it.

Your choices include total stealth, clearing the room with surprise attacks, picking off enemies at a distance using your bow and arrows, or any combination you like as circumstances require. The arrows were my favorite; on the iOS version, you just drag across Sneaky to draw the bow, and then you can aim in any direction before lifting your finger to fire. If you get good enough at this, you can even take out enemies that require multiple hits before they can reach you to counterattack.

When an enemy sees you or your stealth attack doesn’t take all of their health, Sneaky Sneaky switches to a turn-based system in which whoever initiated combat gets to go first. Each of you gets three moves or attacks per turn, and obviously, whoever dies first loses. You can also get out of a fight by getting out of your opponent’s line of sight and then hiding until they give up and go back to their normal patrol, so you still have a slight chance even if you’re completely outmatched.

Sneaky has no sense of self-preservation

Good stealth requires complete control of where your character is at all times, and unfortunately, Sneaky Sneaky has some problems there.

Since all you do to move is tap the square you want Sneaky to end up in, the actual path our hero follows isn’t always predictable. So sometimes you’ll pick your endpoint, and the little idiot will decide that the best way to get there is to walk directly in front of the guard you were trying to avoid. And that’s one way of doing it, I guess.

Your best option is to only move Sneaky in straight lines, but some rooms demanded one continuous run — with turns — to pass between fields of vision or make it by before an enemy turned around. And in those cases, it would be more useful to be able to trace out a path in advance and then just tell the thief when to start moving. 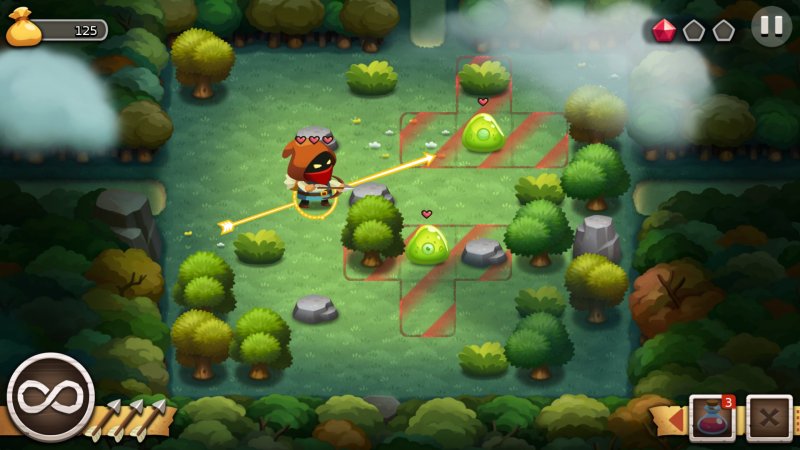 Above: The bow is both easy to use and effective.

The difficulty goes from zero to ‘@!#?@!’ pretty quickly

Around the time you have your first run-in with a wolf in Sneaky Sneaky, you’ll start to channel the potty-mouthed, classic game character Q-bert. Wolves are right snarling bastards with huge detection zones, you can’t stealth-kill them in one hit — at least, not right away — and their powerful jaws will reduce your health to nothing before you can say, “Oh crap, not a wolf.”

The obvious solutions are don’t the wolf see you or to attack it first to give yourself the advantage, but even simple mistakes like Sneaky taking a route you hadn’t planned on can get you a face full of teeth no matter how much planning you’d done.

Later on, enemies can destroy your hiding places or avoid obstacles that would normally block their line of sight, and it can all just get to be too much, man.

Other than some really frustrating quirks, Sneaky Sneaky is a cute and challenging game that gives you plenty of options in how to survive its obstacles. Just stop walking in front of those damned guards, Sneaky.

Sneaky Sneaky is out now for PC and iOS. The developer provided GamesBeat with a free iOS download code for this review.