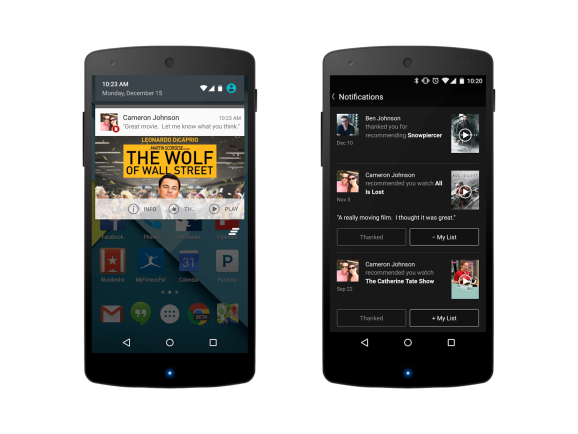 The Netflix Android app update adds a set of social recommendation features, which essentially make it easier for you to share a particular movie or TV show with a friend via Facebook. The sharing is also done privately, and alerts people the next time they open Netflix. This particular feature first launched for the Netflix website and other platforms back in September, as VentureBeat previously reported.

But that isn’t the only thing Netflix is adding for Android users. The company Android app update also includes new features for those sporting a smartwatch running Android Wear, which will alert you when someone sends a recommendation as well as allows you to do other things like play/pause movies, thank friends for the recommendations, and more.

I’m actually pretty excited to see Netflix being among the first streaming video services to embrace smartwatches, which seem like a far more practical way to toggle through smart TV user interfaces than a clunky remote control. Check out the screenshot for a closer look at Netflix’s Android Wear functionality.