A new study found that more than half of players are downloading their game content on consoles or PC, and that 75 percent spend at least some time playing free games. A third of all gaming time is spent on free-to-play titles, the study showed.

Jason Anderson is the president of Insights Meta, the Kansas City, Mo.-based company that conducted the 1,749-gamer survey. He said the company expects that by the end of the current console life cycle, most game sales will come from what they call “digital natives,” gamers who prefer downloads over discs. And nearly everyone is playing some free and some paid titles — which is part of how the mobile game industry could reach $25 billion by the end of the year.

“We were trying to figure out how to segment the free-to-play market, and it was all the same people,” Anderson said. “This is either a truth that has always been there about free-to-play and its impact on the pay-to-play markets, or the adoption has been very aggressive. 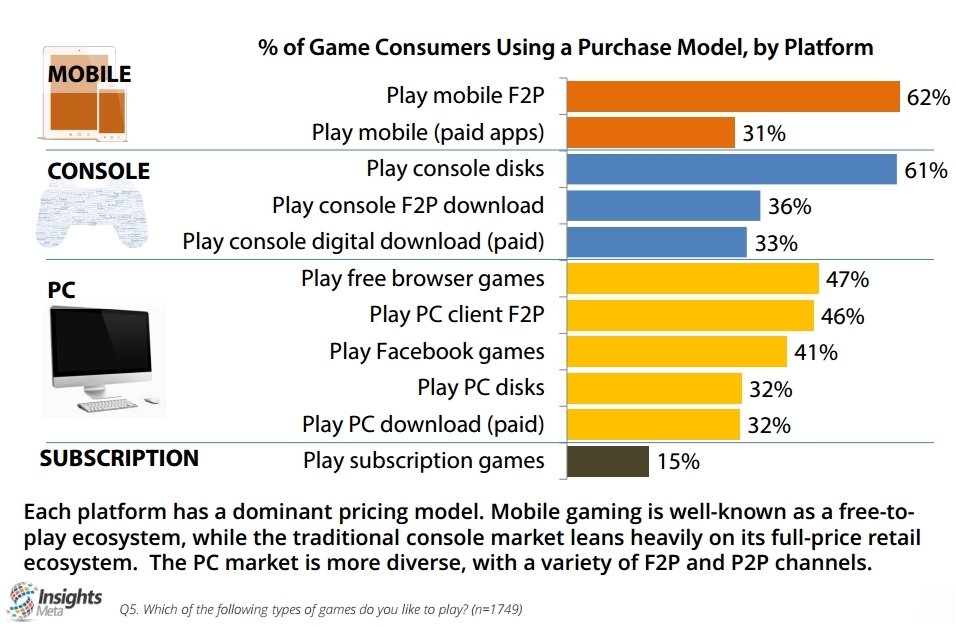 Digital downloads are a huge part of the gaming market

The Insights Meta survey suggests that digital downloads are rapidly becoming the way players get their game content. The same number of gamers play purchased, downloaded PC titles as gamers who play those games on disc, the survey shows. A third of gamers have downloaded paid content on their console; just over 60 percent play games on disc.

“The paid download share is much larger than people realize,” Anderson said. “Publishers have an understanding of how their own individual titles are performing in that regard. I don’t know that people realize how successful it is becoming across all titles.”

The company hasn’t done this survey before, so it doesn’t have any historical data to compare these results to. But their suspicion is that downloaders are on the rise, and fast, Anderson said. PC gamers have embraced the option of avoiding piles of install DVDs, and console gamers have become used to the downloadable content (DLC) model for games they already play on disc.

Millennials make up most of the “digital natives” market segment Insights Meta refers to: “The idea of buying something and downloading it rather than buying a disc is a no-brainer for them,” Anderson said. “It would be their first preference.”

And that generation is just starting to flex its buying power.

“My guess is that at the end of this console cycle, it’ll be the digital natives that drive most of the revenues. It’s a permanent tipping point,” he said. Once that population firmly embraces making all purchases digitally, the infrastructure and pricing models that console and game makers put in place for them will encourage other gamers to come along.

Right now, consoles account for slightly less than half of all gaming revenue, with the other half coming from PC titles, retail downloads, subscriptions, and the like. Revenues from in-game purchases in F2P games account for 15 percent of the overall market.

“Those high-consumption players have an impact,” Anderson said. He was surprised to find that the number of gamers playing F2P content on PC was about equal to the number playing on mobile, but said those PC players are frequently core gamers, playing League of Legends, Counter-Strike, and the F2P Battlefield content. Mobile F2P gamers are more diverse. 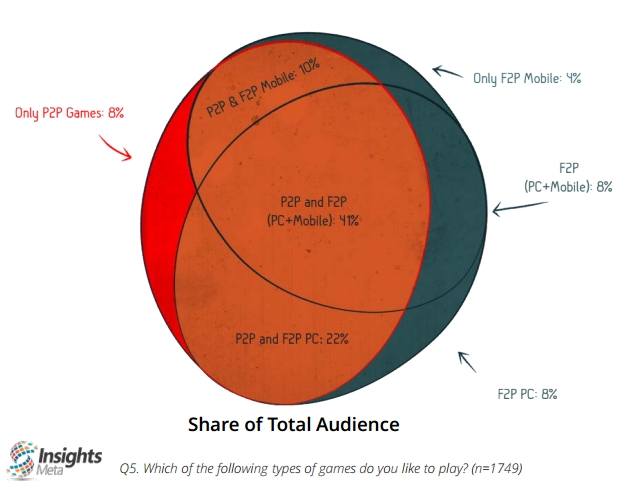 Above: This chart from Insights Meta shows how player audiences overlap for different free-to-pay (F2P) and pay-to-play (P2P) platforms.

Those numbers are self-reported by players and likely include game demos and titles that came free with Xbox Live Gold or PlayStation Plus subscription services, Anderson said. His firm considers the free-to-play market on consoles to be the biggest opportunity for growth in the market.