Location awareness is one of the most useful and popular features for mobile apps, but relying on GPS for accuracy can take a huge toll on battery life.

According to Pete Tenereillo, PathSense’s CEO, there are more than half a million apps for iOS or Android that utilize some location component. “One hundred percent of those would like to run precise location 24/7,” Tenereillo argued, “but they can’t, because it would burn too much battery.”

Today, there are multiple approaches to determining a mobile phone’s location. GPS is generally the most accurate, but has the biggest battery tax. It’s also possible to triangulate using a combination of signals from a carrier cell tower or using Wi-Fi. But cell network location has a potential radius of a mile, said Tenereillo, while Wi-Fi — though accurate to within 200 yards — often doesn’t work, especially on the go. Even GPS, he said, is sometimes unreliable in urban downtown areas with “canyons” of skyscrapers.

PathSense’s method utilizes smartphones’ internal sensors — gyroscopes, accelerometers, magnetometers, and others — as well as a predictive routing algorithm to determine the location and then track it. Because the system is meant to ping GPS just once when an app launches, in order to determine the starting point, it is designed to maintain location awareness with minimal battery drain. And in many cases, outdo even GPS for accuracy. 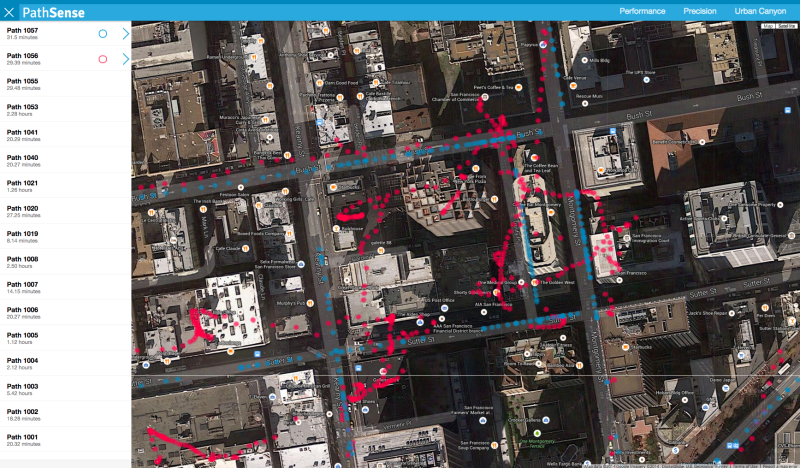 Above: PathSense believes its technology can outdo even GPS for location accuracy. The red dots indicate GPS in a downtown area, while the blue dots are PathSense’s tracks.

In addition, although the system must initially pull information from PathSense’s geospatial servers — requiring connectivity when location awareness is first turned on — everything is then cached on the device. That means PathSense can track location subsequently, even with no Internet access.

Although PathSense has yet to determine a business model, it is hoping large numbers of developers will integrate it, particularly because only two extra lines of code are needed to add the functionality to an existing app.

Tenereillo said PathSense would be an ideal addition to services like Facebook or Yelp since both rely on knowing users’ location in order to deliver relevant information. The more accurate and timely that information is, the more targeted ads or other offers could be. “This sort of precise location is what all these apps want,” Tenereillo said, “but have not been able to have in the past.”

Although few have seen PathSense in action, it’s clear that if the system can deliver on its promise, it would have a potentially huge impact on mobile app development.

“There are an awful lot of apps that use location, and we certainly know that as consumers use their smartphones more and more, managing battery becomes an issue,” said Avi Greengart, an analyst with Current Analysis. “When Bluetooth [upgraded] to 4.0 Low Energy, and suddenly keeping your radio on didn’t kill the battery quickly, we saw an explosion of wearable and control technologies for Internet of Things taking advantage of it.”

Added Greengart — who spoke generally, and not about PathSense in particular — “There’s no question that location-aware apps running in the background without impacting your battery life is a pretty exciting thing.”

PathSense was founded by several of the people behind Trapster, a popular location-based app that helped drivers avoid police speed traps, and which was acquired in 2010 by Nokia. To date, PathSense has raised $500,000 from a group of investors, and is currently looking to raise an additional $1.5 million. “I love to invest in top-notch teams creating disruptive technologies that solve big problems,” said early PathSense investor David Schwab, the managing director of Sierra Ventures, in a statement provided to VentureBeat. Tenereillo “is a many-time entrepreneur with a long track record of success. … PathSense has created an innovative software solution to a well-known problem that impacts more than 1 billion smartphones: GPS battery drain.”

The question, of course, is whether PathSense can actually deliver what it’s promising. Tenereillo told VentureBeat that the company hopes developers will be able to start deploying its technology as early as Feb. 1, 2015. But right now, he said, it is still working with two unnamed partners to scrub bugs.

To Greengart, though, it’s all about follow-through. “When somebody promises you magic, and delivers, people see the value,” he said. But “I’m always skeptical when someone promises me magic.”

Although companies like Skyhook and Geoloqi are also trying to address the problem, PathSense believes its method has never been tried before. And there’s clearly a need for this kind of technology. As Foursquare cofounder Naveen Selvadurai — a personal friend of Tenereillo’s — put it in a presentation deck provided to VentureBeat, “Battery drain is hands-down the biggest problem for location-based apps.”