The Crew is the confused adolescent boy of driving games. In an awkward attempt to find its place in the world, it stumbles through several identities – never quite finding one that fits.

With nearly 2,000 square miles of American map space, it is clearly an open-world driving simulator of a scale not typically seen in the genre — and an ambitious new IP from Ubisoft. And yet, virtually all of The Crew’s side quests, skill challenges, and ill-conceived story missions are difficult races.

The apparent versatility of The Crew fades into a jarring and frustrating gameplay experience after only a few hours.

However, a few strong features save the game from being a total loss and manage to give garage monkeys everywhere a sliver of hope should the franchise live to see another game.

A massive, vibrant retelling of the United States 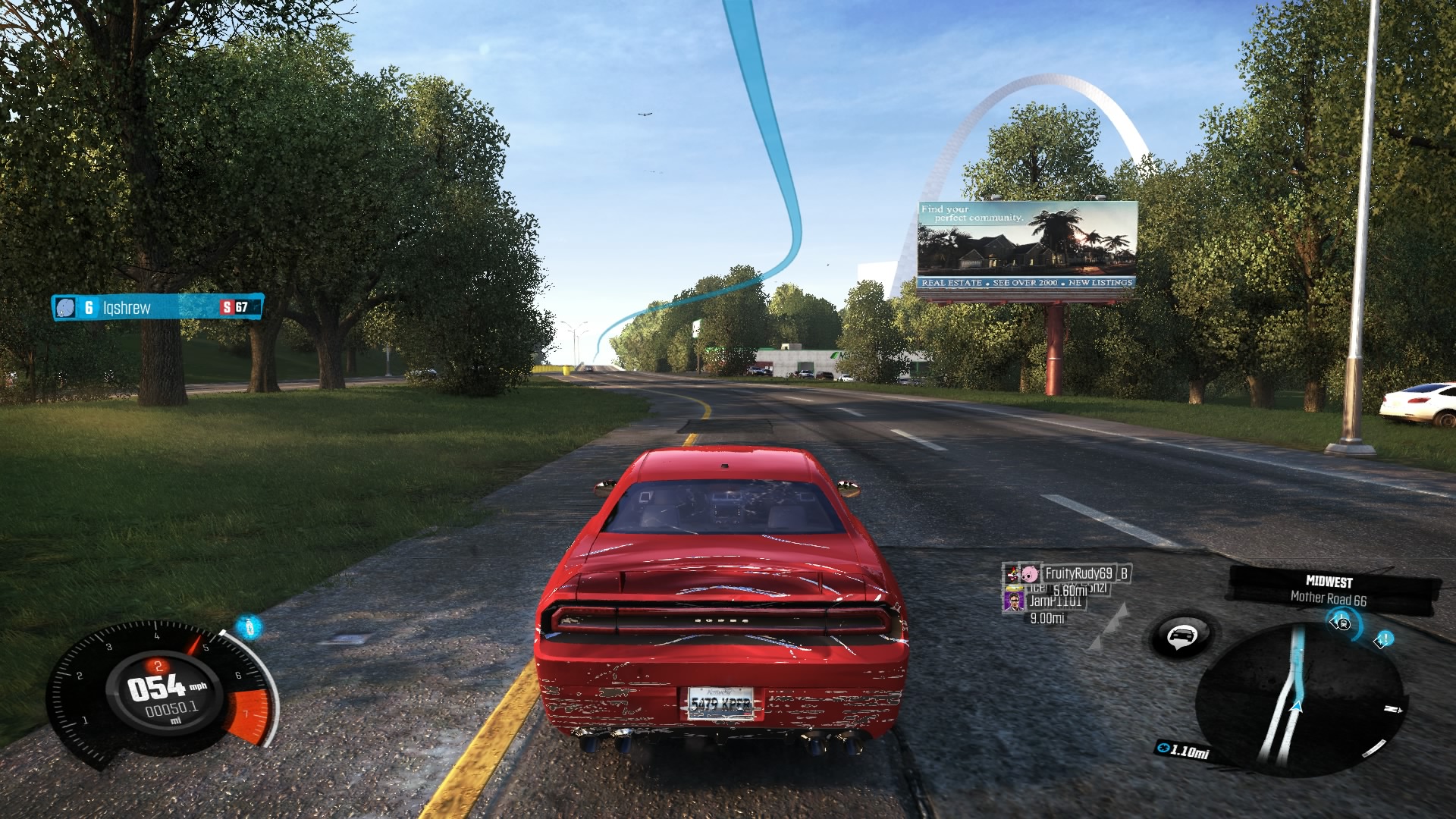 Above: Welcome to beautiful St. Louis! You can tell because of the arch.

I was awestruck when I first laid eyes on The Crew’s dynamic setting.

I immediately drove from the starting area in Detroit to New York and up the northeast coast into a condensed version of Cape Cod, Massachusetts.

The 30-minute trip took me through artist renderings of rural Pennsylvania and West Virginia, which is dubbed “Coal State.”

This distinction is important – The Crew’s map is a romanticized artistic expression of the United States, not an accurate representation. States are completely removed or jumbled around between The Crew’s six major cities: New York, Chicago, Detroit, Miami, Las Vegas, and Los Angeles.

These metropolitan areas don’t mirror the meticulous detail of say LA Noire’s 40s-era Los Angeles or Watch Dogs’ near-future Chicago. Still, the depictions of well-known landmarks and cityscapes give players a sense that they are where the map says they are. I’ve been to three of the six cities, and I recognized many of the familiar tourist traps.

The six cities sit in The Crew’s five regions: West Coast, Mountain States, Midwest, East Coast, and The South. It is in the filler area of these regions that drivers find slightly smaller metropolitan areas, such as Dallas or Santa Fe, New Mexico.

Some people will find these recreations stereotypical; The Midwest region is covered in corn fields, and most of the East Coast looks like the setting of the Cider House Rules movie adaptation.

However, I found these choices charming. Finding my hometown of Fresno, California was a delight. Even though it looked absolutely nothing like my city, I loved looking at what a development team in Lyon, France thinks Fresno should look like. It was just like watching a movie set in a real place but clearly filmed on a studio lot in Hollywood.

The areas are also flooded with things to do, such as sightseeing trips, hundreds of skill challenges and difficult cross-country races – some of which take more than an hour to complete.

This living, breathing map stands as one of The Crew’s few shining achievements, and fans of social driving simulators like Forza Horizon will feel right at home exploring every nook and cranny.

A stellar progression system for both players and vehicles 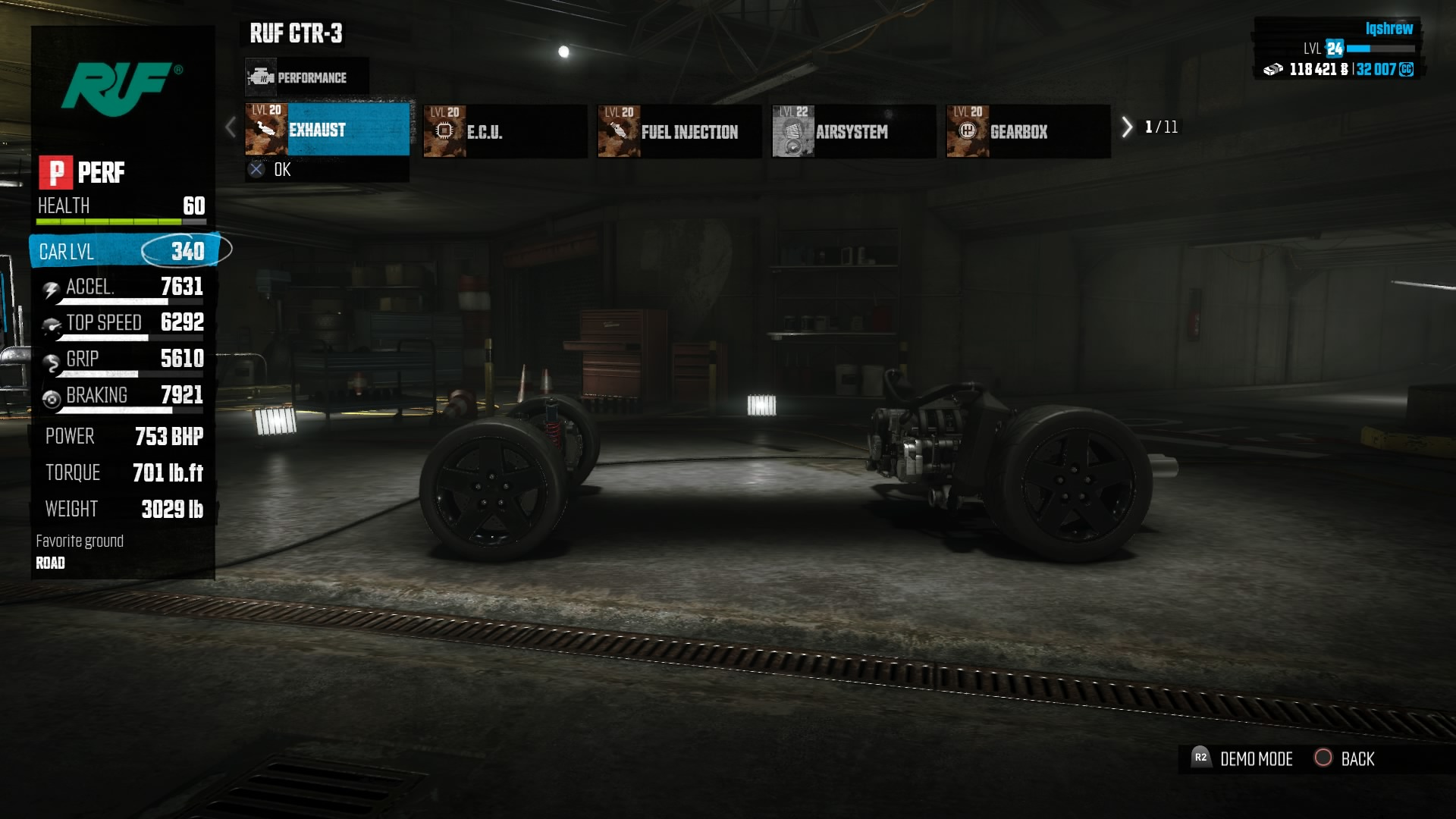 Above: The Crew’s vehicle progression system.

After I cleaned the drool off of my shirt from ogling The Crew’s map, the game’s progression system drew me in further.

The Crew features a dual-progression system in which players level up individual cars and driving skills separately.

Missions, skill challenges, and side quests give experience points, which contribute to player level. Each new level allows the player to choose from several sets of perks, provided they can survive the abysmal story missions (see below). These perks include things like discounts on buying cars, bonuses to your vehicles’ brakes, and upgrades to your heads-up display (HUD).

These same missions also unlock new parts for whatever vehicle you used to complete them. The Crew has 11 different part designations and a leveling system that mercifully simplifies their usefulness. If an unlocked part will improve your car’s performance, the car’s overall level will increase. If it won’t, you have the option to sell the part.

The two systems allowed me to make choices that suited my skills – or lack thereof – as a driver. They also allow players to create drastically different versions of the exact same car, which is important because The Crew’s selection of about 50 playable vehicles pales in comparison to some of its competitors’ rosters. 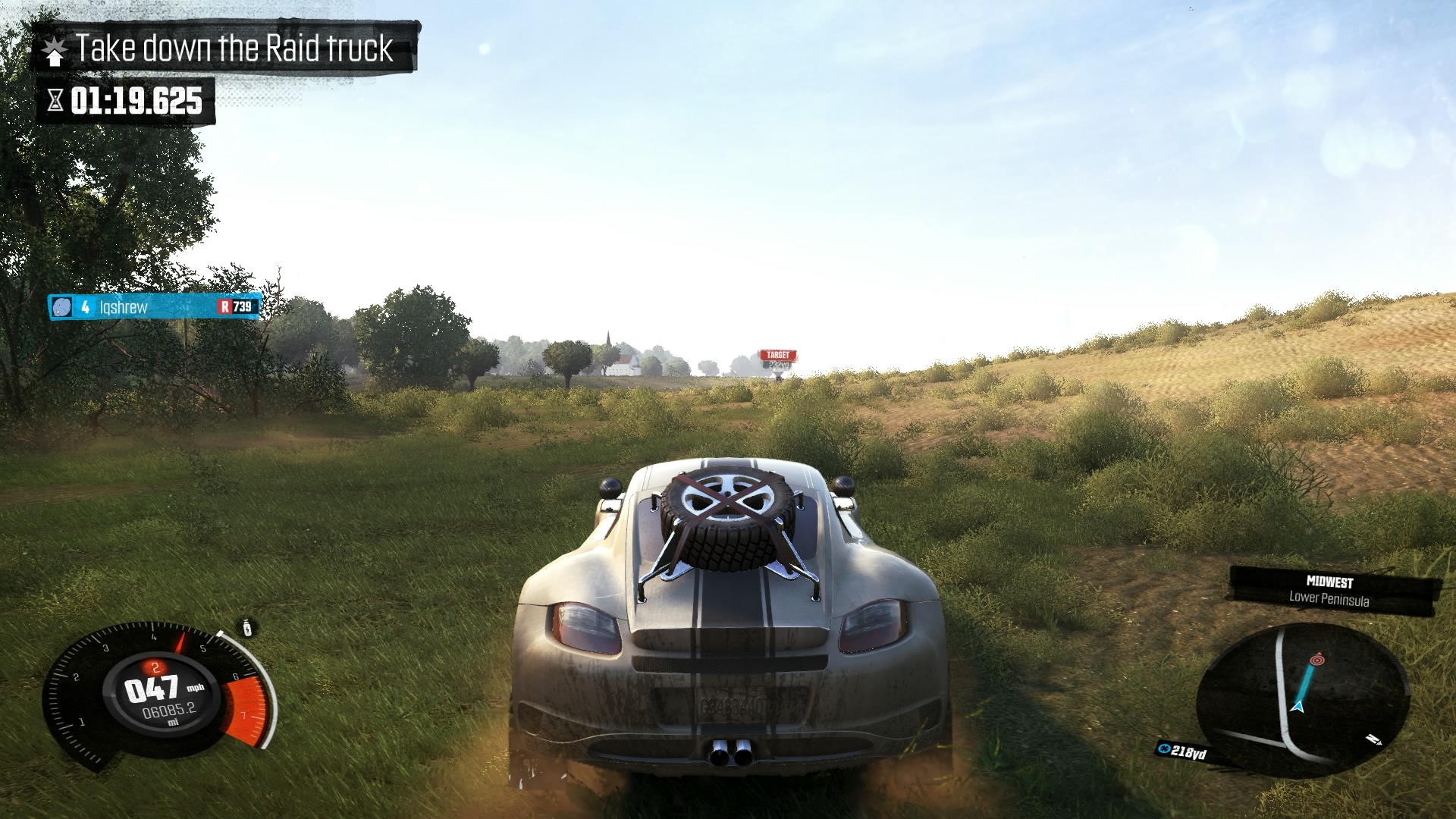 Above: Why am I chasing this guy? And why does he get such a big head start?

If you take anything away from this review, let it be this: This is one of the worst storylines I have ever seen in a video game.

It starts out with a predictable and far-fetched plot device before spiraling out of control into a series of horrible driving clichés. At no point during the painful, 20-hour story missions did I feel like I was playing a role in an original narrative.

In fact, I am almost certain that I heard a baritone movie narrator speak during the opening quest:

“In a world where gang activity, crooked cops, and street-racing justice collide, one man must make it out alive with only his car, his skill, and his ass-kicking boots to help him. Troy Baker is Alex Taylor, a hipster and one-time gangster errand boy turned FBI double agent.”

The Crew basically tasks players with doing everything they would in Grand Theft Auto V, only they have to use a car. Are people shooting at you? You’d better outrun them or wreck them, because you sure as hell don’t get to shoot back or leave your vehicle for any reason. What’s that, the boss needs to be picked up at the airport? You can do that, and you did it 15 or 20 times throughout the story mode.

The main character doesn’t even leave his car to talk to people. Most of the dialogue is done car-to-car, which looks ridiculous. I get that it is a driving game, but I don’t see any reason to have to suspend reality in such drastic ways to get that point across.

Nearly all of the story missions are a race against impossibly talented AI opponents or a brutal clock, which totally undermines the game’s otherwise loose, driving-simulator feel.

Lead Game Designer Serkan Hassan of The Crew developer Ivory Tower summed up the title’s goals when I interviewed him in September. “We believe we have something for car fans as well as someone who doesn’t typically play driving games.”

Well, I don’t typically play driving games, and The Crew’s story missions did not give me that feeling. I spent nearly three hours trying to complete the three-minute long “Turf War” mission and almost as long grinding through the unfortunately titled “The Harry Situation.” That was not fun, and it was a mandatory agony given that I had to complete the story mode to unlock all of the perks.

The Crew would have been much better off axing the story aspect completely and focusing the sweeping multiplayer features.