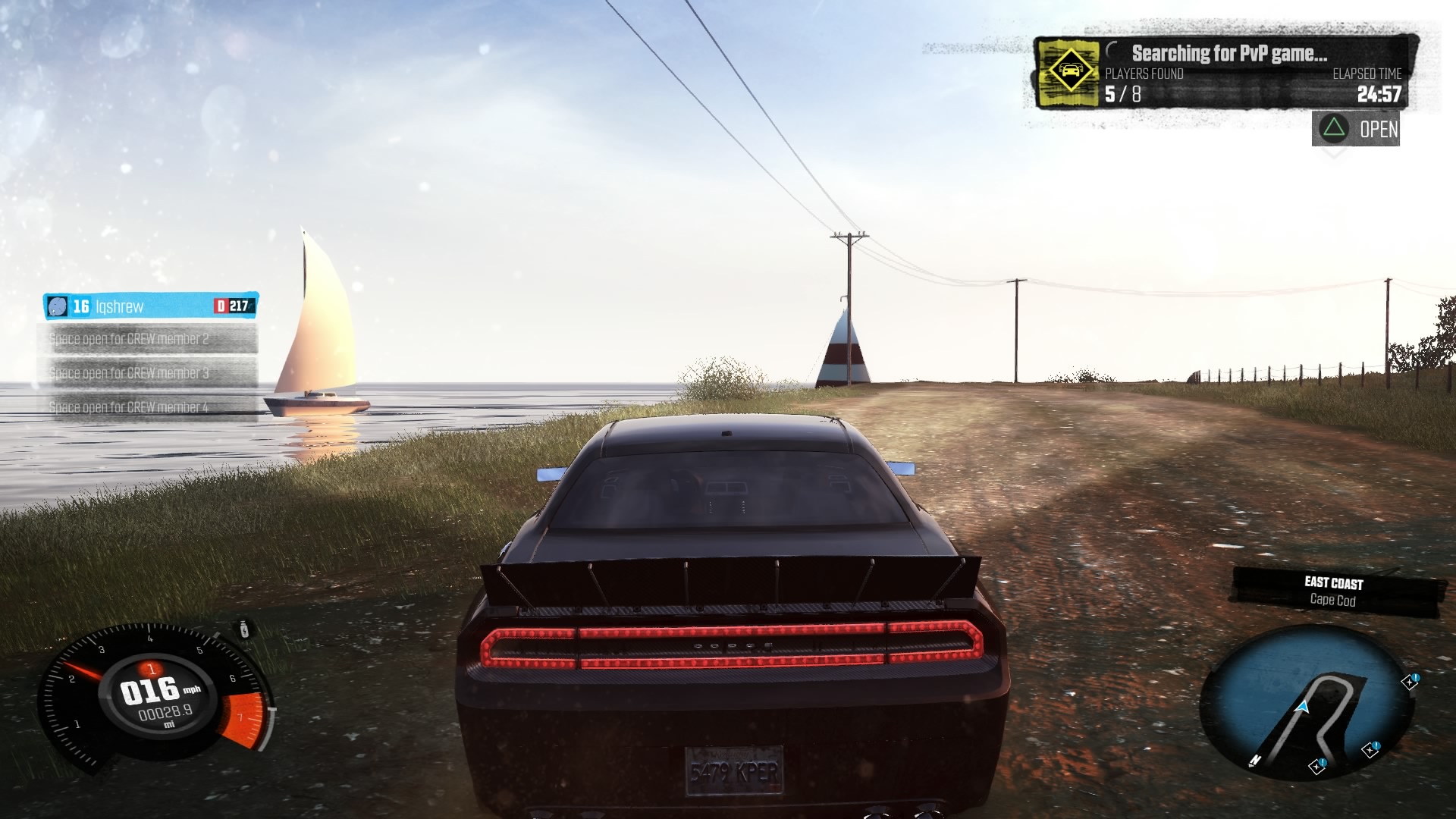 Above: Cape Cod is lovely this time of year. That queue time is not.

A few of the features and game mechanics are broken

Amidst a smattering of crashes and bugs, I pinpointed two consistent problems in my PlayStation 4 retail copy.

The first was with the player vs. player matchmaking system. It doesn’t work. Even if you were placed in a crowded multiplayer session, the queue time is 15 minutes at the absolute minimum. And that’s if you get in at all. I saw a handful of timers climb up to 60-70 minutes before abandoning all hope.

Luckily, players are allowed to complete missions and challenges while waiting.

The second issue is the mechanics governing vehicle collisions. It feels as if the developers cut a corner here – maybe a bright-eyed intern let them know three days before the launch that players will sometimes crash.

Rather than explain some of the inconsistencies, I will show you.

This doozy caused me to cry out “did I hit a rock?!” I may have added a colorful adjective before I said rock. Note that the telephone pole did not cause the accident. They don’t do that. I also went through the map.

Here you can see me savagely sideswipe cars at excesses of 150 mph with little consequences. The video culminates with a fatal head-on collision that instead results in me being casually brushed aside by the oncoming vehicle. I didn’t even want to do the speed challenge, but it wouldn’t let me avoid the starting brackets.

Maybe this is a minor flaw, but the actual term “crew” means three different things as you travel around.

First, a crew means your network of allies for the single-player story modes. This crew grows as you progress through the story, and it’s these crew members who offer you perks as you level up.

A crew is also a quickly formed in-game party with other players in your sessions. Players use these crews for story missions, difficult faction missions, PVP races, or cruising around.

And finally, a crew loosely refers to a more serious version of the above pairing. This crew is similar to a guild in that you play The Crew together often and become actual friends.

The Crew also features factions, which players join at level 20. Players pledge their loyalty to affiliate gangs – identified by regional animal totems – to compete for respect, bragging rights, and an in-game currency salary awarded for logging in each day.

Why aren’t factions also called crews? That’s impossible to know for sure.

I get that this a weird thing to jump on, but come on people. Languages throughout the world have many words to choose from. Take the plunge. 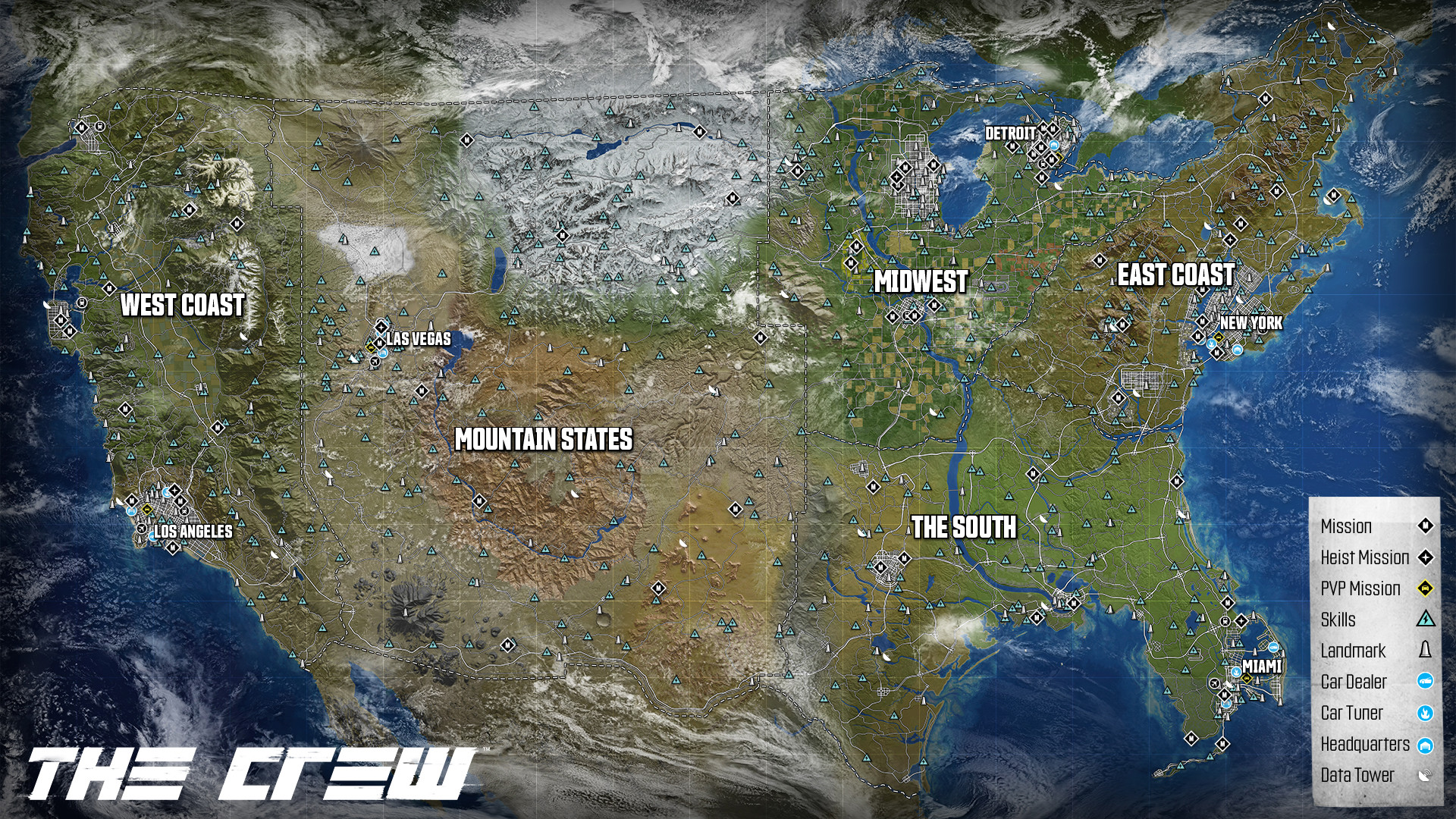 Above: Each dot is something to do or see on The Crew’s map — provided you are the proper level.

I liked The Crew’s progression system, but it has one fatal flaw.

Giving the player a level necessitates giving the story missions required levels. Some have to be easy beginning missions that dole out tiny rations of experience, while others are more challenging.

The missions are grouped into difficulties by region. Players start in the Midwest, then work their way through the East Coast, The South, Mountain States, and West Coast.

This system manages to negate The Crew’s cool open-world concept. Players are free to travel anywhere, but they can’t actually do anything until they are the appropriate level. When I drove to New York after firing the game up, all of the playable pastimes were locked because of my meagre level.

It’s a really unfortunate problem, and I don’t have an answer for it. I wouldn’t want to see the progression system killed, but an open-world driving simulator should allow players the freedom to play missions throughout that world whenever they want.

At times, I truly enjoyed it. Its tremendous scope, solid visuals, and great customization options make a strong impression on a novice wheelman like myself.

But as the story killed my dreams and dragged them through the mud somewhere near Phoenix, Arizona, I just couldn’t maintain my enthusiasm. Malfunctioning features and confusing development choices finally laid my aspirations to rest.

It wasn’t terrible. Maybe I will play it again. And maybe I will wake up in a cold sweat after dreams of masochistic racing missions.

The Crew is out now for PS4, Xbox One, Xbox 360, and PC. Ubisoft provided GamesBeat with a retail PS4 copy of The Crew for the purpose of this review.