When Apple opened up iOS to third-party keyboard apps this year, a slew of startups rejoiced as the move effectively opened up their service to hundreds of millions more users.

One of those companies was San Francisco-based Fleksy, which arrived on the scene shortly after iOS 8 launched with a system-wide version of its popular keyboard app.

While Fleksy competitor SwiftKey has moved to a freemium pricing model instead of charging for downloads, Fleksy has stuck to its premium guns, with users paying $1 to access the app. But Fleksy has also followed SwiftKey’s lead by introducing a premium themes store that lets users dress their virtual keyboard up, available through $1 in-app purchases.

Today, Fleksy is lifting the lid on its next moves to monetize the app on Android and iOS.

What Fleksy has in Store

In addition to a general redesign and a bucketful of new themes, Fleksy has overhauled its in-app store, which is now divided into Themes, Extensions, and Sizes. It’s here where you customize the app, purchase new themes, and more. But it’s the Extensions that are particularly interesting. 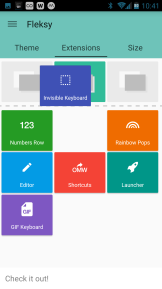 Now, you can drag-and-drop extra functionality to your keyboard, which lets you add features such as a numbers row.

Feeding in to Fleksy’s new monetization model is the ability to purchase additional slots, so you can have more than three Extensions at any given time, and there’s scope for the company to add even more Extensions to the app over time.

While other keyboard apps also let you customize your themes, and SwiftKey already includes keyboards with number rows on them, Fleksy is looking to move further beyond plain text with the inclusion of a GIF extension.

Yes, the seemingly never-ending deluge of animated images online is set to continue, with Fleksy now letting its users search and send GIFs directly from their keyboard, similar to what Riffsy is striving for with its own standalone iOS app. 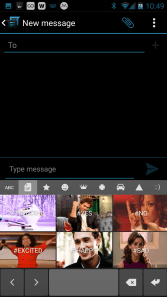 With the latest update, Android users will have exclusive access to two Extensions — Launcher and Invisible Keyboard. The former pulls together your most commonly used apps to make them more readily available from the keyboard, while the latter lets you type with the keyboard hidden — you see just a faint outline The keyboard area is shown with a faint outline on your screen.

Digging a little deeper into Fleksy’s latest update reveals some interesting nuggets that reflect a bigger trend in the keyboard app space.

Today’s move is revealing on a number of levels, beyond that of simple monetization.

Earlier this year, Fleksy launched its in-app theme store just six weeks after SwiftKey, and now it’s also launching branded themes just days after SwiftKey. Clearly, there is a great degree of synergy between these companies.

Fleksy does offer a slew of neat unique features too, as you’ll see with its new Chameleon theme, which changes color depending on what app you’re using.

The third-party keyboard app space is certainly heating up, and with $6 million invested in Fleksy — $2 million of which arrived just a couple of months back — it’s clear the pressure’s on to ramp up the revenues.

There are many examples of how lucrative digital content can be for companies. Messaging app Line has sold $30 million worth of user-generated stickers alone in the first six months. So it’s clear that Fleksy, SwiftKey, and others in this space are on to a winner, with personalization at the core of their respective offerings.

“Customization is extremely important to our users,” explains Fleksy COO and cofounder Ioannis Verdelis. “We’re excited to meet that need through an unprecedented level of customization with our biggest theme update ever and the launch of Extensions. These Extensions are just the beginning too.”