If you wanted to know what the Xbox One exclusive Sunset Overdrive is all about in a few words, just take a look at these song lyrics from its brash, unapologetic soundtrack.

“Gonna have a party, fuck you. I can’t think of nothing better to do.”

“Gonna have a party, eat shit. We’re all about to die, so make the best of it.”

The third-person-shooter-meets-open-world-traversal game doesn’t really care about being the glossy, by-the-numbers adventure that most big-name gaming company executives would want it to be. No, it’s all about giving players a stylized sandbox where they can cause chaos with outrageous weapons. As a result, a radio-rock playlist would just not make sense for Microsoft Studios’ misfit. That’s why the publisher brought in music-industry veteran Gregory J. Gordon of Pyramind Studios to provide some colorful tunes.

We spoke with Gordon, the music producer for Sunset Overdrive, about the game’s sound right after a compilation of its signature tracks hit iTunes, Amazon, and Spotify.

“The game has a lot of humor to it,” said Gordon. “It’s apocalyptic, but it’s like, ‘Yeah, the world’s coming to an end, and we’re getting killed by a bunch of zombies … but we’re going to have a good time no matter what.’

“There’s that duality of, ‘This has gotta be intense because we’re killing mutants to survive, but we’re also having a really good time doing it.‘” 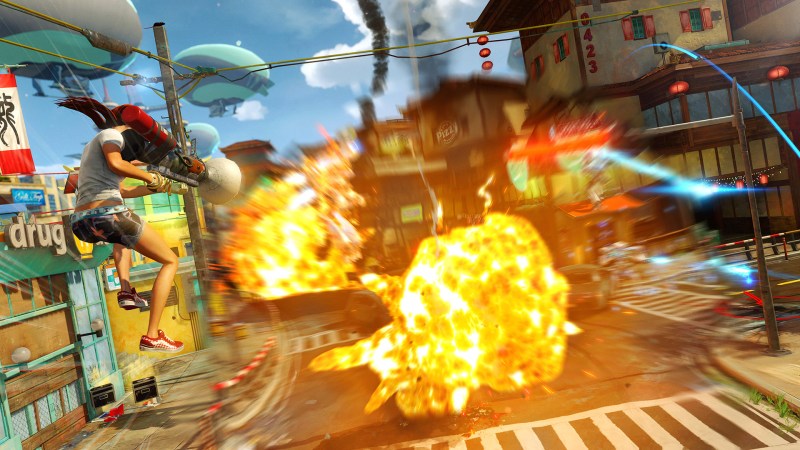 While the bulk of the soundtrack has a punkish garage-rock feel, the audio jumps from the guitar-heavy stuff to synthesized electronic fare depending on whether you’re fighting the zombie-like OD or high-tech robots from Overdrive’s primary antagonist, Fizzco.

“We were looking at all these different styles. … Marcus Smith [of developer Insomniac Games], who’s the creative director on the project, was really into the whole new-punk garage movement. … He was giving me a lot of ideas,” Gordon said. “He wanted this raw energy with heavy guitar, banging drums — and not overproduced.”

But a little electronica made it in as well. “When we’re killing mutants, it’s all about the high-energy garage sound, but when we’re battling Fizzco Corporation, let’s … really focus on electro-house,” Gordon said.

“I was able to work with each of the bands … talk about the lyrical direction, talk about the sound. … We were able to really guide the sound of the game this way and make sure that all of the songs had a cohesive feel to them,” Gordon added. 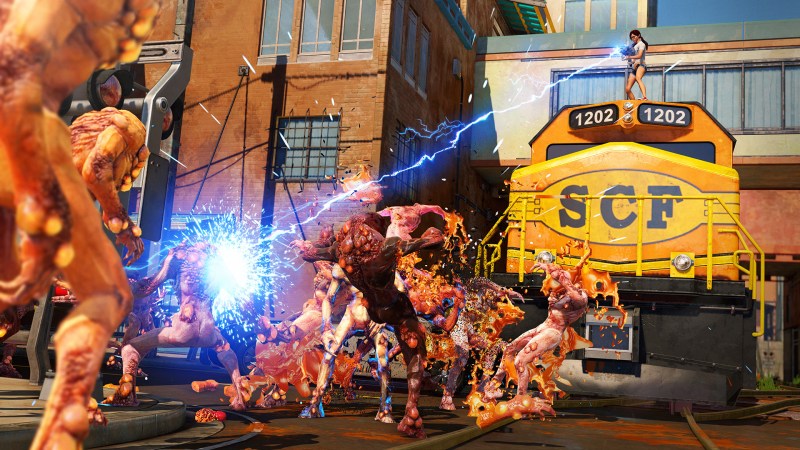 Working with both Microsoft Studios and Insomniac proved to be an equally smooth experience. “Once we had that [musical direction], they gave us a lot of creative freedom to basically go in the studio and make it happen.”

Part of that freedom came from Sunset Overdrive’s mature rating, which gave Gordon license to experiment with song lyrics and themes. “That was what I was pushing for all along, which is why I didn’t want to do instrumentals. I said, ‘You know, if you want punk, if you want raw, if you want rock, we gotta just let it fly.’ And I challenged the bands to do that, and I came at them with that approach.”

Sunset Overdrive’s end-of-days setting wasn’t the only thing that influenced the audio. “It’s really the gameplay experience and the weapons and the interaction in the game that inspired the music more than anything,” Gordon said.

“One of the coolest things is the interactivity experience you get out of the music. The way we did it … we produced all these sub-mixes. So, if you get into a scene, you may not hear the whole song at first. You’ll hear the drums. And then the drums and bass. And then the guitar kicks in. That’s based on the intensity of the gameplay,” Gordon said.

“I think that really works great with this game because the energy and intensity of grinding and hanging off the rails … works well with the really biting guitar sound,” he said.

Gordon gained experience from previous efforts on marquee releases like God of War, Halo: Combat Evolved Anniversary, and World of Warcraft: Warlords of Draenor. But his time with Sunset Overdrive was especially memorable. “For me, this was probably one of the most rewarding video games I’ve ever worked on,” he said.

Overdrive’s audio followed a separate path from the epic scores Gordon contributed to on other projects. “It’s a whole different approach. … We got to do this all in-house and in smaller studios and do it with that more DIY approach that rock bands are employing today.”

Through all of the hard work, Gordon believes he ended up with a heartfelt product — one that wears its purpose on its tattooed sleeve.