The Xbox One is a great device for playing games, watching livestreams, or even taking in an NFL tilt. But as of last week, it’s also a gadget you can use as a learning tool.

The Khan Academy debuted a free app on the Xbox One on Tuesday, Dec. 9. While it may seem strange for an organization that focuses on free online education tools to appear on Microsoft’s flagship home console, the move makes sense when you consider this as another way for the system to stand apart from the multibillion-dollar console war-leading PlayStation 4, which has no apps for learning.

“We’re always looking for innovative, new experiences to share with our fans on Xbox. The addition of Khan Academy on Xbox One is an important milestone in our commitment to delivering rich and differentiated apps on the platform,” said Chris Meador, Xbox’s director of product marketing. ” The Khan Academy app covers a ton of useful topics and includes thousands of educational videos, plus the Xbox One interface makes it easy to use on your TV.”

The Khan Academy’s videos are on YouTube (which also has apps on all of the major gaming consoles), and now Xbox One owners can access this material via its Live app. The online education-tools company thinks its new product makes it even easier to learn on Microsoft’s console. 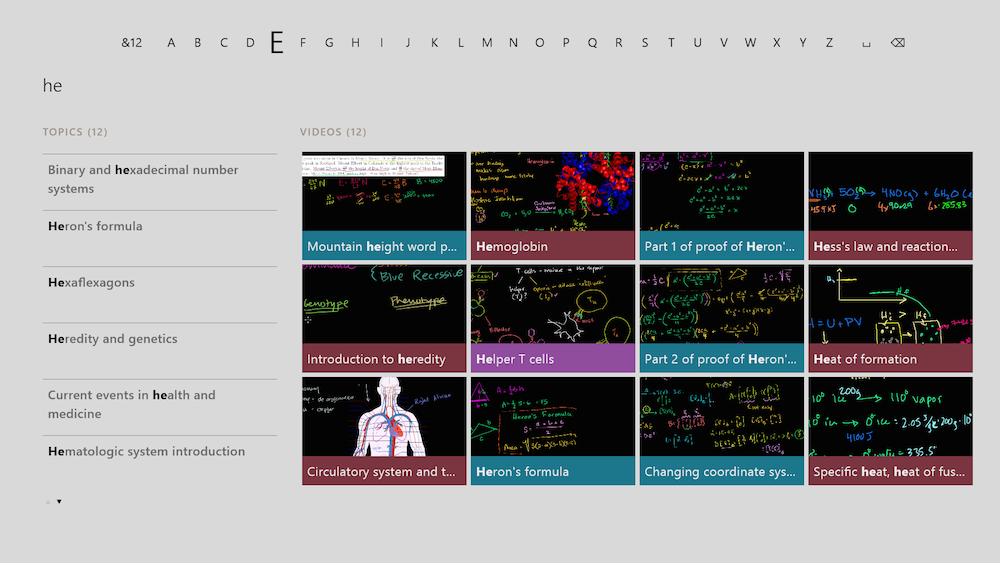 Above: How the Khan Academy looks inside the Xbox One.

“We’ve heard from many students who want to watch Khan Academy videos in a lean-back experience on their big screen and are excited by the ease of use in Xbox One apps,” a Khan Academy spokesperson said via e-mail. “Microsoft has been a great partner in bringing a free, world-class education to students around the globe.”

The Khan Academy began planning the app “earlier this year,” the spokesperson said, not adding any specifics on the timeline. It has no use stats thus far, but it’s “excited to see how students use the app.”

Microsoft has no usage numbers at this time, either. “We’re thrilled that Khan Academy is available now on Xbox One in Australia, Ireland, Canada, New Zealand, the United Kingdom and the United States. While we don’t breakdown our Xbox Live membership numbers by region, there are currently more than 48 million Xbox Live account holders on Xbox One and Xbox 360,” a company spokesperson said.