Marvel Entertainment knows a thing or two about shared universes. Its superheroes interact with each other all of the time in the comic books, and Marvel’s movie studio successfully replicated that formula with its “cinematic universe” of TV shows and blockbuster films. The company hasn’t done anything nearly as ambitious for its video games, but if you’ve been paying attention, the seeds are already there.

I started noticing it a few months ago when I downloaded Spider-Man Unlimited on my iPad. One of the resources you earn in that game are purple gems called Isotope-8 (Iso-8 for short). You get them by either playing through levels or buying them in batches with real money. The thing that bothered me was that I knew I saw Iso-8 somewhere before … and then it clicked. Iso-8 was in the Avengers Initiative mobile game that I reviewed here more than two years ago. I also remembered seeing it in Gameloft’s Iron Man 3 and in Marvel: Puzzle Quest on PC.

So when Iso-8 popped up again in developer Kabam’s Marvel: Contest of Champions (released on Dec. 11 for iOS and Android), I knew I had to get some answers. I jumped on the phone with creative director Cuz Parry and Marvel vice president of business development Sean Haran to find out what the hell is going on with these weird space rocks.

“I think it’s our attempt to connect — even if it’s a loose thread — the games that we’re creating day-to-day,” Haran explained. “Obviously, our [movie] studio making the Marvel cinematic universe has kind of painted a template for how to do that in a huge and compelling way. The Marvel games group is aspiring to eventually achieve that level. And by taking little things that get people familiar with the games and carry it over from one thing to another — that little bit of familiarity and connective tissue opens the door for other possibilities, be it storytelling or crossover events or other things like that.

“It’s part of our long-term strategy to try to find a way to do that in a cool, fun way that doesn’t feel shoe-horned or jammed in there.”

Iso-8, which doesn’t exist in the comic book world, first appeared in Marvel: Avengers Alliance in March 2012. It seems to have two purposes: to serve as a crucial piece of the free-to-play business model (you can buy it with real money or with other types of virtual currency), and in some cases, act as a plot device. Developers use it to fulfill one or both of these categories. 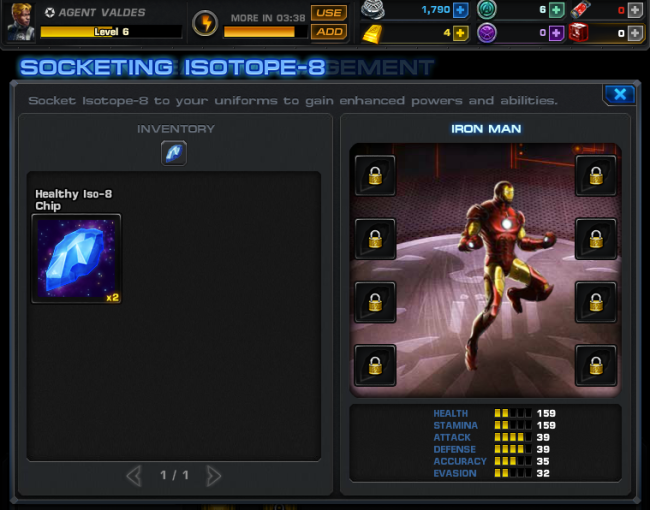 Above: In Avengers Alliance, you can attach Iso-8 to your gear.

“From a design perspective, it was a no-brainer for us because it’s exactly what Sean said: It’s familiar,” said Parry. “I’ve played lots of Marvel games, so I know [what it is]. It’s the material that I use to upgrade. Avengers Alliance has been using it for years, and they’ve gone into it, but nobody really knows what it is. Part of what we undertook initially was, ‘Well, we’re going to tell more of the story of Iso-8. The Iso-Sphere is this source of power and it explains why all these people have a level playing field when they’re fighting. … Purely from a design mechanic, it was great. We needed an upgrade material, and this was it.”

Contest of Champions introduces the Iso-Sphere, a substance that The Collector describes as a “powerful orb” made up of Iso-8 stars. It’s the prize for winning the tournament (you’re trying to beat Kang the Conqueror by amassing an army of heroes and villains). Helping Kabam with the next chapter of the Iso-8 story is writer Sam Humphries, who’s also the author of the monthly Legendary Star-Lord comic book for Marvel.

“Originally, [Iso-8] pulsed from space, so we’re going to the source,” said Parry. “That’s how we’re taking it. ‘Why are we having this contest of champions in this cosmic nexus? Well, maybe it’s close to the source of Iso-8.’ Without giving away too much, that’s what we’re thinking.”

I’m not expecting a Puzzle Quest: Contest of Champions Unlimited crossover any time soon, but the idea that Marvel is trying to establish a shared storyline at all is impressive. Iso-8 and other common plot elements could end up being a clever way of keeping hardcore fans hooked (and spending money) on existing games while also making them anticipate future releases. 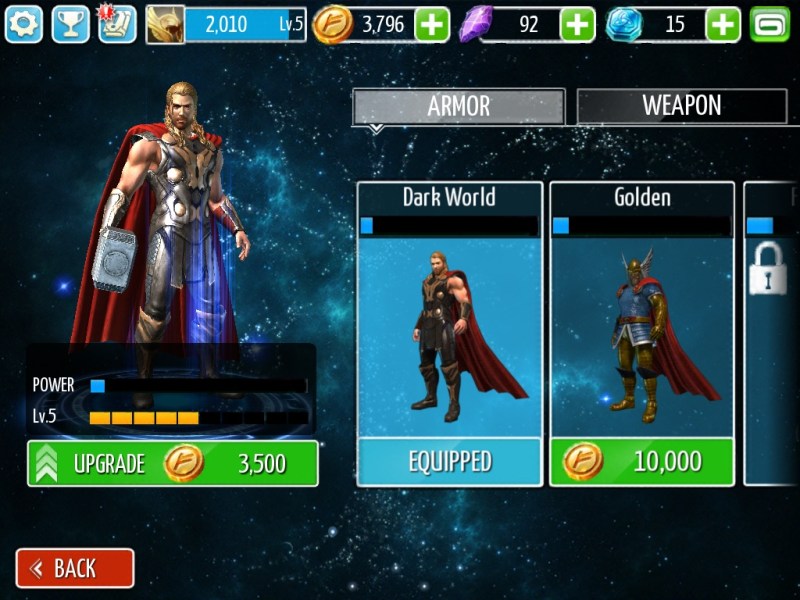 Above: Thor: The Dark World (based on the movie of the same name) also uses the purple version of Iso-8.