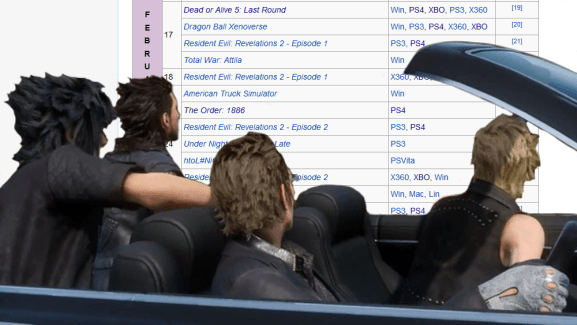 In the last two years, we’ve dealt with the industry shifting from a publisher-centric business to a more developer-friendly environment, and we’ve plowed through the critical initial 12-month cycle of the PlayStation 4 and Xbox One. For content creators, this makes 2015 the year of put up or shut up.

With this big year looming over us, I asked my GamesBeat comrades to take a break from arguing with each other over the game of the year for 2014 and tell me about their most anticipated release of 2015.

Sure, perhaps your most anticipated game isn’t on this list, but give me a break. 2015 is going to be huge, and I can’t possibly write a description for every exciting game that is promised to hit in the next 12 months. If you think we missed something major, by all means, tell us and help plug the holes in this list.

We were pleasantly surprised by Turtle Rock’s “me vs. them” multiplayer concept, where one player takes the role of a powerful boss monster, while everyone else in the game teams up to hunt and kill the playable beast.

Our editors were so impressed that an early playable demo of Evolve took away two E3 nominations from GamesBeat staff. With an original debut date of October, we were hoping this would be one of the games to invigorate the holiday season’s release schedule.

Evolution, it seems, needs more time than Turtle Rock had expected. As Evolve has been pushed back to February 2015.

Sony’s Victorian answer to the Gears of War franchise has been on our radar for some time now. In fact, this will be the second year The Order: 1886 has appeared on our most anticipated games feature.

Since that 2013 article, developer Ready at Dawn has been releasing a ton of gameplay footage showing off a third-person cover shooter. Just instead of chainsaw bayonets and ‘roided up aliens, we’re seeing 19th century prototype rail guns and werewolves of London.

Like Evolve, we were hopeful The Order: 1886 would inject some excitement into the PS4 and Xbox One libraries during its first 12 months. Unfortunately, its launch has been shoved back to February. Between this and Evolve, February is going to be a busy month for action games.

I know what you’re thinking: “Zombies? Great! What could they possibly do that is interesting with zombies?!?” How about a parkour zombie game?

I know, I know, on paper it sounds silly, but developer Techland may be executing something fun with Dying Light. Players take on the role of a free-running expert, who during the day must master an urban obstacle course while trying to locate supplies. All of this daytime scavenging is in preparation for the night, when all hell breaks loose and the zombie horde comes out in full force.

It has a slight “Spider-Man of the Dead” angle going on in the gameplay as well. Players have grappling hook that helps them to swing around the landscape like our favorite web-swinger. Some heroics are even involved, as it has situations where civilians require rescuing.

Techland also recently announced a new multiplayer component in which one person plays as a grappling hook-swinging superzombie. This anti-alive antihero can terrorize human players and act as a disruption for their multiplayer game. 2015 sounds like it is shaping up to be the year of the playable boss multiplayer modes.

The Galactic Civilization series is the darling of the sci-fi 4X (eXplore, eXpand, eXploit, and eXterminate) genre. Maybe it should be the four Es?

Previous entries have received a ton of praise for offering players an incredible amount of depth when it comes to planet exploration and civilization building, making their interstellar manifest destiny a rich experience.

If you’re anxious to try out the latest chapter and get in on some alien backstabbing, Galactic Civilizations III has been available as a Steam Early Access title since spring. This early version is limited, however, given that it’s in an unfinished state.

Luckily, the target date for completion appears to be some time in 2015. So if you’d rather put your space dictatorship fantasies on hold until it’s finished, you may not have that long to wait.

We’ve reached the two-year mark since Naughty Dog first teased us about the return of modern-day treasure hunter Nathan Drake. Between then and now, the project has seen some noteworthy shifts. Specifically, series creative director Justin Richmond took a hike for Riot Games and writer Amy Henning moved on to Visceral.

In their place, Naughty Dog has brought in Bruce Straley and Neil Druckmann of The Last of Us fame to take control. It’s going to be interesting to see what sort of Uncharted chapter will result from this talent swap.

Regardless of the politics behind the curtain, Uncharted 2: Among Thieves and Uncharted 3: Drake’s Deception were critical juggernauts, receiving a ton of game of the year nominations and astronomical scores. Many consider these as the modern benchmark for action adventure games. So it is obviously on everyone’s radar.

Hopefully, it can live up to the high expectations set by the previous chapters.

The Metal Gear games are tricky beasts to talk about prerelease. Hideo Kojima, the creator of the series, is known for teasing his audience with his own style of disinformation. After all, he’s the guy who convinced us Sons of Liberty was about Snake infiltrating a tanker, which wound up being about Raiden running around on an oil rig.

What we know for certain is that Metal Gear Solid V: The Phantom Pain is going to be set in an open world. The disappointingly short prologue, Metal Gear Solid V: Ground Zeroes, at least gave us a taste of what this new structure is like. Although main objectives still require a linear progression, it has side missions placed throughout the map that you can complete at a more leisurely pace. Time of day and weather conditions also affect the ease of finishing these side goals.

What does Phantom Pain bring to the grand narrative of the series? Well, I’m not even going to touch that one. Part of Metal Gear’s appeal has been the batshit insane storyline that requires a whiteboard diagram to piece together. Even then, it’s about as clear as a madman’s fever dream (although sniffing the markers while drawing up the diagram may provide clarity). Kojima claims this will be his final Metal Gear, so this may bring closure to the madness.

But this isn’t the first game in the series where he has announced retiring from the franchise. Everything related to these games is questionable, even the state of its creator’s career, which is one reason why the franchise has kept us engaged for the last 20 years.