Turtle Rock Studios and 2K Games have announced Evolve, the squad-based first-person shooter, is heading into open beta next month on Xbox One.

January 15 through January 19, Xbox One owners with an active Gold subscription will be able to download and play Evolve’s marquee Hunt mode online, which pits four player-controlled hunters against one player-controlled monster. The first two monsters — Goliath and Kraken — and the first eight already announced hunters will all be playable across 12 maps.

In addition, starting January 17, Xbox One players will also gain access to Evolve’s newly unveiled Evacuation mode, which plays out like a dynamic five-day campaign. On each day of Evacuation, a random game mode and map type can be selected, with rewards in the form of dynamic map events and perks helping the winning team from the previous day.

Xbox One owners will be able to play Evacuation through the end of the beta on January 19. Any monsters or hunters unlocked during the beta will carry over with their accounts to Evolve’s official launch.

The companies announced smaller “technical tests” will take place for players on PC and PlayStation 4 after the Xbox One beta period begins. 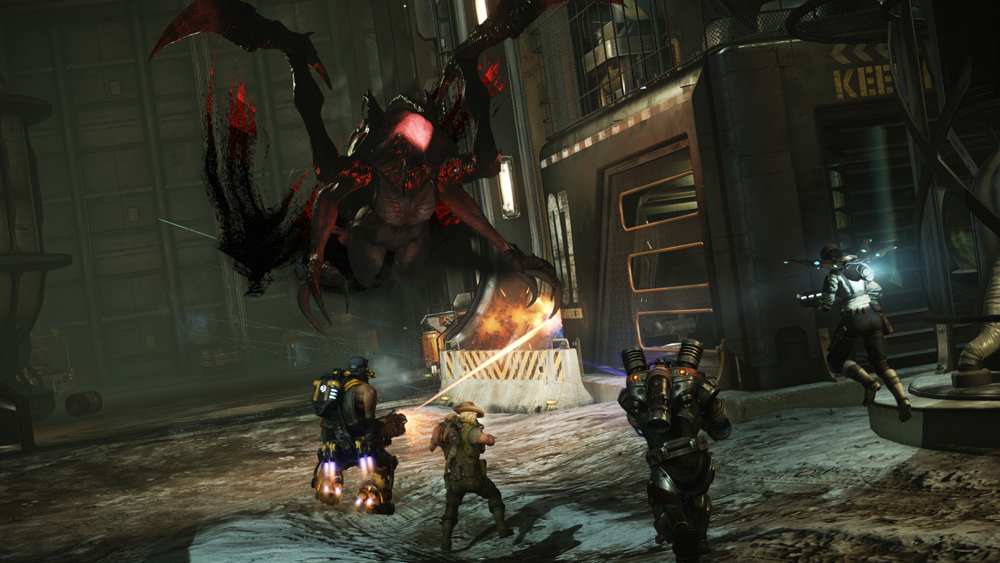 Above: Moments before Evolve’s hunters end up in the belly of the beast.

Beginning January 16, PC players who were invited to participate in the Evolve Big Alpha earlier this year will automatically be given access to this technical test. Similarly, anyone with Left 4 Dead or BioShock Infinite in their Steam library will also be invited to join.

PlayStation 4 owners who were previously invited to Evolve’s Big Alpha test and currently have a PlayStation Plus membership will be invited to a smaller technical test on the platform beginning January 17, with emails now being sent to notify those that apply.

Unfortunately these smaller technical tests on the PlayStation 4 and PC platforms will be “limited in scope” and will not include the new Evacuation mode or have unlocked hunters and monsters carry over into launch.

Turtle Rock Studios also announced Evolve’s third and final on-disc monster, the Wraith, which will join the others when Evolve launches Feb. 10 on PlayStation 4, Xbox One, and PC.