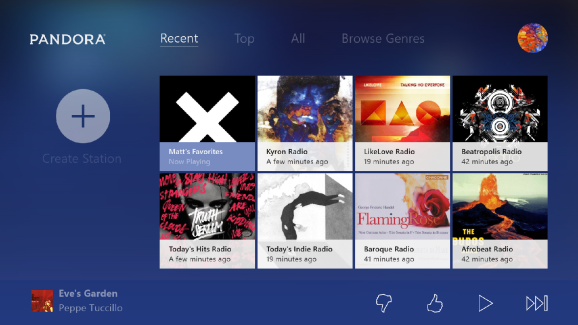 A screenshot of Pandora's new native Xbox One app.

Digital radio service Pandora is finally showing some love to gamers today with the launch of a new application for the Xbox One.

Despite being one of the largest streaming music services, the company has previously opted to devote its resources to building a HTML5 web app optimized for television screens rather than develop native apps for game consoles. Considering that these devices pull double-duty as streaming-media machines, this might seem like an odd decision, but it was part of Pandora’s strategy to focus less on platforms and more on building a cohesive user experience across many devices, as VentureBeat previously reported. Also, the new native app makes lots of sense because of a huge opportunity to extend Pandora’s advertising efforts from mobile devices to the living room (via connected TVs, set-top boxes, and smart home audio systems).

Related: Why Pandora wants to grow its presence on connected TVs with a new HTML5 app

For Microsoft, onboarding a native Pandora app helps make the Xbox One’s media capabilities more attractive than Sony’s PlayStation 4, which is outselling the Xbox One in the multibillion dollar game-console war. Regardless, it’s nice to see that Pandora is staying conscious of gaming systems beyond just the HTML5 app, which you can be access through a console’s native web browser.

The Xbox One app itself, which is still based on HTML 5, enables you to navigate through Pandora using motion gestures and voice commands via Xbox Kinect. The app will also let you continue playing music on Pandora while playing video games, which is actually really cool.

In addition to the Pandora app, Xbox One owners are also getting new apps for Bravo, Telemundo, and Popcornflix. And Pandora isn’t the only music service coming to the console today, either. Streaming music video service Vevo also announced a new native Xbox One app. In a blog post, Vevo disclosed that last month it saw users spending 87 minutes using the service from its TV apps, which sort of reaffirms Pandora’s new stance on catering to game consoles and connected TV.