Good news, Disney Infinity 2.0 players: It’s time to get your girl on.

When the figure-adventure game sequel first released this fall on nearly all platforms, it suffered from a serious lack of estrogen. The Marvel-themed packs offered just two female characters: Black Widow from the Avengers and Gamora from Guardians of the Galaxy. At least they didn’t put Black Widow’s butt in the starring role in the promotional materials. For a house that built its fortune on the backs of princesses, it was a serious gap.

But a new set of Disney Originals figures is now helping to tip the balance … sort of. Characters include Merida from the movie Brave, Tinkerbell, Jasmine from Aladdin, and Maleficent. In fact, more female characters are in the bunch than male (especially if you don’t consider non-humanoids like the robot Baymax from Big Hero 6, and what sex is Stitch supposed to be, exactly?). It’s a princess invasion!

Unfortunately, these characters are more limited than those from Disney Interactive’s original Disney Infinity 2.0 play sets — but more on that in a bit.

The figures are beautiful in game and out, with a deliberately matte, plastic appearance in game that’s still smoothly animated. I put the new figures, male and female, to the test to see which was truly more fun to play. (Jasmine wasn’t available for this test, but that’s all right. I had no spare male character with which to compare her.)

Round 1: Merida versus Donald Duck 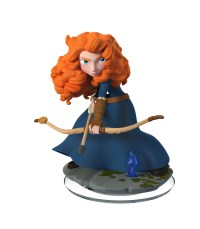 Above: Disney’s figures are well-crafted and attractive.

Merida, the red-haired heroine from Brave, is a fighter in Disney Infinity just like she was in the movie. Nearly all her special moves are focused on combat, with most being enhancements to her bow and arrows. She can shoot with that bow, hit things with it, swipe with a sword, and perform the usual ground-slam type attacks that all Disney Infinity 2.0 characters have.

Her special abilities enhance those attacks, giving her fire, frost, or exploding arrows, for example — or a nifty sword attack that dramatically breaks blocks. She feels like a good fighter in combat, and her graceful leaps and rolls mesh well with all the shooting. But her personality doesn’t show, other than her occasional quips; her abilities could be shared by a half-dozen other archers from other stories.

Donald’s attacks, in contrast, are all about personality. He can hurl random household objects, throw a fit (complete with punctuation marks floating over his head), hammer everything in his path, or hit a combo finisher that smacks his opponent in the head with a broom. Above: Donald Duck, in all his cranky glory.

Picture all that with a never-ending stream of duck-like Donaldese — if you don’t remember what that sounds like, just ask your favorite kid — and you’ve got the idea. His ranged attacks are weak at best, compared to Merida, which makes him less survivable in combat. But he is so much fun to play. The only major drawback: He can’t fly. He’s a duck, fercryinoutloud.

Round 2: Tinkerbell versus Aladdin 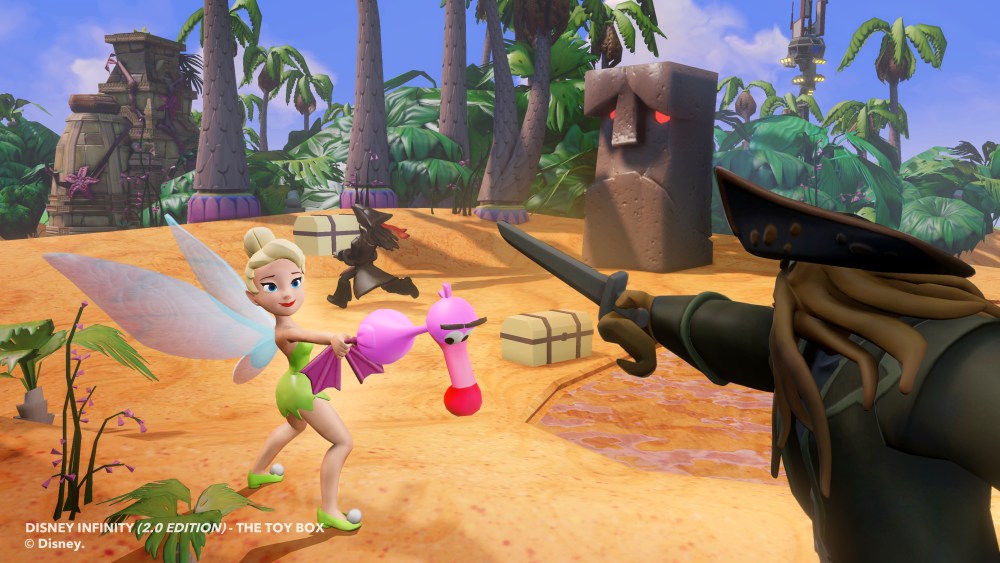 Above: Tinkerbell may have poofs on her shoes, but she’s tough in combat.

I was completely prepared to hate Tinkerbell. “She can heal!” the promotional materials helpfully pointed out. Ugh. Tinkerbell, the original scamp? Reduced to healing people?

I shouldn’t have worried. Most of her abilities are goofy fun. She can fire bursts of pixie dust at other people that make them sail up into the air, unable to control their actions. Your enemy can’t do anything else while they’re flying, making them vulnerable to other attacks, especially if Tink is paired up with another ranged character. She also has that healing magic plus fairy dash, which makes her teeny and sends her bouncing around for some serious fun. 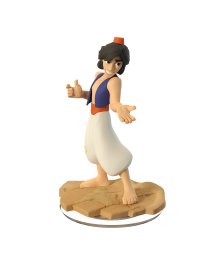 Above: Aladdin has great routine animations, but his special moves frequently lack pizzazz.

She is also one of only two girl heroes in all of Disney Infinity 2.0 who can fly. Jasmine, who wasn’t available for our test, is the other, but she has to cheat with a magic carpet.

Aladdin is animated in the parkour style of his movie character. He can jump really far and has no fewer than five special abilities, but unfortunately they all look a little alike. All seem to involve swirling a scimitar around in circles, whether to deflect ranged attacks or suck his enemies in for the kill.