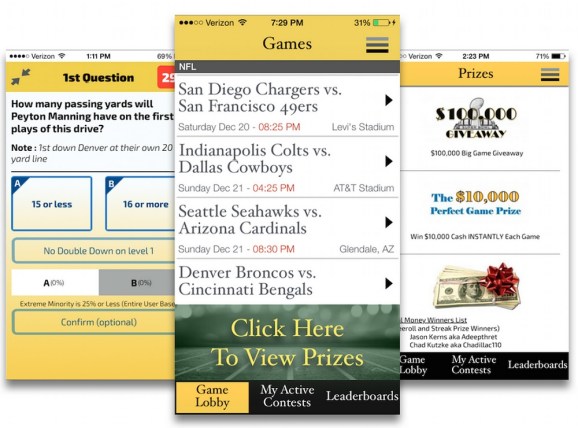 King of the Hill Sports

You can now make a buck (or more) off telling your buddy that Green Bay Packers quarterback Aaron Rodgers is going to toss a touchdown pass on the next play.

Valentine & Winthrope Holdings has launched its King of the Hill Sports app on iOS to let people make predictions during live sports events. It’s a “second screen” game that’s all about getting bragging rights with your sports knowledge. And you can make real money doing it.

In contrast to other real-money fantasy sports games, you don’t draft a team ahead of the day’s games. Rather, the free-to-play app asks you to answer questions about a football game as it is being played on live TV. A very basic example of a question would be: “Will Peyton Manning complete at least 3 passes on this drive in a football game: Yes or No?” It’s a new variant among many in the fantasy sports business, which has an estimated 41 million players in North America, according to the Fantasy Sports Trade Association.

Once you answer, you move up or down the leaderboard and get the next question. During a typical football game, users will receive about 35 questions, said cofounder Joseph Dolan. The company will launch a $100,000 Super Bowl contest shortly as a promotion to get more gamers.

The West Chester, Ohio-based company has a team of eight people. Jeevan Betigeri is the chief technology officer. It started in 2013, and work on the game began in 2014. Beta-testing for the company’s web-based version started in September.

“Our game is a series of skill-based prediction questions asked throughout a live sporting event,” Dolan said. “The questions are dynamic and challenge users to consider individual player and team statistics in addition to strategizing around a leaderboard of competitors.”

King of the Hill Sports tries to ask questions during lulls in play, so it doesn’t take the player away from the game they’re watching. And the questions are very creative and specific to the current situation in the game.  It is currently offering just a Free Play version, which costs nothing to play. But they are poised to open for real-money at any time, where players can pay an entry fee to join contests and attempt to make money on their predictions. They will also offer shorter contests, so that players don’t have to commit to playing for real money for a full game.

The company is self-funded. The founders met in college at Xavier University. They’re big sports fans and decided to do a startup together based on their love of sports.

“Fundamentally, our belief is that users are looking for a game that is more sophisticated than, ‘Will the next play be a pass?'” said Dolan. “That will draw people in, but our challenge will be getting those users to tell others about it. Our prizes, referral program, and contest structure are things we believe do that, but we are continuously trying to think of ways to enhance those features.”