Google has integrated AMBER alerts into a number of its products, including Search, for a while already. Now, Microsoft has revealed it is integrating the child abduction broadcasts into its Bing search engine.

AMBER alerts have been used in the U.S. since 1996, a system set up following the abduction and murder of nine-year-old Amber Hagerman. The name also stands for “America’s Missing: Broadcast Emergency Response.”

AMBER alerts are issued across multiple mediums, including TV and radio, but the advent of the Internet ushered in a new means of communicating missing children messages to millions of people, with giants such as Facebook embracing the system.

While it has been a long time coming, Microsoft has now partnered with the National Center for Missing & Exploited Children to issue AMBER alerts once the official go-ahead has been given by law enforcement. 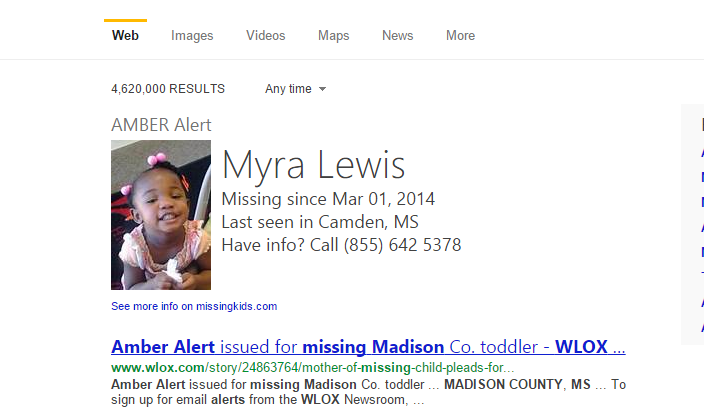 Above: Amber Alerts on Bing

The alerts only show up, however, for “Amber alert” queries when you’re in a relevant location related to the abduction, or if you include the location in your search query.

AMBER alerts have been used to locate and return more than 700 abducted children since its inception, so it’s clearly an effective system that helps get the word out as quickly as possible.