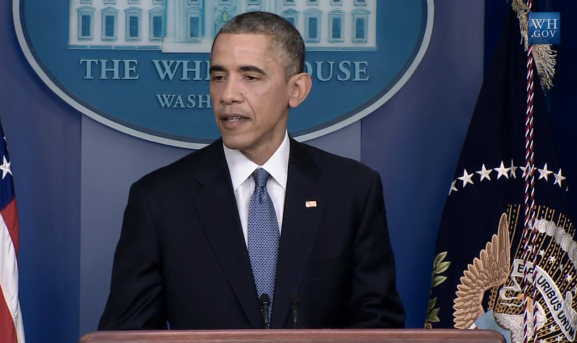 “We cannot have a society in which some dictator someplace can start imposing censorship in the United States,” Obama said.

Sony is a corporation. It suffered significant damage. There were threats against the employees. I am sympathetic. Having said that, yes, I think they made a mistake.

Obama’s press conference occurred hours after the FBI released a statement claiming that North Korea was responsible for the Sony Pictures Entertainment cyberattack.

As we’ve previously reported, the Sony attack “was carried out — at least, in part — due to The Interview, a Seth Rogen and James Franco film that depicts the murder of North Korea’s Kim Jong-un. The film’s holiday release was cancelled due to threats from a hacker group that called itself the ‘Guardians of Peace.'”

For more on the Sony Pictures hack, head here. For more on Obama’s statements today, here’s a direct link to the live press conference: