We’ve seen the future of architecture and design, and it’s at the intersection of biology, computing, and engineering.

While many architects these days put up buildings loaded with energy-saving features and attractive, sustainable design, one company is taking its approach to being green to another level: growing fully biodegradable building materials.

Known as The Living, the small, New York-based architecture firm has pioneered mixing biological technologies with hard-core computing and engineering. This summer, it gained notoriety in design circles with Hy-Fi, a 40-foot-tall temporary outdoor building, made from 10,000 organic bricks, that was showcased at Manhattan’s prestigious MoMA PS1 contemporary art museum.

The Living is aiming to alter the notion of what an architecture firm is, and how its projects interact with the environments in which it builds. One of its driving goals is upending one of the construction industry’s biggest black marks — being the source of 40 percent of the waste in landfills.

“We’re very interested in exploring the buildings and cities of the future,” David Benjamin, the founder of The Living, told VentureBeat. “We really liked and played up the idea that we could take waste material, low-value raw materials, and use no energy to convert them to lightweight bricks and make a building out of them, compost them, biodegrade them, and return them to the ecosystem.” 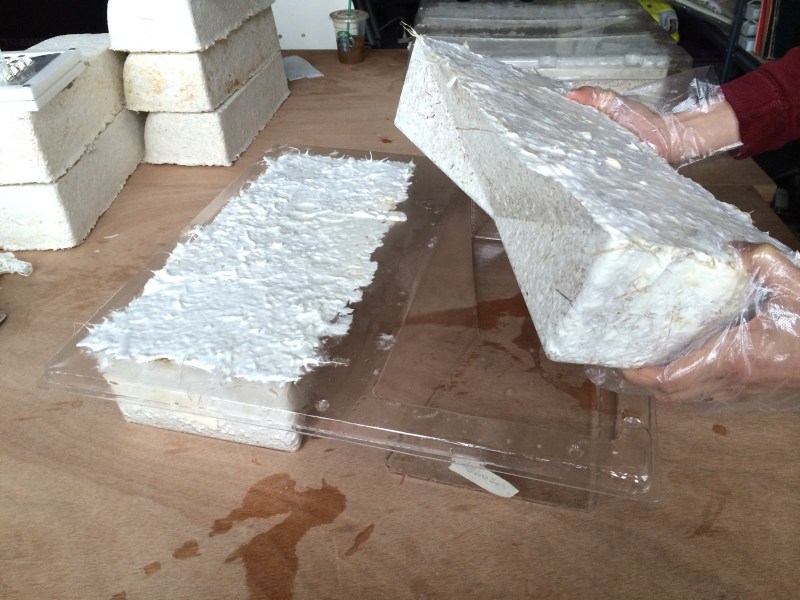 Above: The organically-grown bricks used by The Living to make Hy-Fi.

That explains why each of the bricks used in Hy-Fi were made from corn stalks and living root structures and grown in a lab. Over nearly two months, the company went through eight rounds of testing on the bricks, each time evaluating a new formula and set of parameters against different environmental and structural conditions.

The Living has an evolved sense of prototyping. Instead of exploring ideas conceptually, it goes all the way and builds full-scale functional prototypes, Benjamin explained. Hy-Fi was just such a project — showing that it was possible to construct a building that was made from biodegradable materials, yet which was strong enough to withstand even hurricane-strength winds without the need for any additional load-bearing materials. In a city like New York, which was slammed by Hurricane Sandy in 2012, and which suffered billions of dollars in losses, this could be a valuable lesson for the future.

The project was a critical success, and partly thanks to the type of innovative thinking that led to Hy-Fi, The Living is now in a position to take architecture where it has never gone before.

Normally, architects are consumers of design and modeling software from companies like Autodesk, the leader in the space, yet keep a formal distance between them. But The Living decided to break down that wall, and earlier this year was acquired by Autodesk, which makes tools like AutoCAD, Maya, and others that are used every day in the field. Among architects used to the traditional ways of doing things, this was a big deal.

“People are asking what’s going on here,” said architect Scott Marble, who noted it’s very rare for an architecture firm to be bought by a giant software company. Yet, the acquisition “makes a lot of sense, because Autodesk has quite a big influence on the architecture, engineering, and construction [industry].”

Autodesk and The Living already had a long history of collaborating. And now, the architecture firm will become part of Autodesk Research, the division at the software company that is focused on “the world’s most complex design problems, from pressing ecological challenges to the development of scalable smart infrastructure.” 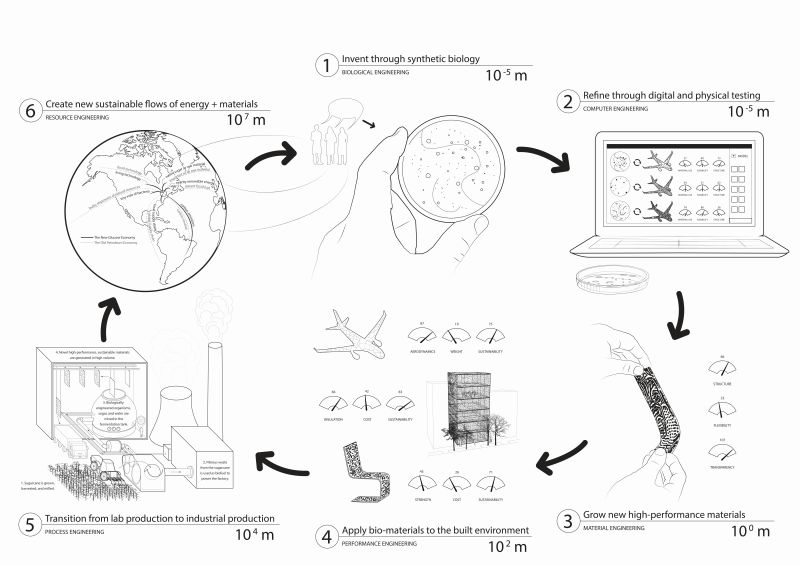 Above: At Autodesk Research, The Living will follow this development flow chart.

For years, Marble, a founding partner at Brooklyn-based architecture and design firm Marble Fairbanks, has known and worked with Benjamin. Both are on the faculty of Columbia University’s Graduate School of Architecture, and have collaborated on research projects around the intersection of biology and computer engineering.

Among architects, Marble said, there’s always been skepticism about being too close to the software side of things. “We talk about should architects write their own software, or should it be third-party,” he said. “With the work [Benjamin is] doing, he’s taking this question on very directly.”

Autodesk itself saw that a future-focused company like The Living could help it turbo-charge its computer-aided design work. “The Living has created a wide range of futuristic designs involving innovative approaches such as using bacteria to manufacture building materials,” Autodesk wrote in a blog post about integrating The Living, “writing algorithms to enhance creativity and explore designs beyond typical rules of thumb, and developing new urban spaces that promote collectivity and culture.” 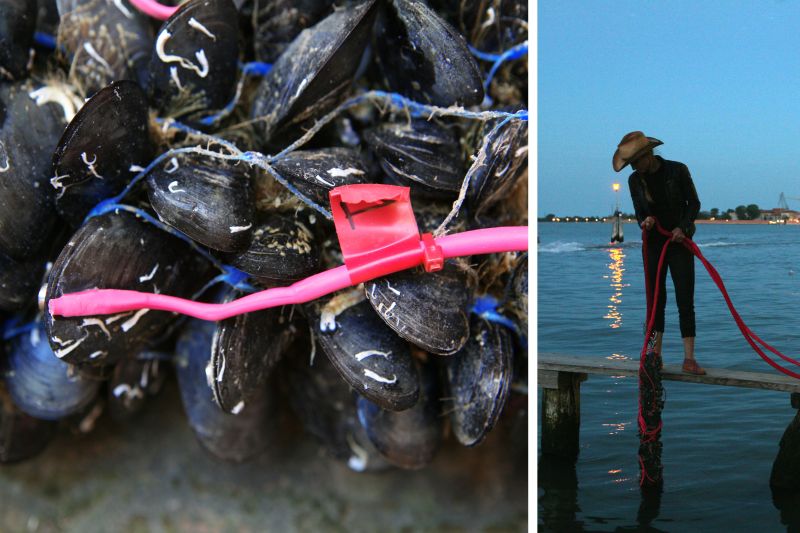 Above: One of The Living’s new projects is a floating pier that utilizes mussels to evaluate water quality.

And it could well be that the kinds of projects Benjamin’s teams work on take directions no one has ever done before. Already, it is incorporating live mussels in a floating pier to track water quality, and designed a building with sensor-laden walls and roof panels at Princeton University that, when finished, will only be about two-thirds enclosed.

That project, known as the Lab for Embodied Construction, involves testing out the design and fabrication of new wall and solar panels, facade elements, and roofing. Part of the building is an open frame to host experiments on the walls, the roof, and other building elements.

“In a way, the building will be completed by the research happening inside the building,” Benjamin said.

The Living itself has benefitted from a new attitude in cities like New York that suffered through the aftermath of disasters like Hurricane Sandy, which caused significant damage and exposed the weakness of some older designs.

“There’s a recognition that it would be helpful and have a bottom-line impact,” Benjamin said, “to design with resiliency, to design systems that can adapt to radically changing conditions. To design cities and shorelines that can deal with unpredictable forces.”

More Sandy-like disasters are inevitable, and Benjamin said he’s seeing more and more public officials — and clients — willing to take a chance on new ideas. Like using organic building materials and relying on the underlying computer modeling and engineering that makes them strong enough to hold up a 40-foot-tall structure.

To Marble, it all makes sense, especially with an innovative risk-taker like Benjamin “getting under the hood” inside Autodesk.

And Marble thinks that what The Living is trying out now could well be commonplace — in 10 to 15 years.

“They take a really radical approach to architecture,” he said. “They try to understand materials, processes, and even the social dynamics of architecture, as a relational set of factors. Almost an ecological system.”