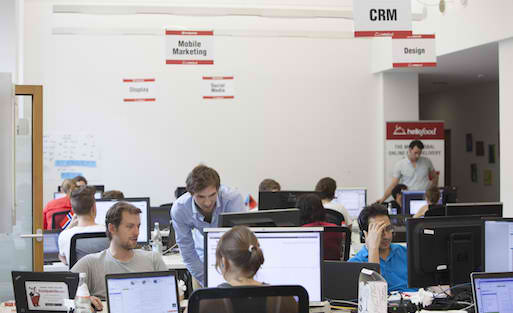 Inside Rocket’s HQ in Berlin.

As Roland Berger’s CEO states in the new issue of Manager Magazin, which will be available on December 19th, the consultancy and Rocket Internet plan a so-called “super incubator” named Terra Numerata.

“Our company will work like a factory and will produce one company with a digital business model after another,” he explains.

That sounds pretty much like what Rocket Internet is doing right now. It’s not only unclear in how far the incubator will differ, nor when and where it will start.

Update (December 23rd, 2014): This venture aims to become the core of a wide-ranging European digital business network that is open to incubators, investors, technology providers, and other digital players. The goal is to bring together firms of different sizes from different segments to help them form alliances and push digital innovation, e.g. by inventing new business models, and thus support the digitalization of the European business world.

“Looking at the world’s top 20 Internet companies by market capitalization, the need for such a platform becomes apparent: None of them are of European origin, while 13 of those companies come from the US and 7 from Asia”, says Bouée, adding “boosting Europe’s share in this market is the key mission of Terra Numerata™”.

We have reached out to Rocket Internet for a comment and will keep you updated.

Update (December 22nd, 2014): Rocket Internet explained that as of right now there are no more details to be shared.

Also: An older version of this article mentioned Bouée became a board member of Rocket Internet in September 2014. This information shared by InternetWorld was incorrect. Instead, it was Roland Berger who became board member. Also, Terra Numerata™ is the name of the Roland Berger’s digital business platform, not of the incubator.